[The following profile of Mahmoud Ahmadinejad first appeared in Asia Times Online (www.atimes.com) on 19 May 2006.  It shows that the President of Iran is winning the right friends (the economically disenfranchised, ambitious men and women of younger generations who are denied political power by the current clerical rulers, ordinary Iranians of middling sorts who simply desire greater personal liberties) and making the right enemies (namely neoliberal “reformists” and clerical gerontocrats, “the mullah–bazaari nexus” in Tariq Ali’s words) at home.  That domestic struggle in Iran, seldom commented on by Western leftists, is as important as the conflict in the international arena over Iran’s right and ability to pursue nuclear research.  Perhaps the social struggle at home is even more important than the international conflict, since it now looks possible that Tehran can come out ahead in the latter, protected by a firmer nyet from Moscow than Washington lets on as well as the multinational ruling class concerns about energy costs — Tehran has already won concessions that must look alarming to Tel Aviv. — Ed.]

TEHRAN — The West is just coming to know the resoluteness of Iranian President Mahmud Ahmadinejad as he doggedly sticks to his beliefs with regard to Iran’s nuclear program, despite the weight of international and domestic pressure building up against him.

To friends and colleagues who have known Ahmadinejad for a long time, though, his perseverance in the face of daunting odds comes as no surprise.

“Mahmud has not changed in the 30 years I’ve known him, at school and at university,” Saeed Hadian told Asia Times Online, saying that Ahmadinejad had an obstinate streak and insistence on justice being served.  “He’s still the same Mahmud.”

On Wednesday, Ahmadinejad continued the plunge into a spiral of confrontation with the West as he rejected a European offer to provide Iran with a light-water nuclear reactor in exchange for Tehran giving up nuclear enrichment activities.  Iran’s nuclear dossier is before the United Nations Security Council, with the possibility of sanctions growing.

Ahmadinejad compared the European offer to giving “a four-year-old . . .  candies or walnuts and taking gold from him in return.”

While the populist rhetoric went down well with the large, open-air audience he was addressing in the central Iranian city of Arak, it is only likely to anger further a US administration seemingly hell-bent on imposing sanctions on Iran as a first step toward depriving it of the full nuclear cycle.

That is unlikely to disturb Ahmadinejad, a previously obscure, mid-ranking politician from a conservative background whose surprise victory in last June’s presidential elections prompted rumblings of fear.  Iran’s middle and upper classes were convinced that Ahmadinejad would order a social crackdown, which has yet to materialize.  But they predicted correctly that the country’s economy would suffer from capital loss.

Last summer, Ahmadinejad made an explosive entrance into the international spotlight.  He directed a combative address to the UN General Assembly in September, made controversial comments that called into question the Holocaust and the future of Israel in November, and was the first Iranian president of the Islamic Republic to address a letter to his US counterpart.

Two weeks ago, he confounded everyone by exhibiting a heretofore unseen liberal side and seeking to cancel a law that bans women from entering stadiums.  He was immediately overruled by the country’s clerical leadership, but reaped great popularity among the crucial secular, liberal Iranian electorate that is traditionally opposed to what he stands for.

Last week, Ahmadinejad was treated like a rock star in Indonesia, by an audience enchanted by the kind of direct rhetorical style that evokes memories of 1960s liberation ideology.  In the Arab world too, increasingly people are expressing admiration for how Ahmadinejad is dishing it up to the West in a way that their own governments do not dare.

“Iran has often been at the receiving end of ultimatums from foreign powers,” said Cyrus Safdari, an independent Iranian analyst.  “The politicians who stood up to these ultimatums are treated as heroes, and the ones who caved are still considered to be traitors.”

So how did a blacksmith’s son from rural Iran manage to become an Islamic iconoclast who defied the West and the Iranian mullahocracy alike to deliver a highly controversial nuclear program to his country?  How did an intensely pious war veteran manage to be elected in an poll marked by the absence of religious symbolism and accented by his rival’s promise to continue the social liberalization characterized by the Mohammad Khatami era?

Naser and Saeed Hadian, two brothers who are childhood friends of the president, describe him as unchanged from the time they knew him.  Still buddies, they all grew up together in the dusty streets of Narmak, a solidly middle-class neighborhood of east Tehran.  Naser recalls playing soccer with the talented Ahmadinejad and other children.

He was as obstinate as a lad as he is now, said Naser.  “[Now] everyone is against him,” said Naser, who studied with Ahmadinejad at the Elm-o Sanat University.  “From the super-secular elite to the super-religious elites, they have all turned against him.  And he doesn’t care.  He says, ‘Let them come, let them vote against me, I have the support of the people.'” 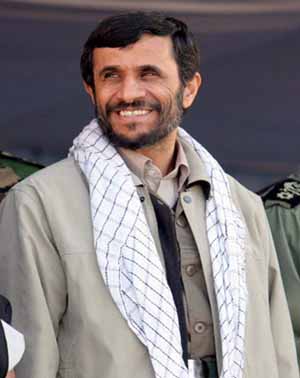 Typical of Ahmadinejad’s temperament is the following anecdote, told by another acquaintance.  In 1997, with newly elected president Khatami spearheading a rollback of hardliners, Ahmadinejad taught engineering classes at his alma mater, Elm-o Sanat University, proudly sporting a Palestinian kaffiyeh (scarf) around the campus.  While kaffiyehs are standard symbols for the pro-Palestinian cause in the West, in Iran they also represent religiosity and a commitment to the hard right wing of the Islamic Republic.

To have worn one in the relative liberalism of a university environment at the peak of the reformist wave indicated his single-minded commitment to the founding principles of the Islamic Republic.

During the eight-year reformist period, Ahmadinejad worked his way up the provincial governorship ladder, eventually becoming mayor of Tehran.  His tenure was marked by the improved organization of what is one of the world’s most chaotic and traffic-choked cities.

In recognition, he was short-listed for an international Mayor of the Year competition in 2004, even as well-off Tehranis cracked jokes about how, if he could, Ahmadinejad’s conservativeness would have extended to his instituting segregated male and female sidewalks, elevators and graveyards in Tehran.

For their part, upper-class Iranians sneer at his common looks and ordinary-Joe appearance, even as Ahmadinejad himself stresses it to appeal to large segments of the electorate.

But those who know him prefer to dwell on his “indefatigable habits of work” and “financial incorruptibility.”  A modest man, he inhabited an unpretentious home in the same neighborhood that he grew up in and drove a Paykan, Iran’s cheapest, mass-produced car.

A talented soccer player and straight-A student, Ahmadinejad sailed through educational and professional hierarchies with great ease.  When he inherited the president’s office, he completed a process of donating all the lavish Persian rugs that used to decorate it to Tehran’s carpet museum.

While Ahmadinejad’s on-the-job performance has won him more fans since he became president, his threat to reform the system and root out corruption has created powerful enemies, including influential clerics.

Some believe that Ahmadinejad’s systematic purge of the foreign service, provincial governorships and key economic posts — and his appointment of mostly former Revolutionary Guard comrades to those offices — is angering an older generation of clerics who see significant elements of their power base being eroded.

Further criticism is prompted by the fact that, whereas the time has probably come for the second revolutionary generation to start taking over, Ahmadinejad’s abrupt manner in effecting this transition is ruffling too many feathers.

In the holy city of Qom, the primary center of Shi’ite scholarship in the world, Ahmadinejad has reportedly upset a number of senior figures.  One senior cleric, Ayatollah Sanei, is more liberal than others and believes in equality between men and women and tolerance among religions.  But when a conversation with Asia Times Online turned to Ahmadinejad and his recent, crowd-pleasing decision to allow women back into soccer stadiums for games, Sanei refused to comment.

“I didn’t sign that letter,” he said, referring to a letter issued by at least four grand ayatollahs that condemned the president’s decision and instantly granted him impeccable liberal credentials.  “I didn’t get involved in that, it was all a game.”

In private pictures taken in 1977 in shah-era Shiraz, a young, beardless Ahmadinejad stands next to his friends.  Wearing scuffed running shoes and an ordinary brown jacket and sporting a solid, left-hand parting in his hair, he looks every inch the opinionated man he went on to become.  He appears obstinately dowdy, every inch the mardomyar (people’s man) that he went on to become. 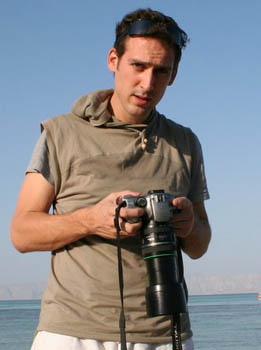 Iason Athanasiadis is a British-Greek film-maker, photographer, and writer who has lived in the Middle East for five years, speaks Arabic and Persian, and has worked for a range of broadcasters, including the BBC, al-Jazeera, and the Australian Broadcasting Corporation (ABC).  He is currently based in Tehran after long stints living and covering Syria, Yemen, Egypt, and Qatar for print, radio, and television media.  Fascinated by the greater Middle East region that stretches from North Africa to the Caucasus and Central Asia, Iason produced two historical films on Saudi Arabia for PBS Frontline, BBC2 and Arte (The Kingdom, King Fahd) after receiving his BA from Oxford University in Arabic and Middle East Studies.  Since then, he has worked on features for national and international broadcasters in Syria, Turkey, Cuba, and Iran.  Also a photographer, Iason is organising an exhibition that aims to challenge international media stereotypes about Iran.  “Iran 1384: Private Persia” is taking place in Athens this fall.  This article is republished here with kind permission of Allen Quicke, Editor of the Asia Times Online.