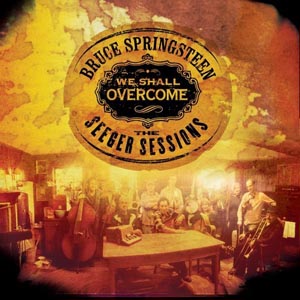 The current Springsteen tour is in support of his new album, We Shall Overcome:The Seeger Sessions, inspired by a request to do a Pete Seeger song for a tribute, which morphed, according to Springsteen, into his own tribute album, which covers a range of songs that Seeger performed.

Despite the threat of rain, thousands of people sprawled across the Saratoga Performing Arts Center’s indoor/outdoor grounds, undeterred by the prospect of hearing songs done to death in coffee houses across the US for the last 40 years.

Springsteen is backed on this tour by a large group of folk musicians and a brass section that includes a tuba, as well as singers and a piano.  Every instrument, from accordion to zither, had a chance to shine during the evening.

Springsteen started the night with a thumping, blasting version of “John Henry” and ended more than two hours later with a quiet, elegiac performance of “When the Saints Go Marching In,” a mournful reflection on New Orleans, a city whose plight he referred to often during the concert.

In between, we heard songs from the album like “Jesse James” and “Old Dan Tucker,” and the spirit of Pete Seeger hovered over Springsteen’s rendition of “Bring Them Home.”

My own personal favorite of the evening and from the album is “O Mary Don’t You Weep,” a spiritual that tries to console with the thought that “Pharoh’s army got drownded,” a parable from slavery days about deliverance from the slave owners, which today makes me think of another kind of  deliverance, that of oppressed nations from the clutches of imperial armies.

Springsteen’s goal on this tour and the album, as he explains it, is to try to see again why these old roots songs can still touch us, to try again to have us “hear” them, after losing them to repetition and the general noise of a culture that is always looking for the next big new thing.  Based on the evidence of the album, and even more so, the concert, I think that he has succeeded.

Is there any other musical artist out there today who could bring out tens of thousands of people to a concert of folk classics that originally were popularized by the radicals of the Thirties?  And not only bring them out, but have them dancing, singing and cheering?

I don’t think so.

Springsteen is unique in his ability to combine anti-war and progressive politics (a term I generally avoid, but in Springsteen’s case I think it applies) with a mass appeal to a white working-class audience still absent from class struggle politics.

I’m glad he’s on our side.  I wouldn’t have missed this concert for anything, and I encourage you to get out to any other performances on this tour.  You won’t be sorry.