Stop the Israeli Attack in Gaza Immediately:
A Statement by the Alternative Information Center

The Alternative Information Center (AIC) strongly condemns the Israeli army’s invasion of the Gaza Strip.  This invasion is a punishment for the results of the democratic Palestinian elections held in January and is irrelevant to the security of the state of Israel and that of its citizens.  Moreover, in the course of this invasion, civilians have been, and will continue to be, killed by Israeli soldiers, Palestinian infrastructure has been destroyed and houses demolished.  These practices are in violation of the Geneva Convention and should be considered crimes of war.

Since the Palestinian elections, Israel has consistently escalated the military tension, assassinating, injuring and kidnapping Palestinians.  Since January, Israel has assassinated 172 Palestinians, mostly unarmed civilians, 50 of whom were killed during the month of June alone.

Israeli attacks against the Palestinians were especially felt in Gaza, which has suffered massive artillery bombing and a continued siege by Israeli forces.  Only a few dozen trucks have been allowed to pass through the Karni crossing each day, to feed a population of over 1.3 million people (who normally require hundreds of trucks per day for a steady food supply).  So far, even threats of starvation have failed to convince the Palestinian people to overthrow its democratically elected government.

Israeli attacks on the Palestinian population have nothing to do with the security of Israeli citizens, but rather are part of Prime Minister Olmert’s war against a democratically elected government, with the objective to overthrow it.

The current incursion in the Gaza Strip does not concern the safety of POW Gilad Shalit, an Israeli soldier.  This incursion unnecessarily risks Shalit’s life and safety.  The use of force prior to even considering an exchange of prisoners demonstrates that Israel’s political goals are of higher priority than Shalit’s life.

The Alternative Information Center maintains that the only way to peace in the region is through the complete withdrawal of the Israeli army and Israeli settlers from all of the Palestinian Occupied Territories, including occupied Jerusalem; the liberation of all Palestinian political prisoners; recognition of the Right of Return of the Palestinian refugees according to UN Resolutions 194 and 242; and full respect for the individual and national rights of the Palestinian people.

The Alternative Information Center calls on the international community to condemn the Israeli occupation of the Gaza Strip and to demand their immediate withdrawal.

Last night and during the early hours of this morning, the Israeli Occupation Force launched a ground offensive in Southern Gaza.  As part of the assault, the Israel Air Force attacked three bridges and the Gaza City power station, cutting power to much of the area.

This power station is used to help pump water from the water network to apartments in Gaza.   As the power has been severed, the water cannot be pumped and Gazans are unable to access water, unless they are prepared to risk being shot on sight in their attempts to obtain water from roof tanks.

The attacks on three bridges damaged water supply networks that provide water to the central area of the Gaza Strip, including two refugee camps.  At present, more than 50% of the population in central Gaza is experiencing water shortages.

Today, Rafah, Khan Younis and Gaza City are similarly facing a water deficit as a result of the shortages of diesel and electricity needed to pump water to Gazan households.  To exacerbate matters, Gazans living in the Alo Shuokah area near the Gaza airport fled their homes as soon as the Israeli incursion started.  They are also in dire need of basic services, including water provision.

Gazans are in the grip of a humanitarian crisis, which will surely worsen unless urgent action is taken to directly restore energy and water supplies.

The Palestinian Hydrology Group calls upon members of the international community to pressure Israel into withdrawing from the Gaza Strip immediately, in addition to ensuring that supplies of water and energy are fully reinstated without delay.

Stop the IDF Crimes in Gaza and the West Bank!
Statement by the Communist Party of Israel (CPI)

The way to achieve security is by termination of the Israeli occupation!

During the month of June, the Israeli Army (Tzahal) killed dozens of Palestinians, including several children, and now is continuing these crimes by the occupation of large territories of the Gaza Strip with the excuse of releasing the kidnapped soldier.  The CPI objects to the killing of Israeli and Palestinian civilians alike.

The CPI calls upon all peace seekers, Jews and Arabs, to denounce the crimes of occupation and to demand the immediate pullout of Tzahal from all parts of the Gaza Strip.

The CPI emphasizes, once more, that security and peace can only be achieved by putting an end to the Israeli occupation, evacuating all Israeli settlements, establishing an independent Palestinian state alongside Israel, establishing two capitals in Jerusalem, and solving the refugees’ question according to United Nations resolutions. 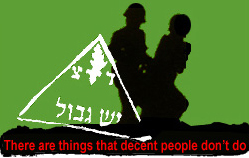 Hadash (Peace and Democratic Front) and CPI members will take part in a large number of demonstrations during the next days all over the country, especially in a demonstration called by the veteran refusers of Yesh Gvul, Saturday night, in front of the Prime Minister residence in Jerusalem, with the focus on military and political leaders responsible for war crimes.  Yesh Gvul plays an active part in trying to bring these military and political leaders to international justice.

The Israeli Occupation authorities have start a new aggression against our people by attacking our lands in Gaza.  This attack was concentrated in Palestinian territories in Gaza, causing complete destruction to our infrastructure — bridges, electricity stations in particular, and works supply.  The Israelis occupied additional areas of our lands and assassinated a lot of our people including civilians.

This new aggression is a part of an Israeli plan to overthrow the Palestinian National Authority and its legitimate institutions. The Israeli army arrested 9 of our ministers and more than 25 members of our Legitimate Council: PARLIAMENT.

You are asked to stand in solidarity with our people and their just cause by demanding the immediate release of our ministers and the members of our Legitimate Council and demanding also an international supervision to secure our people.