To add your signature to this open letter in solidarity, please sign at <bit.ly/2dtPmzP>. 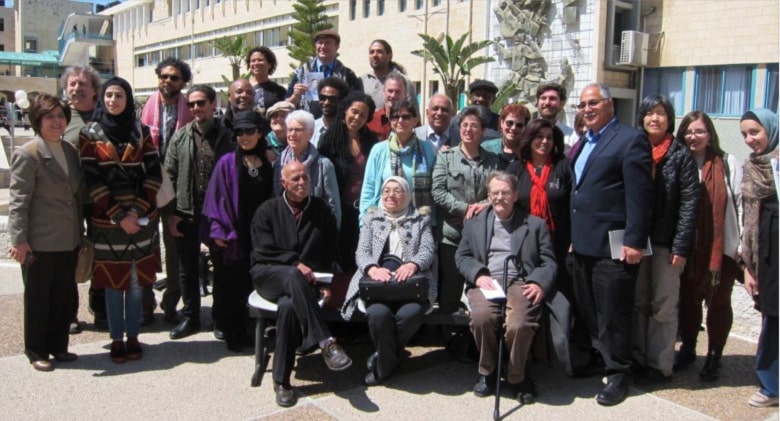 Members of the Delegation
with faculty and students from An-Najah University.

In March 2016, nineteen of us were part of a multi-racial, multi-generational Prisoner, Labor and Academic Solidarity delegation to Palestine convened by Dr. Rabab Abdulhadi, a professor at San Francisco State University.  A highlight of our trip was a conference we participated in at An-Najah University in Nablus in the Palestinian West Bank.  Faculty and students from An-Najah and members of our delegation shared presentations about the marginalized histories of colonial repression, racism and resistance in Palestine and the U.S.  A dynamic discussion ensued, laying the basis for future academic cooperation and public engagement.  For us it was an exciting model of what international academic exchange between activist scholars should be.

The conference at An-Najah was facilitated by a Memorandum of Understanding (MOU) which was established between San Francisco State University and An-Najah in 2014.  The agreement was initiated by Dr. Abdulhadi, who grew up in Nablus, and it grew out of her close ties to both academic institutions.  The purpose of the agreement was to encourage exchange and partnership between the universities and with the Arab and Muslim Ethnicities and Diasporas (AMED) Studies program, an important part of the College of Ethnic Studies at SFSU.

We were very disturbed to learn at the beginning of September that an online petition had been launched by the Middle East Forum, a neo-conservative, pro-Israel group led by Daniel Pipes and David Horowitz, named as leading Islamophobes by the Southern Law Poverty Center, calling on San Francisco State University President, Leslie Wong, to terminate the MOU with An-Najah.  The petition accuses An-Najah of “incitement to violence, anti-Semitism and the glorification of terrorism.”  It cites the opinions of other discredited Zionist organizations such as the Anti-Defamation League (ADL) as sources for these inflammatory allegations.  The vilification of An-Najah, which is consistently ranked as a leading academic institution in the Arab world, is accompanied by an attack on Dr. Abdulhadi who is condemned for initiating the MOU and for her “record as an anti-Israel activist.”  Some of the examples given include her role as a founding member of the US Campaign for the Academic and Cultural Boycott of Israel and her service as faculty advisor for SFSU’s General Union of Palestine Students (GUPS).

Unfortunately, the petition is not an isolated diatribe but part and parcel of an escalating backlash by pro-Israeli, Zionist organizations to undermine support for Palestine which has been gaining momentum on college campuses across the United States over the past ten years, catalyzed by the international Boycott, Divestment and Sanctions (BDS) campaign.  The 2015 report, “The Palestine Exception to Free Speech” by the Center for Constitutional Rights and Palestine Legal explains how pro-Israel groups “leverage their significant resources and lobbying power to pressure universities, government actors, and other institutions to censor or punish advocacy in support of Palestinian rights.”

Multiple forms of pressure have been employed including the creation of an online hit list by the Canary Mission, a Zionist campus watch group explicitly founded to harass and target students and faculty active in the BDS movement.  Dr. Abdulhadi as well as various SFSU GUPS student members are listed on this website in an attempt to derail their academic careers and invite attacks against them.  Another significant pressure point is the spread of McCarthyite anti-BDS legislation which criminalizes businesses, organizations and individuals who participate in boycotts of Israel.  Eleven states have passed such laws and dozens more, including California, are considering them.  In June 2016, New York Governor Andrew Cuomo issued an executive order against boycott and divestment.

At the same time, a recent wave of Israeli raids and arrests in Palestine at the end of July have targeted An-Najah students and students in other Palestinian universities.  Since it is illegal for Palestinian students to organize protests on campuses, and campus political organizations are banned, there is a constant pretext for the Israeli military occupation to arrest students arbitrarily.  The suppression and increasing criminalization of free speech about Palestine on U.S. campuses represent a move in the same direction.

Recently the AMCHA Initiative, another Zionist campus-focused group, launched a campaign to cancel a course, “Palestine: A Settler Colonial Analysis,” at UC Berkeley.  The effort was defeated due to widespread University and public pressure.  A number of our Palestine Delegation members live in the San Francisco Bay Area and we expect SFSU to also uphold its commitment to academic freedom and social justice, values that are prioritized by our communities.

We are encouraged by a statement that SFSU’s associate vice president of strategic communications, J. Elizabeth Smith, made to CBS San Francisco defending the right of SF State faculty to partner with An-Najah.  “The university supports the academic freedom of its faculty.  Partnerships are initiated by faculty members based on their own academic interests, either for their own particular scholarly pursuits or to advance learning opportunities for their students.”  We encourage President Wong to publicly reaffirm this commitment as well.

In the face of the bigoted attacks on the MOU between San Francisco State University and An-Najah University in the Palestine West Bank and on Professor Abdulhadi, a leading Palestinian scholar, we the undersigned Delegation members and other concerned academics, students and community members, call upon President Wong of SFSU to:

Signed by the members of the 2016 Prisoner, Labor and Academic Solidarity Delegation to Palestine:

*All institutional and organizational affiliations are for identification purposes only