There is currently too much dramatic news abroad in the world, mostly bad.  What can an election in one single city mean, far from most fronts?  Yet the voting in Berlin last Sunday (September 18th) was full of drama and meaning, also outside Germany.  The results caused some to grieve, some to applaud, and analysts like soothsayers to turn to arithmetic.

Angela Merkel’s party, the CDU, hitherto junior partner in the Berlin government with the SPD (Social Democrats),took one more painful beating in a growing series, with its lowest results in recent history, a measly 17.6%.  Some of the blame rests on the beefy shoulders of the local party leader, whose campaign in a city full of problems — jobs, rent, fares, education — stressed more cops, the introduction of Tasers, and greater repression generally.  He will now almost certainly have to swap his handsome office as deputy mayor for a chilly opposition seat in the city legislature.  And poor Ms. Merkel had to face his gloomy adherents, eat some crow, and say that her famous “We’ll manage it!” slogan had led to unexpected and difficult consequences.  Indeed, a major cause for the CDU losses lies with the immigrant issue and with those welcoming words of Merkel, among the few decent ones in her entire time in office, which led to last year’s arrival of a million refugees.  Her welcome, however much she now dilutes and alters it, is being used against her by all those in politics or the media, whose constant “straight, factual” accounts of every foreigner’s crime or misdemeanor are overfull of dog-whistle hints to the racists.  Her sister party in big, rich Bavaria (the only such single-state party), fearful of further slipping from its usual majority rule, is foremost in attacking its supposed sibling, always in proper suit-and-tie language but with the old lederhosen-dirndl distrust of outsiders visible underneath.  Merkel is even being forsaken in her own party by further-right forces, and her sinking popularity ratings are already endangering her twin jobs as party leader and chancellor.  She could well grieve at the Berlin results.

But there was no loud rejoicing either at the headquarters of the SPD (Social Democrats), whose Mayor Michael Müller has been cultivating every possible difference with his till-now partners.  They are indeed out, as desired, while he is still in and will remain in his prestigious office.  But alas, although the SPD still stayed ahead of all the others, its results, 21.6% (2011: 28.3%), marked a bigger loss, the biggest in its history.  With this grievous result, and with no two parties able to get the necessary 50% of seats in the legislature, the next ruling government (called the Senate in Berlin) will now require three parties to reach that number.

Aside from the conservative Free Democrats, who now squeeze back into the legislature with 6.7 %, the party which really rejoiced at the results was by far the most dangerous, the Alternative for Germany (AfD), which, in this first electoral try in Berlin, got 14.2 % giving them 25 seats out of 160.  Though well under recent wins in bigger East German states, the number was higher than in Germany’s two other city-states, Hamburg and Bremen, and was a nasty, frightening blow to a city which likes to boast of being open-minded and cosmopolitan.  It was also an omen for the federal elections next year, when it may well get a similar vote.  Indeed, it was an alarm call for the entire world.  Based on hatred of foreigners, with a stress against Muslims, it was its anti-immigrant platform plank that won it most votes, especially from worried, insecure, and increasingly nationalist voters in some areas of East Berlin.  What few of its supporters even noticed, it is also a party backing less taxes for the millionaires, less support for the needy, less equality for women, but more weapons and more aggressiveness outside German borders.  Its rise is part of a wave, almost a tsunami, now engulfing one European country after the other; its ideas are established at the top in Poland, Hungary, and the Baltic countries, are shared by coalition partners in most of Scandinavia, and threaten to win out in Austria, the Netherlands, and France.  It has not yet reached such strength in the strongest of them all, Germany, but it is gaining momentum.

Back in Berlin, it looks as if the SPD will, or almost has to, choose both the Greens and the Linke as government partners, especially after the Linke surprised nearly everyone by gaining votes while others lost, with 15.6 % (2011: 11.7 %), even beating its Green rivals by a few hairs (they got 15.2 %).  All three strongly opposed the AfD, a key point in bringing them together.  There are other points of agreement.  But in all coalitions which the Linke ever joined they diluted their positions so much that they were often undistinguishable from the other parties — and for the voters, who always punished them, sometimes turning to the right — and the AfD.  Will they make too many compromises again this time or will they, though partners, take more aggressive positions and seek support in the population?  It was interesting to note that the Linke party gained most of all in working-class areas of West Berlin, where its members were more militant than in East Berlin, whose often elderly members, holdovers from GDR days, were not too accustomed to demonstrating out in the streets.

These issues also matter on the national scene.  It seems possible that after the elections next September, the SPD may there, too, break its current ties with the CDU — with or without Merkel — and seek the votes of the Greens and the Linke, which could perhaps add up to a majority with new, different scenery.

It would demand compromises from the Linke in such a case, especially the acquiescence to using German troops abroad — even when that clearly furthers German expansionist policies.  The Linke has hitherto said it will not agree to such a compromise and will for its part make demands.  One of them is the rejection of the trade deals with the USA — known as TTIP, and the equivalent deal with Canada, called CETA.  Both are favorable only to big business, especially the ever smaller group of ever greater monopolies already dominating the world.

The head of the SPD, Sigmar Gabriel, formerly favored both treaties, like Merkel.  Under great pressure from huge numbers of Germans he qualified his support for TTIP (or at least seemed to — much like a political candidate in the USA).  But a CETA decision is due this year, and Gabriel insisted on approving it.  Last Saturday, one day before the Berlin vote, there were demonstrations against CETA and TTIP in seven major cities, supported by many organizations on the left, ecological groups, and, most important, at least the two biggest unions, IG Metall and Ver.di (with workers mostly in city and state jobs).  It was a wonderful protest.  I took part in Berlin, with about 70,000 others, starting off on the street in front of my house and marching off — all highly-motivated, determined — and happy that the pouring rain at the start quickly ceased.  The similar marches in the other cities were not quite so big as in Berlin, of course, but all big for their cities — and adding up to over 300,000!  Even the police estimated close to 200,000!

On Monday SPD leaders met in secret session to decide on their party’s position toward CETA.  Many grassroots groups and initiatives, even the affiliated Young Socialists, all demanded a No to CETA.  Gabriel’s reputation and future status were on the line.  And he won.  The influence of big business was stronger than that of even the biggest unions and the hundreds of thousands who demonstrated.  He promised a few changes in CETA, compromises to overcome opposition, and in the end his prayers were answered — he got the desired Yes vote.

A question remains — not unrelated to similar questions elsewhere in the world: Could one agree to join a government headed by a man like Gabriel, with all that stood behind him?  The question is not quite so easy to decide in light of the nearly-fascist danger of the AfD.  But it is certainly a question that will dominate German politics in the coming year and have unforeseeable results. 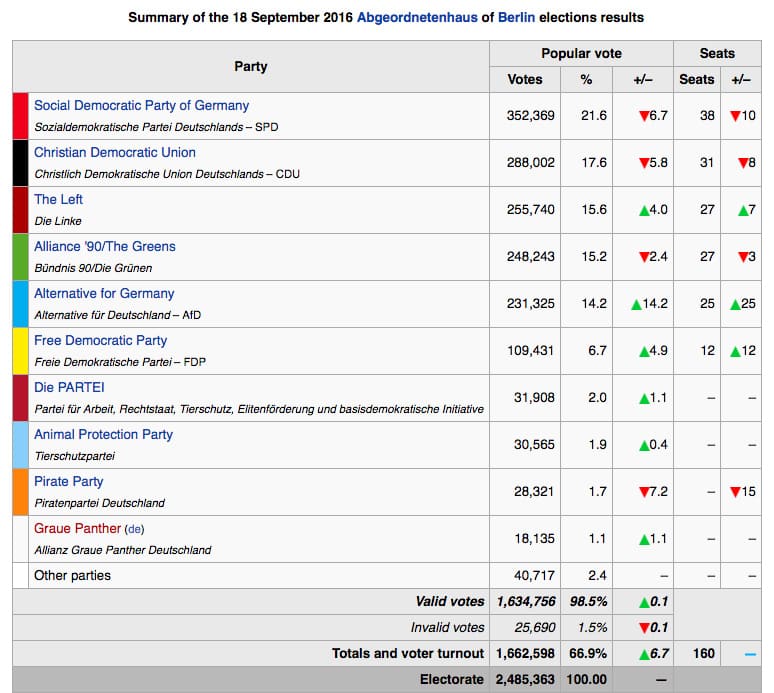