I write to express outrage at your government’s response to the destruction levelled by Israel on the innocent civilians in Gaza and Lebanon.

The world has rightly condemned the killings and kidnapping of Israeli soldiers, however Israel’s response has been illegal, brutal and disproportionate.

It is more apparent than ever that your government’s desire to appease George Bush is so all-consuming, that you are prepared to turn a blind eye to the massive destruction in Gaza and in Lebanon, going so far as to deem these Israeli government assaults as ‘measured’.

Even George Bush has been compelled to bow to international pressure and caution Israel to “limit as much as possible so-called collateral damage not only to facilities but also to human lives.”

Israel, Hamas and Hezbollah must all assume responsibility for their actions. However, it is impossible to ignore Israel’s disproportionate response:

Canadians expect their government to reflect our strongly held values of fairness, and justice and to uphold our obligations to international law.  They also expect their government to defend and protect their citizens overseas.  Your inability to reach out to the families in Canada whose relatives are trapped in Lebanon, or to put in place any evacuation plan to bring those citizens home, is irresponsible and unacceptable.

I urge you to set in motion an immediate plan to bring Canadian citizens home, to call on Israel to halt its assault on Lebanon and to negotiate in good faith a resolution to this latest crisis which has already cost too many innocent lives. 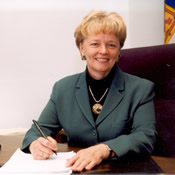 Born in Ottawa, Ontario in 1944, Alexa McDonough is a proud mother of grown sons, Justin, 33 and Travis, 31, and is the grandmother of Abbie Jean, Lauchlan and Taylor McDonough.  Alexa McDonough graduated with a Bachelor of Arts in Sociology and Psychology in 1965 and completed her Masters in Social Work in 1967.  She worked as a social worker and social policy researcher, developed and taught a graduate program in social policy, social administration and community development, and was even a reporter before becoming Leader of the Nova Scotia New Democratic Party in 1980, Canada’s first woman elected to lead a major party in a provincial legislature.  In 1997, Alexa McDonough became the first New Democrat elected to Parliament from the mainland of Nova Scotia.  In 2006, Alexa McDonough became the first woman to win four consecutive federal terms in Nova Scotia.

Alexa McDonough’s activism started at the age of fourteen, initiating through her church youth group, an outreach and day camp program to children and families of African Canadian families who were struggling with racial barriers and exclusion in her own province of Nova Scotia.  Throughout her adult life she has supported and participated in dozens of advocacy and social action groups, human rights organizations, and professional associations.  She has also received numerous awards for her peace advocacy work, her contributions to the Arab-Canadian community, and the 2003 Results Canada Political Leadership Award “in recognition of her outstanding leadership in the fight against global poverty and disease.”

This letter was made available at Peace, Earth, & Justice News.