Israel’s military offensives in Gaza and Lebanon have reenergized the neoconservatives, who see an opportunity to regain influence lost as a result of setbacks in Iraq.  While insisting on unconditional U.S. support for Israel, the neoconservatives are also pushing for possible U.S. attacks on Tehran’s nuclear facilities in retaliation for its support of Hezbollah.

In a recent Weekly Standard column entitled “It’s Our War,” editor William Kristol called Iran “the prime mover behind the terrorist groups who have started this war, ” which, he argued, should be considered part of “the global struggle against radical Islamism” (July 24, 2006 issue).

He complained that Washington recently has done a “poor job of standing up and weakening Syria and Iran” and called on President George W. Bush to fly directly from the “silly [Group of Eight] summit in St. Petersburg . . . to Jerusalem, the capital of a nation that stands with us, and is willing to fight with us, against our common enemies.”

“This is our war, too,” declared Kristol, who is also a founder and co-chairman of the recently lapsed Project for the New American Century (PNAC).

“All of us in the free world owe Israel an enormous thank-you for defending freedom, democracy, and security against the Iranian cat’s-paw wholly-owned terrorist subsidiaries Hezbollah and Hamas,” echoed Larry Kudlow, a neoconservative commentator at the National Review, the Standard’s right-wing competitor (“Israel’s Moment: The Free World’s Gain,” July 17, 2006).

“They are defending their own homeland and very existence, but they are also defending America’s homeland as our frontline democratic ally in the Middle East,” said Kudlow about Israel.  Like Kristol and other polemicists, Kudlow also named Syria (“which is also directed by Iran”) as a promising future target as the conflict expands.

The two columns are the latest examples of a slew of commentaries appearing in U.S. print and broadcast media since Israel began bombing targets in Lebanon in retaliation for Hezbollah’s fatal cross-border attack on July 12, 2006.  The opinions appear to be part of a deliberate campaign by neoconservatives and some of their right-wing supporters to depict the current conflict as part of global struggle pitting Israel, billed as the forward base of Western civilization, against Islamist extremism, purportedly organized and directed by Iran and its junior partner, Syria.

This view was perhaps most melodramatically expressed by former speaker of the House, Republican Newt Gingrich, in an appearance on NBC’s Meet the Press when he described the conflict as “the early stages of . . . the third World War” (July 16, 2006).

The effort to frame the current round of violence as part of a much larger struggle — and the highlighting of Israel’s recurring role as Washington’s most loyal frontline ally — recalls the neoconservatives’ early reaction to the September 11, 2001 terrorist attacks.

Just nine days after 9/11, Kristol and PNAC — whose charter members included Vice President Dick Cheney, Secretary of Defense Donald Rumsfeld, and half a dozen other senior Bush administration officials — released an open letter to Bush that called for the United States to retaliate not only against al-Qaida and Afghanistan, but also against Israel’s main regional foes, beginning with Iraqi President Saddam Hussein and Palestine Liberation Organization Chairman Yasser Arafat.

In addition, the letter advised, “Any war against terrorism must target Hezbollah.  We believe that the administration should demand that Iran and Syria immediately cease all military, financial, and political support for Hezbollah and its operations.  Should Iran and Syria refuse to comply, the administration should consider appropriate measures of retaliation against these state sponsors of terrorism.”

“Israel has been and remains America’s staunchest ally against international terrorism, especially in the Middle East,” the letter asserted.  “The United States should fully support our fellow democracy in its fight against terrorism.”

While the Iraqi and Palestinian components of PNAC’s agenda were soon adopted as policy and essentially achieved, neoconservative hopes that Bush would move on Hezbollah — as well as Syria and Iran — eventually stalled as U.S. military forces became bogged down in an increasingly bloody and costly counterinsurgency war in Iraq.

As the situation in Iraq worsened, neoconservative influence in and on the administration also declined, to the benefit of “realists” based primarily in the State Department.  These “realists” favored a less aggressive policy designed to secure Damascus and Tehran’s cooperation in stabilizing Iraq and to strengthen the elected Lebanese government, of which Hezbollah is part.

In that context, the current conflict represents a golden opportunity for the neoconservatives to reassert their influence and to reactivate their Israel-centered agenda against Hezbollah and its two state sponsors. 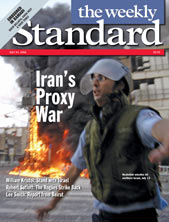 The cover of the July 24, 2006 Standard blazes “Iran’s Proxy War,” and the issue featured no fewer than four articles stressing Iran’s sponsorship of Hezbollah and Hamas and the belief that the United States must stand with Israel, if not take independent action against Tehran and/or Damascus, as Kristol recommended.

The new campaign’s prime targets are the more conciliatory “realist” policies toward Syria and Iran pursued by the State Department, which the neoconservatives argue have backfired by making Washington look weak.

“They are now testing us more boldly than one would have thought possible a few years ago,” wrote Kristol.  “Weakness is provocative.  We have been too weak, and have allowed ourselves to be perceived as weak,” he went on, adding that, “The right response is renewed strength,” notably “in pursuing regime change in Syria and Iran [and] consider[ing] countering this act of Iranian aggression with a military strike against Iranian nuclear facilities.”

The notion that U.S. Middle East policy has become far too flaccid and accommodating is echoed by a number of other neoconservatives, particularly Michael Rubin, a prolific analyst at the hardline American Enterprise Institute (AEI), and Richard Perle, a Cheney protégé and former Defense Policy Board chairman.  In another July 24 Standard article, Rubin qualified recent State Department policy as “all talk and no strategy” that had emboldened enemies, especially Iran, to challenge Washington and its allies.

In another article for the National Review, bluntly titled “Eradication First,” Rubin elaborated on that theme, arguing diplomacy in the current crisis will only be successful “if it commences both after the eradication of Hezbollah and Hamas, and after their paymasters pay a terrible cost for their support” (July 17, 2006).

“If . . .  peace is the aim, it is imperative to punish the Syrian and Iranian leadership,” he wrote.

Above all, according to the neoconservatives, the U.S. position in the region is now inextricably tied to the success or failure of Israel’s military campaign.

In another Standard article, titled “The Rogues Strike Back: Iran, Syria, Hamas, and Hezbollah vs. Israel,” Robert Satloff, executive director of the hawkish, pro-Israel Washington Institute for Near East Policy, argued that “defeat for Israel — either on the battlefield or via coerced compromises to achieve flawed ceasefires — is a defeat for U.S. interests; it will inspire radicals of every stripe, release Iran and Syria to spread more mayhem inside Iraq, and make more likely our own eventual confrontation with this emboldened alliance of extremists” (July 24, 2006).