At a press conference today, journalist Akbar Ganji had just finished vilifying the “intolerant culture” of non-Europeans when he failed to intervene against Western censorship happening right before his eyes.  He is touring the United States to, in his words, raise awareness about government abuses in Iran, including his six-year imprisonment that ended last March.  The other constant theme of his campaign has been the glorification of Western “achievements.”  For his “courage,” he has received numerous press freedom awards from European, Canadian, and American intellectual and media associations.

Ganji was the attraction at the posh Washington office of Amnesty International today, where several awe-struck staffers joined a dozen admiring reporters and Iranian backers of Ganji around a conference table.  No sooner had I placed copies of this open letter addressed to him on the table at the conclusion of the press conference than the same were snatched up by an AI enforcer, who told me I needed prior permission to have my freedom of expression.  Apparently the AI careerist was alarmed by doubts I had raised earlier in the session about Ganji’s tour.  After all, if inconsistencies in the stories told in Amnesty’s fundraising were to become public, could budget cuts and staff layoffs be far behind?

The staffer began to show me (registered as a reporter) the door but relented when I informed him that I was an AI member.  I reminded him that, if expressing diverse opinions at AI required official approval, we should not be criticizing Iran’s theocracy for censorship.  But he would not let the reporters see my letter.

Ganji looked on but chose not to ask me for a copy of the letter or ask his AI hosts to respect my freedom of expression.  Presumably, human rights are so safe in a Western “democracy” that he did not trust his eyes as he witnessed AI’s censorship!  When he returns to Iran, of course he will tell tall tales of total press freedom in America.  But he will not mention that no reporter at today’s press conference defended my unorthodox take on Ganji.  His Iranian cohorts will no doubt agree that the consensus of corporate careerists is “democracy.”

Ganji has risen to mythic stature in the eyes of elitist Iranian “pro-democracy” activists and Western seekers of “moderate Muslims” because six years in an Iranian prison have not dimmed his enthusiasm for neo-liberal policies.  Associated Press quoted him the other day as advocating the privatization of Middle East’s oil resources: “Ganji said that, until oil revenues are wrested from state hands, there will be virtually no democratic nations in the Middle East.”

In other words, the “human rights activist” dreams of a day when the nationalization of Iranian oil, for which Prime Minister Mohammad Mosaddegh was overthrown in 1953 by the CIA, can be reversed.  If Ganji’s recommended path to “democracy” sounds familiar, that is because it is identical to the American plan for Iraqi oil, first revealed during the tenure of Paul Bremmer.  For reasons like this, Ganji has drawn little sympathy in Iran outside the struggling reformist (anti-populist) movement.  He must therefore appeal to what he calls the West’s “civil society” (read: shadow government) and Iranians living abroad for help.

This should not come as a surprise because, like the ultra-right former British Prime Minister Margaret Thatcher and her guru Friedrich von Hayek, Ganji extols Karl Popper’s elitist philosophy of freedom throughout his writings, little of which have been translated from Farsi.  Thatcher and Hayek supported Chile’s mass murderer, General Augusto Pinochet, because he restored market “freedom” in his country with the help of CIA.

Ganji is not the first Iranian opposition activist who thinks like Margaret Thatcher and yet declares, when he is cornered, that he admires social democracy!  But he is the one most embraced by Western libertarian circles.  Rumor has it that Noam Chomsky, who last year added his name to a petition demanding Ganji’s release from prison, has agreed to meet with him.  If true, that should be an interesting meeting, because Ganji has consistently called for deregulation and the shrinking of government in Iran, as did Chomsky’s nemesis, the late President Ronald Reagan. 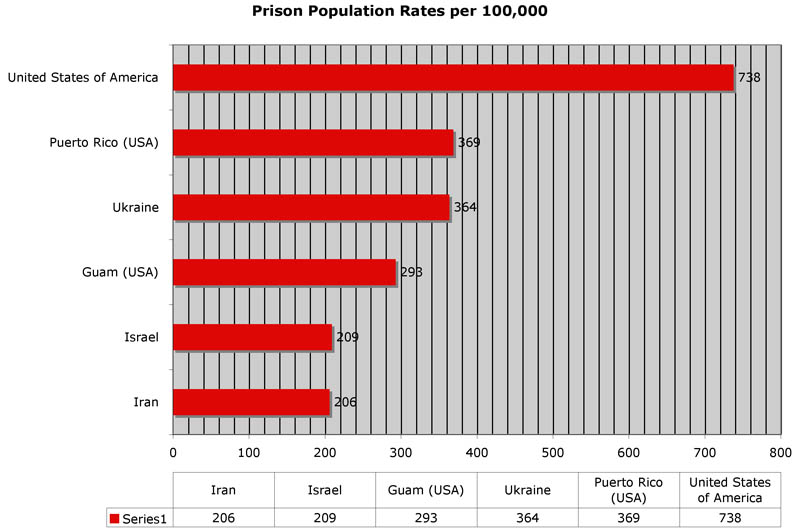 SOURCE: The International Centre for Prison Studies, “Entire World — Prison Population Rates per 100,000 of the National Population,” Accessed on 19 July 2006
Download the chart and data as an Excel file.

America’s Own Political Prisoners Rot While You Grab the Spotlight, Akbar Ganji

As family members and friends of a few of America’s political prisoners, we are alarmed that you have brought your campaign for prisoner rights in Iran to our country.  You revive the legacy of pitiful Soviet defectors used by the Washington elite to justify wasting our nation’s budget on subsidies for “defense” contractors.  The attention showered on you and other worshippers of so-called Western “freedom” keeps America’s own dissidents cast as unpatriotic at the margins of public debate.

In the books and numerous articles you have authored, you have made clear your fascination with member countries of the NATO military pact.  You have also spoken with admiration of Western meddling in Ukraine, the so-called “Orange Revolution.”

President Bush appreciates your support, as he desperately needs to divert attention from America’s kidnap and torture of resisters here and abroad.  In a White House statement aimed at the government of Iran last year, he declared that “America stands with you,” Mr. Ganji.  Former Israeli cabinet minister, Natan Sharansky, who campaigns nonstop for the confiscation of Palestinian land by Jewish settlers, joined President Bush to demand your release from prison in Iran.

You have called for regime change in Iran and hope your publicity in New York and Washington will help democratic aspirations in your country.  But theatrics like your “hunger strike” at the UN is drawing attention away from a 465-page condemnation of the US government conduct sent to the UN by a coalition of leading human rights organizations (see www.ushrnetwork.org).

We have thousands of political prisoners in the United States who are ignored by our media.  Unlike you, they do not have wealthy benefactors to fly them around the country and the globe.  With 2.2 million prisoners, America is certified as having the world’s highest rate of incarceration.  We would like you to help us while you are in the spotlight by discussing police brutality and prisoner torture in our country, too.  After all, as you have said “No one is free until all are free.”  Iranians have as much right to interfere in the internal affairs of the United States as vice versa, even if the almighty West were “the cradle of civilization,” as you told the Voice of America in a recent interview.

Your campaign makes clear that you believe only the world’s most dangerous (in your words, “advanced”) countries deserve national sovereignty.  This is why you are here asking the West for “moral support” against your government.  We remind you that similar pleas by Kosovo “dissidents” preceded 78 days of intense bombing of Yugoslavia by NATO.  An example of such expansive “humanism” is Reporters Without Borders, which hosted you last week with great fanfare in Paris.  The organization relies on funding from an American government entity called the National Endowment for Democracy, whose largesse has supported a number of disgruntled Iranian “intellectuals.”

We wish the outspoken American journalist, Mumia Abu Jamal, could get attention from Reporters Without Borders like you do, Mr. Ganji.  He has been on death row in Pennsylvania for 23 years on fabricated charges because he speaks truth to power IN THIS COUNTRY.  But Reporters Without Borders specializes in embarrassing governments targeted with orange and purple revolutions only, where NED spends millions to incite “pro-democracy activists” like you.

If you have come here to stand with America’s power elite — our people’s jailers — our message to you is “Ganji Go Home!”