In the India Resource Center’s latest press release (“Kerala Throws Out Coca-Cola and Pepsi: Seven Other States Impose Ban, Others Expected to Follow,” 9 August 2006), reporting that the southern state of Kerala in India has just banned Coca Cola on account of the reckless way in which Coca Cola sells products contaminated with pesticide in India, the following paragraph in particular caught my eye:

Last week, the Centre for Science and Environment (CSE), a leading public interest research and advocacy group in India, released a study that found a “cocktail of between three to five different pesticides in all samples” of Coca-Cola and Pepsi products they tested in India. On an average, the CSE study said, the pesticide residues were 24 times higher than European Union (EU) standards and those proposed by the Bureau of India Standards (BIS). (emphasis added)

Since the idea of “proportionality” is very much  in the news these days, thanks to Israel’s Lebanon War, that Coca Cola blithely sells drinks in India with pesticide residues 24 times higher than European Union standards inevitably leads us to some reflections on “proportionality.”  And, while we are at it, also on the number “24”!

Could it be, I wonder, that we Indians are (proportionately) 24 times more resistant to pesticides than are Europeans and Americans?  Maybe Coca Cola knows this, and that’s why their decision to sell these contaminated drinks was actually an ethical one, contrary to what liberal do-gooder student protestors at US universities would have you believe?

It is for similar reasons, perhaps, that Israel can ethically drop 24 times (or 240 times, or 2,400 times, as the case many be)  more lethal bombs on Lebanon, with the US government happy to let it go on?  Once again, the do-gooder liberal students at US universities are idiotically protesting against the bombing, with cries of “Disproportionate Use of Force!”  They are completely misguided, of course.

If Coca Cola believes that the bodies of Indians can take in 24 times more pesticides than the bodies of Europeans or Americans, then what is more natural than to assume that countries full of little brown people from the Third World can take 24 times more bombing than could be visited upon Western nations before it is deemed unacceptable?   There is, after all, a good precedent: Tony Edmonds, professor of history at Ball State University in Muncie, Indiana, and author of the book The War in Vietnam, observed: “More bombs were dropped by American planes in the [single] Quang Tri province in Vietnam than in the whole of Europe in World War II.”

And, of course, we could also conclude  that mothers of little brown people in the Third World love their children 24 times less than mothers in the First World!  So even if Coca Cola merrily tolerates having 24 times more pesticides in its products in India than in its products in Europe or the USA, not to worry!  There is nothing “disproportionate” about it!  The math all works out in the end!  It’s not the number of dead kids that matter — no, not at all — it’s the math, stupid!

Needless to say, it is also for the same reasons of proportionality that Coca Cola is entitled to 24 times more due process, when US universities consider whether to renew contracts with it, than the due process that foreign nationals (again, usually from countries populated by little brown people) accused of participating in a campaign of “terror” are entitled to, even though the alleged crimes in both cases are dangerous to human lives!

How many times must a man look up

Before he can see the sky?

How many ears must one man have

Before he can hear people cry?

How many deaths will it take till he knows,

That too many people have died?

Dylan only tells us that the answer is blowing in the wind.

In one of the volumes of  Douglas Adams’ The Hitchhiker’s Guide to the Galaxy, 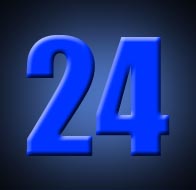 Well, I’m thinking today: maybe the robot got the answer wrong.  Maybe the answer is: “Twenty-four” !

Sayan Bhattacharyya was born and raised in Calcutta (Kolkata), India, and is associated with the Progressive South Asians Exchange (proXsa).