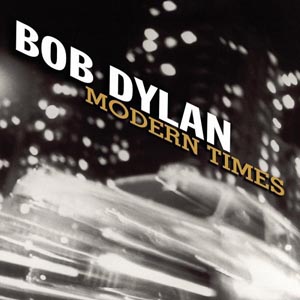 I took my Harry Choates CD off the player even though that Cajun violin he plays had a lot to say a year after Katrina hit.  The new Bob Dylan album was in my hand and it was time to put the little disc on.  Modern Times is what he’s calling it.  The cover has one of those time-lapse photographs with the car lights a blurry line.  In fact, the whole freakin’ car is a blurry collection of lines.  Other than that, it’s kind of plain.  Picture of Bob on the back.  The song titles and a production credit belonging to Jack Frost — just another one of Dylan’s characters from the man called Alias in the film Pat Garret and Billy the Kid.  The man born under the sign of Gemini, the sons of Leda and that swan.  One who dies and is reborn on the condition that one lives in night and the other in day.  The shadows of the underworld and the ecstasy of the heavens.

Put it on.  Thunderous guitar licks open the song “Thunder on the Mountain.”  The music surpasses the lyrics at times.  Mellow blues grooves slashed in two by sterling toned electric guitar.  The opener “Thunder on the Mountain” and the finale “Ain’t Talkin'” represent the lyrical highlights of this recording.  In between lie a number of new and reworked blues tunes, a rocker or two and even a Forties crooner piece, all enhanced by Dylan’s lyrical cleverness.

Owlman Watching from the Press Box

As part of my purchase package, I received a one-hour sample of the radio show that Dylan is currently deejaying on XM Radio.  Fortunately for me, the theme of the show is baseball.  Dylan the deejay playing the role of the play-by-play and color commentator roiled into one.  To borrow Marianne Moore‘s phrase from her poem “Baseball and Writing,” Bob’s the owlman in the press box.  Mel Allen and Gurt Gowdy, Joe Buck, Harry Karry, Joe Morgan, Jerry Remy, even Tim McCarver to the tune of America’s jukebox.  The disc is worth it just for the sound of Dylan singing “Take Me Out to the Ballgame.”

Anyhow, strike three.  Back to the disc in question.  There’s a song here called “Workingman’s Blues #2,” which seems to be a nod to Merle Haggard’s song of a similar name.  Like everything else on this disc (and on every disc since his 1962 “Freewheelin'”), the song is not overtly political in the sense politicos think of politics.  You know, left/right, either/or or compromise, and so on.  No, he mentions the proletariat by name in the first line or two, but lyrics are more of a lament for the days when the classic US union tool-and-die man could make a real living from his work instead of wondering where and when it all went to hell.  The music is gentle — even lilting — but it’s not comforting.   Hell, they  burned his barn and took his horse.  He’s black and blue, but this song he’s singing is to a former lover who he hopes can make that all go away.  Haggard found his solace in the barroom and Dylan hopes to find his in love.  Like Haggard’s workingman, Dylan’s is gonna make the best of a bad situation, cajoling his lover and comrades to “Meet (him) at the bottom,” since that’s where global capitalism is putting him, to hang back or fight, all the while singing those workingman blues.  As the song ends, a sad fiddle plays. . . .

It’s a collection full of memories of things that could have been or might yet come.  Yet, there is no lasting sadness.  Even though the “world has gone berserk,” it’s time to travel the world.  The man won’t lie down to accept his fate.  Or get kicked around.  It’s been a while since Dylan held out much hope for human salvation through politics or religion.  For those expecting either, they won’t find it here.  It’s okay to believe, he seems to be saying, but trust only yourself.  If there was a message in the recent Dylan film Masked and Anonymous, it was the same as the one I hear now on Modern Times.

There are old blues numbers here slightly reworked.  “Rollin’ and Tumblin'” not only borrows the title of this tune attributed to Hambone Willie, it takes the essential riffs and turns them into serious guitar lickin’.  The last time I heard these leads live was at a concert by the Grateful Dead in what turned out to be one of their last shows under that name.  Their take was a lazy, hot-summer-afternoon-after-a-couple-of-beers sound.  Garcia spinning out a slow lick here and there while Weir pushed the rhythm section through the humid sounds of the lead.  Dylan and his band do something a little different.  It’s not as heavy as the version made famous by Muddy Waters, but it shares the tempo.  Denny Freeman’s lead guitar has a clarity that cuts through the gravel in Dylan’s throat.  Like many a blues song, it’s the woman who’s at fault here, but only in the mind of the singer.  Thinking deeper, Dylan acknowledges that the real blame here lies in the doom and gloom of these modern times.  Indeed, once the blame is given, the singer takes it back by asking for a mutual forgiveness, since it’s really the times that are at fault.

The song that fascinates me the most is the last one to come on the player.  Titled “Ain’t Talkin’,” it is anything but that.  A paean to the mother earth and a song to a woman the singer left behind, this lengthy chanson is a mixture of hope and weeping for the state of humanity and the planet us folks inhabit.  “Still burnin (yet) still yearnin,” there’s no intention of defeat inside this journey, even though we may be on the “last outback at the world’s end.”  This man, this mystic, this old crank with a clever sense of irony and wit to boot, points out the never-ending injury to this mother earth and even points out who should take a good deal of the blame: the rich and powerful, those same masters of war that he called out so many moons ago when he was young and had almost boundless hope.  It’s desperate for a lot of us; the line from Dylan’s version of “When the Levee Breaks” — “Some people barely got enough skin to cover their bones” — says that as clear as a freakin’ bell.  There’s doom here, just like there is throughout this album and much of Dylan’s work.  “Thunder on the Mountain” is more than just a noise after all.  In the hills where I live, it often means heavy rains and flash floods.  Disasters great and small.  Bridges washed out and cattle pulled downstream.  People moving into their neighbor’s home while the homestead gets rebuilt.

Back to Marianne Moore’s line about the owlmen in the press box.  Bob Dylan has often been one of those owlmen.  Like a sportswriter, he tells the story of the game as he sees it, yet painted with prejudices derived from his participation in it.  The game he’s calling, though, is the game of life.  As anyone who has ever listened to or watched a hometown sports broadcast knows, objectivity on the part of the announcers is not even a pretense.  The announcer, the writer, the commentator all want the home team to win just like the visitor’s press box wants their team to succeed.  The owlman Bob Dylan is like the best of those sports announcers.  When he calls the game of life, you know that he’s doing more than just watching.  He’s in there just like the rest of us.  He cares what happens.  His ability lies in his skill to not only call the game as he sees and feels it, but to call it in a way that puts it in a perspective the rest of us relate to.  It ain’t always pretty and we often lose.  But at least we play.  And so does Dylan.