The recent election win of an incumbent and centrist GOP governor in California over his Democratic rival by double digits might suggest that the political status quo is alive and well.   Is this gubernatorial landslide a triumph of centrism in the face of left and right extremism?  Have California voters spoken and returned to their market-friendly roles as tame workers and faithful consumers?  Such views might be off the mark. 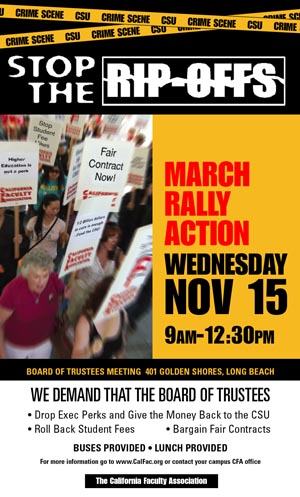 Consider the coalition actions of union professors and students in the California State University system.  An estimated 1,500 of them rallied at the system’s board of trustees meeting in Long Beach on November 15.  Two dozen of these protesters locked arms in a sit-down action in front of the trustees, bringing to mind the black freedom movement’s fight to end racial segregation in the 1960s.

What is happening that propelled CSU professors and students to demonstrate this way?  Part of the answer is their discontent with rising class size (50 students and up) and student fees, plus six-figure senior management pay that continues after these managers have left the system (also called “golden parachutes”).

In Long Beach, the CSU trustees approved a budget for 2007-2008 for the governor to sign in January, one that expects enough state tax dollars to prevent student fee increases.  However, the state Legislature’s top budget analyst has said in a recent press conference that declining home prices and sales could drain dollars from California’s tax base in the next fiscal year.  Thus, CSU students could see their fees rise to bridge this gap between tax revenue and spending.  CSU students have seen their fees jump by an average of 15 percent annually over the past five years, reports the San Francisco Chronicle of November 17.

The main flashpoint of the Long Beach protest was deadlocked labor-management contract talks.  The California Faculty Association and the CSU system have been negotiating a new contract for the past 19 months.  Currently, CFA members are working under a contract extension that ends on November 30.  With their working-class CSU students in mind, the CFA, which represents professors, plus coaches, counselors and librarians, seeks higher pay and smaller class size.  The CFA says that such a move would make professors’ workloads more manageable and thereby improve the quality of education for the 400,000-plus students in the 23-campus CSU system.

The CSU has offered the CFA a 24.87 percent pay raise over four years.  The CSU offer actually converts to a 14.87 percent increase, according to the CFA.  Contractual contingencies account for the variance in the two sides’ math.

According to the CFA, members would have to use a part of their future raises to buy the rest of their raises, calculated by years of work.  By contrast, other state workers get raises with no such buy-back terms.

Another contingency is management’s desire to implement merit pay for professors, who would compete against each other for salary hikes.  Senior management on the 23 CSU campuses would decide whether faculty performance in the classroom merited salary increases.

In an early November meeting with faculty, Alexander Gonzalez, the president at CSU Sacramento, proposed to balance the school’s operating budget by cutting classes and making them available to students on iPod downloads.  By way of data to back his case, Gonzalez showed faculty a pie chart, but no line-item budget numbers, said an assistant professor of women’s studies who was present.

Then on November 17, Gonzalez reversed his proposal for budget-balancing on the backs of professors and students.  He opted instead to use emergency reserve funds for any shortfalls in the school’s operating budget.  Members of the school faculty had been pressuring him to change his initial budget plan.

It is worth noting that five CSU campuses are now offering classroom lectures and other academic content to students via iPods, thanks to Apple’s iTunes U hosting service, the Sacramento Bee of November 16 reports.  One outcome of digitizing higher education is a drop off in students’ personal communication with their professors.  In this way, online higher education is a corporate “solution” to CSU’s classroom overcrowding.  But can Apple Computer’s gain replace the loss in facial and verbal cues that make human communication unique?

The state Public Employment Relations Board declared an impasse in contract negotiations between the CFA and CSU early this month.  Mediation talks with a PERB appointed mediator began on November 8.  Much hangs in the balance for current and future generations.  The mobilization of union professors and students in California is a response to that.

Seth Sandronsky is a member of Sacramento Area Peace Action and a co-editor of Because People Matter, Sacramento’s progressive paper www.bpmnews.org/.  He can be reached at: bpmnews@nicetechnology.com.