It’s a new political moment for the antiwar movement.

Washington’s failure in Iraq is undeniable: even Henry Kissinger says a U.S. victory is impossible.  The Iraq war was the prime reason the U.S. electorate delivered a huge “thumping” to George Bush on November 7.  The administration is openly flailing about for any possible “Plan B” (or C, or D, or E) to avert total humiliation in Iraq.  There are signs that the elite guardians of U.S. imperial interests recognize that a more general foreign policy readjustment is being forced upon them. 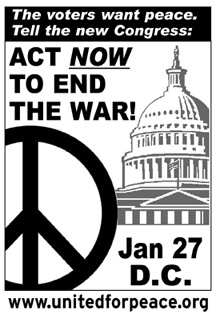 In such a fluid situation grassroots pressure can make a tremendous difference.  Conditions are ripe to beat back the administration’s desperate and dangerous notions about “One Last Big Push” in Iraq.  The antiwar movement can seize the moment with a Big Push of our own, with the January 27-29 mass actions called by United for Peace and Justice as the immediate focal point.  (Go to www.unitedforpeace.org for details.)

The New York Times acknowledged Nov. 23 that Iraq is “a society in collapse.”  An official U.N. report said that more Iraqi civilians — 3,709 — were killed in October than any other month since the U.S. invasion.  Open sectarian warfare between Sunni insurgents and Shiite militias rages in the streets of Baghdad.

After the worst single day of violence yet (Nov. 23), major Shiite parties threatened to withdraw from the government if Prime Minister Nuri Kamal al-Maliki meets with George Bush.  Iraq’s National Unity Government (which already governs nothing beyond Baghdad’s U.S.-fortified “Green Zone”) is in danger of total disintegration.

Attacks on U.S. military forces are at record levels.  Sixty percent of Iraqis endorse such attacks and 80% support a timetable for U.S. withdrawal.  Even amid fears of all-out civil war, most Iraqis — along with most of the world — target the root cause and driving force of the country’s violence as the U.S. occupation.

On November 7, U.S. voters joined the rest of the world in repudiating Bush’s Iraq adventure.

The Republicans employed every fear-mongering weapon honed since 9/11.  They warned that “a vote for the Democrats is a vote for the terrorists.”  They worked overtime on racist voter-suppression efforts in Black and Latino communities.  They spent tens of millions to fan anti-immigrant and anti-gay prejudice, and even sunk to running an ad pushing the “Black-men-want-white-women” theme.

Not long ago Karl Rove was proclaiming that such methods would ensure Republican rule “for a generation.”  But this time the emperor’s clothes were full of holes.  Anger over Bush’s failures after Katrina and over a string of Republican scandals — and above all over Iraq — found expression at the ballot box.  Republican support slipped in almost every constituency and the G.O.P. lost control of both the House and the Senate.  Among the more noteworthy features of the election were (1) a substantial shift (between 10 and 20% nationally) of Latino voters from the Republican to the Democratic column; (2) a similar-scale shift of voters with less than a high school education; and (3) voters under 30 years old opposing the Republicans by a larger margin than any other age group.

The results marked a break from the nightmare years when terrorist-baiting was sufficient to keep a majority lined up behind a far right agenda.  Getting over this hurdle was an indispensable step in what remains a long, uphill fight for a peace and justice agenda.

The bitter internal conflicts that have broken out within Republican ranks are a significant plus.  Morale in virtually every progressive movement received a huge boost.

At same time, there are severe limits to what the elections did (or could) achieve.  Voter rejection of the Republicans took place through the only mass channel available — voting for Democrats.  Some of these are strongly antiwar.  But the majority (and the top leadership) is committed (or hostage) to a worldview that puts more value on U.S. supremacy than on peace.  This means the Democratic mainstream is likely to act in contradictory ways as it assumes congressional power.  Its partisan interests will yield a series of hearings and inquiries spotlighting the horrors Bush visited upon Iraq as well as White House-authorized torture, spying, war profiteering, manipulation of intelligence, and so on.  Yet top Democrats’ commitment to empire will simultaneously push them toward compromise with a newly “realistic” White House in some kind of bipartisan strategy attempting to sustain the occupation and undermine protest movements.

The push by both Republican and Democratic “realists” for a “Plan B” in Iraq was underway before the midterm elections.  The replacement of Defense Secretary Donald Rumsfeld by elite heavyweight Robert Gates has moved that effort center-stage.

The key institution in the “Plan B” scramble is the bipartisan Iraq Study Group led by top Bush family operative James Baker and Democratic power-player Lee Hamilton.  Baker is the key figure: a power in U.S. administrations going back decades, he is being counted on to line up the remaining administration neocons, their President-in-denial, and Hilary-style Democrats behind a “new course” that can rescue Washington’s interests.

The Baker-Hamilton recommendations will be released in early December.  Trial balloons already floated are all over the map: Hold serious talks with Iran and Syria?  Change the approach to training the Iraqi army and police force?  Pull U.S. troops back to a few major military bases?  “Temporarily” send more troops make “one last big push” for victory?

The problem on Baker’s hands is that none of these options can get Washington what it wants.  Realities on the ground have spun beyond U.S. control.  The only thing the U.S. can do which could allow Iraqis a chance for a safer and better life is admit its invasion was wrong, get out completely, and pay for Iraqi-led reconstruction efforts.  This is the very thing Baker-Hamilton and Company are tasked to avoid.

When the Baker-Hamilton recommendations are made, there will be an all-out effort to build a bipartisan consensus for an Iraq policy readjustment.  But the combination of partisan and other divisions in Washington, events spinning out of control in Iraq, international isolation, and tremendous discontent with the war among the U.S. people mean this will not be easy.  It will be a moment when the antiwar movement’s “Out Now” message can gain even more traction and throw a huge wrench into the empire’s plans.

Facing another illegal occupation, the Palestinian people continue to resist the world’s fourth strongest military power.  In the most recent large-scale massacre in Gaza, Israeli shells killed 20 Palestinians, mostly women and children and many from the same family, in Beit Hanoun on November 8.

Rather than being cowed by the killings, Palestinians have responded with new mobilizations to protect individuals targeted for “extra-judicial” assassination.  On November 19, hundreds of Palestinians barricaded themselves inside the home of a Hamas militant after the Israeli military warned that he was about to be killed.  For the first time, the Israeli government called off a planned missile/bomb assault in face of this kind of nonviolent action — which was broadcast live on Palestinian television and rebroadcast to the entire Arab world.

Against the backdrop of Washington’s failure in Iraq, the anger Israeli treatment of the Palestinians provokes throughout the Middle East is causing some U.S. figures to question whether blank-check support for Israel is in U.S. interests.  Of special note is Jimmy Carter’s just published book, Palestine: Peace Not Apartheid.  For a former U.S. President (indeed, the architect of the Camp David Accords breaking Egypt off from the pro-Palestine front) to use the term “apartheid” in relation to Israel is unprecedented.  Carter has been roundly denounced (not least by fellow Democrats) and the book is being given the silent treatment by much of the media.  But especially following the bitter debate which broke out following criticism of the “Israel Lobby” by mainstream intellectuals John Mearsheimer and Stephen Walt, the book is an indication that there are new opportunities to expand debate over what is really happening in Israel-Palestine and mount opposition to Washington’s support for illegal occupation and racism.

FROM IMPERIAL OFFENSE TO IMPERIAL DEFENSE?

Elsewhere in the Middle East — and beyond — Washington faces trouble all around:

These realities and more seem to have finally punctured the Neoconservative fantasies that have dominated Washington for the last several years.  Longtime analyst Michael Klare argues that the Rumsfeld-Gates switch signals a significant turn in U.S. policy “from imperial offense to imperial defense. . . . Gates, Baker, and Associates understand full well that a vision of enduring U.S. supremacy will continue to govern American political thinking — and there will be many tests of American hegemony to come.  But more than others in and around the White House, they recognize that this is a time for adopting a defensive stance if the U.S. is ever to go on the offensive again.”

The opportunities before the antiwar movement in this kind of transition period go beyond Iraq.  The Iraq occupation is Washington’s weakest point, and on that focal point the antiwar movement can mobilize the largest numbers, extend its reach the farthest, and make a real difference in policy.  The new Congress — even those members seeking any excuse to stay in Iraq — is especially vulnerable to grassroots pressure coming off an election universally interpreted as a repudiation of the Iraq war.

Additionally, Washington’s vulnerability around Iraq, and the likelihood of a retrenchment in other areas, means some constituencies will be open to a larger critique of U.S. policy.  Right now only a minority of the antiwar populace self-consciously links their own security and well-being to that of peoples across the globe.  Only a minority rejects racist stereotypes about Arabs and Muslims (and racist assaults on immigrants) to embrace an inclusive agenda of justice for all.  The ranks of that minority can be expanded at a time when the elite is forced to readjust and public policy debates have wider boundaries than usual.

There are also complexities and dangers ahead.  Every concession Washington makes to antiwar sentiment will be accompanied by efforts to divide “anti-American extremists” from “legitimate critics.”  U.S. failures in Iraq will be blamed on the supposedly “ungrateful” or “backward” Iraqis themselves!  And it is still possible that Bush & Cheney — out of desperation, denial, or messianic zealotry — will launch a new military adventure multiplying many-fold the horrors already facing the world.

So there is no room for complacency.  But it is a new moment. The wheel has turned.  No Pentagon “Big Push” can succeed — but a “Big Push” from the antiwar side can knock them back on their heels.