The recent Immigration and Customs Enforcement (ICE) raids that paralyzed Swift and Company across the heartland of America were part of Endgame, a massive immigration enforcement operation launched by the Department of Homeland Security (DHS) in 2003.  Ultimately, it promises to be the biggest police operation in U.S. history.  The stated objective of Endgame is to “remove all removable aliens” from the U.S. by the year 2012.

This DHS goal could eventually entail the arrest, detention, and deportation of 12-15 million undocumented migrants, mostly Mexicans and Central Americans, currently residing and working in the U.S.  Once Endgame is in full swing and receives mass media coverage, the intimidation effect will likely spark substantial voluntary repatriation and significantly reduce the number of police actions required to execute the operation.

Though the stated objective of Endgame is clear enough, the hidden agenda of the operation remains officially undeclared — that agenda is to capture the undocumented migrants working in the U.S. and recruit serviceable individuals in a so-called “guest worker” program that will reduce them to a condition of transient servitude and further undercut the value of all labor in the U.S.

The historical precedent of Endgame is Operation Wetback, the forced deportation campaign that was conducted by the U.S. Border Patrol against Mexican migrants during the 1950s.  Though the operations are separated by over a half a century in time, the economic goals of both are essentially the same — to capture desirable workers in servitude and deport the rest.

The scope of the current labor scheme, however, eclipses that of its predecessor.  In the 1950s, the bilateral Bracero Agreement was used primarily to secure cheap Mexican labor to work in the fields of the American Southwest; this time, the pending national guest worker program will be used to recruit low-cost labor from south of the border to serve all sectors of the U.S. economy.

The infrastructure that will be needed to execute Endgame is already in place or under development. 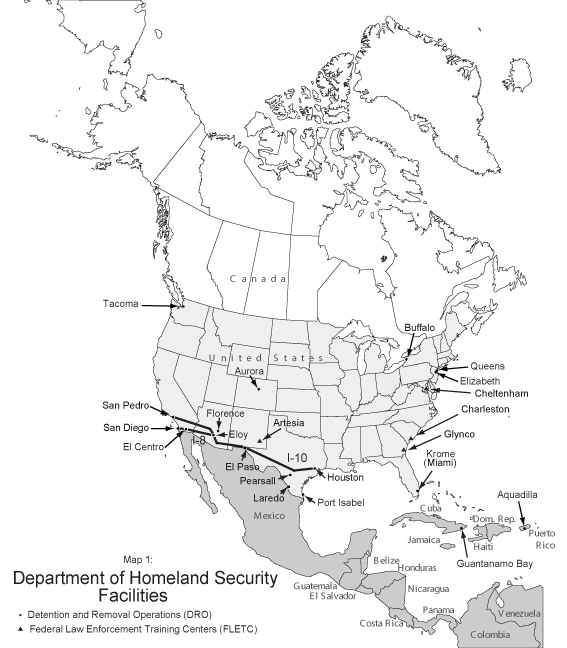 Map 1 shows the location of the existing Detention and Removal Operations (DRO) facilities of the DHS.  Most of them are located along U.S. Interstate Highway 10 that runs parallel to the U.S.-Mexican border from the Pacific Ocean to the Gulf of Mexico.  In these formidable DRO facilities, apprehended undocumented migrants will be detained and either recruited into the U.S. guest worker program by U.S. labor contractors or summarily deported to their country of origin.

The locations of the DROs at Miami, Guantanamo Bay, and Aquadilla suggest that they will be used to process migrant workers from Central America and the Caribbean.

In addition to infrastructure development, ICE is currently recruiting and training the substantial manpower that will be required for the execution of Endgame at the various Federal Law Enforcement Training Centers (FLETC) located primarily in the American South and Southwest.

The current training and equipping of ICE reflect the increasing militarization of U.S. immigration policy.   While the U.S. Border Patrol was reorganized along military lines and outfitted in smart military style uniforms in preparation for Operation Wetback, ICE conducts its operations as special forces units, dressed in black uniforms and armed with state-of-the-art assault weapons.

The need for the militarization of U.S. society for security reasons is a legitimate issue open to political debate.  However, the exploitation of the issue of homeland security as a cover to impose an unacceptable guest worker program on the nation is a different matter.

The legitimization of mass transient servitude in the U.S. will degrade the position of all working people in the U.S. vis-à-vis monopoly capital and must be confronted before it becomes entrenched in the national economy.

The future of free labor is jeopardized in any nation that embraces transient servitude.