“Dignity Returns” is becoming a unique clothing label and logo in Thailand, a “workers’ brand” at a factory run and owned entirely by its 30 workers in Bangkok.  The Solidarity Factory in western Bangkok is an example for garment workers anywhere in the world.  Turning out T-shirts, headbands, kids’ clothes, in an operation without bosses, without exploitation or abuse.  With fair wages for a fair day’s work, and Sundays off, a rare respite for super-exploited garment workers in this country.1

The venture was set up in March 2003 after most of the workers waged a long battle with the owners of the garment factory they had worked for until the end of 2002.  That factory had collapsed due to mismanagement, and over 800 workers were thrown out into the streets from one day to the next without any notice or promise of compensation.  In the end, a number of the workers banded together to run their own factory, getting loans from a range of sources, including the ministry of labor and their own friends.  Some equipment, even sewing machines, had to be borrowed.  Help from abroad has flowed in from Austria and Oxfam Australia, and other corners.

By the middle of 2006, total production was already entirely based on direct order contracts and the Solidarity Factory was able to break free completely from “sub-contract slave-pay.”  Low-paid sub-contracted orders are common everywhere in the “globalized”  textile world, including most of Thailand.  But not at Solidarity Factory.

Many things set the factory apart from the other 2,600+ garment factories across Thailand.  The workers do not have to wear a uniform, radio music pours down onto the open, airy factory floor, and the walls are covered with posters that celebrate labor rights.  “Let’s Show Capitalists That Global Labour Solidarity Is Real,” declares one poster.

Some of the workers are learning English, because they have no bosses to help them secure international orders.  The factory is, as a worker Kanchana stresses, “completely owned by the workers,” and there is freedom for the ”workers to express our views and get involved in decisions for the factory.”  ”We have no manager here, but three people have been nominated to check for quality,” says worker Manop.  ”The decisions are made at the regular meetings we have among us.”2 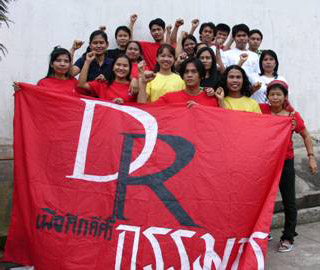 The factory helped run a workshop on its own example at the World Social Forum in Mumbai in January 2004, and the Solidarity Factory was much in evidence at the first Thai Social Forum last October, where several hundred Thais seeking options for the voiceless poor gathered, wearing headbands produced by “Dignity Returns” with the slogan: “Another world is possible.”  Under the watchful eye of the military regime.3

For activist Junya Yimprasert (Thai Labour Campaign), the workers at the Solidarity Factory are embarked on a major experiment in running their own factory.  In the current climate of economic globalization, says Junya, ”this is a challenge to exploitation, to businesses that say ‘without us you die’.  These factory workers are asserting that an alternative is possible, which is an idea that capitalists are not in favour of.”4

Junya adds: “the workers of the Solidarity Factory have won back their dignity through determination and the making of their own logo, own designs and their own high-quality products.  With their logo ‘Dignity Returns’ the Solidarity Factory could be described as being amongst the foremost garment factories in Thailand, demonstrating to workers in oppressed circumstances all around the world that dreams can be achieved. . . .  We are all really proud of the feeling that we are part of the workers who have proven to the world that ‘worker’s brand is not impossible’, and that — if we can do it, other workers can do it too.”5  Many local unions in Thailand are customers of the factory’s products, with growing appreciation of what “union-made” spirit means.

This Thai mini-model of worker autonomy functioning in the very vortex of Thai capitalism is in some ways a small Southeast Asian analogue to new workers’ politics taking shape in Argentina, involving horizontalidad, new non-hierarchical structures of solidarity, and a different way of taking control of your own lives, in neighborhoods, workplaces, driven by a politica afectiva.  That is manifest in the many scores of occupied and recuperated factories, arts and independent media collectives, indigenous communities, neighborhood assemblies, feminist, gay, and unemployed workers’ movements across Argentina today, spawned from a movement that erupted in late December 2001 (the workers’ “Argentinazo”).

The discourse of dignidad plays a key role in the recuperated factories in Argentina, reflecting a new sense of empowerment flowing from the self-organization and autonomy of working without bosses or hierarchy.  The notion of autogestión, worker self-management, central in the Argentinian horizontalidad ferment, is also paralleled in this small Thai workers’ paradigm and its structuring.6

The striking similarities here spring from a profound analogous sense of workers’ alienation, super-exploitation, and the courage to resist at the very core of their own colonized life worlds.  As a squatter and neighborhood assembly member said to Marina Sitrin in Argentina: “we are historical subjects, we’re through being passive subjects — that is what the vote, the system, offers us — we’re through being marginal, unemployed, excluded subjects. . . .  We control our own lives.”7

1  For an excellent description from the inside, see Lek Yimprasert, “Dignity Returns — a workers’ brand is possible!” Thai Labour Campaign, 19 October 2006.

Bill Templer writes on politics from several peripheries and teaches at a working-class university in the Thai provincial north.