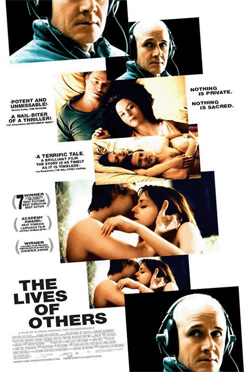 A film from Germany has a one-in-five chance of winning an Oscar next week: it’s called The Lives of Others.  The film was cleverly written, well directed, and well acted.  Why do I hope it does not get the valuable little statuette?

It is the story about a dogmatic officer of the East German “Stasi,” the State Security, who in the end, after a change of heart, proves that even a Stasi officer can be a human being.  Interesting, perhaps, but misleading, one-sided, and with evil intent.

Few deny that the Stasi in the German Democratic Republic was intrusive, nasty, and sometimes rough.  But the film reduces the entire country to this clichéd image.  It shows only a malevolent Minister of Culture, the criminal methods of bugging apartments and tapping phones, and the innocent victims — like the writer who wants only to smuggle out the awful truth about the GDR to the West German magazine Der Spiegel — and a single heroic exception who sees the errors of his ways.  How clear and simple!

This film plays to the fact that any book, film, or TV program telling people in Eastern Germany how terrible their lives were under “Stalinism” and making West Germans shudder to think of what they escaped is sure to be promoted and, if not all too primitive, to receive awards, prizes, publicity, and innumerable screenings.  And so it has been.

What does the film leave out?  That despite many problems and some unpleasant aspects of East Germany, most people led relatively normal daily lives, which included certain benefits sorely missed today, like free child care, a democratic school system, where kids learnt together until the 10th grade, and were not split up as early as the 4th or 6th grade into “high achievers” and mostly working-class and immigrant kids who were sent to dead-end schools.  Some also recall the health system, usually less modern, but available to everyone without charge after a small monthly tax was paid.  Above all, it provided jobs to everyone, men and women, young and old, only a faint dream today.

It is largely out of worry that older generations may reflect on such lost advantages or younger generations learn of them and demand them that films like this are promoted.  They are rarely direct lies, which would be quickly rejected.  Indeed, such things as depicted in this film — a government official, like the film’s Minister of Culture Hempf, ordering Stasi investigation on a man so he can get his hands on the man’s wife — may really have happened.  Who knows?  But no Minister of Culture in East Germany was ever such a miserable rotter as the fictional Minister Hempf.  The first to hold this office was a famous anti-Nazi poet; another was a brilliant Jewish exile during the Nazi years, who, after serving as Minister of Culture, became ambassador to Italy and Vatican City.

There was one party leader who did indeed display foul, womanizing conduct not unlike that in the film.  But he got thrown out on his ear.  And have other countries no big shots who misuse power to gain sexual favors?  Do no other countries have secret services which snoop, pressure, or act horribly?  The word COINTELPRO gives a hint of an answer.

The terrible secret which the good writer smuggles out to Der Spiegel in the film was that the GDR was concealing its high suicide rate.  It was definitely high.  But for some strange reason unmentioned in the film is the fact that the suicide rate is unusually high in all of Central Europe.  This applied to both sides of the Iron Curtain, in Austria as in Hungary, in Denmark or Sweden as in Czechoslovakia, in West Germany as in East Germany — and especially in West Berlin.

A key scene in the film is the Stasi’s extremely exact examination, letter by letter, of a hidden typewriter used by the hero.  What struck me was the similarity to another case when letters of a typewriter were magnified and examined.  That was in 1947 in the trial of Alger Hiss, directed by the Red hunter Richard Nixon, but there the roles were reversed.  I can’t help wondering whether the West German film writer recalled the Hiss trial, subconsciously perhaps, and turned it around.

One aspect of the film does not reflect on the undoubted acting ability of Ulrich Mühe, who plays the film’s hero, but perhaps on his character.  Just when the film was getting early publicity, he came out with a blistering denunciation of his former wife, the very popular GDR actress Jenny Gröllmann, whom he accused of spying for the Stasi.  I do not know what truth there was to this, but a very disturbed audience of East Germans did find out that his charges were made while the actress was in the last stages of cancer.  She died soon afterward.  The Film Academy in making its awards is expected to judge acting ability, not character.  Many in German film theatres could not completely separate the two and had mixed opinions about this clearly axe-grinding film with a message, aimed against a long defeated enemy, but aimed to please the powers-that-be.