Boots Riley — The Coup‘s revered, thought-provoking MC — is hoping to utilize a post of his band’s incendiary, anti-war song “Captain Sterling’s Little Problem” on its MySpace Blog as a means to spark a G.I. Rebellion against the War In Iraq. 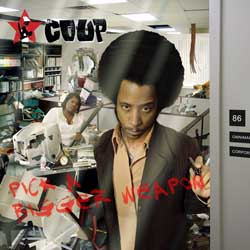 Riley is encouraging The Coup’s 25,000 MySpace friends to download the “Pick A Bigger Weapon” track, which features guitar by Rage Against The Machine’s Tom Morello, for free and send it via email or burned CD to everyone they know in the military.  In doing so, Riley believes the G.I. dissent could prompt Congress to act more decisively.

“I have this suggestion: the soldiers should demand to be returned home, using any means necessary to make this happen,” Boots blogs.  “This would lead to a swift end to this war, saving countless lives, both U.S. and Iraqi. . .  Congress hasn’t done more than give lip service to wanting the war to end.  The people that are directly affected by this war are going to have to act.”

“Captain Sterling’s Little Problem” was originally recorded as the theme for Sir! No Sir!, David Zieger’s recent documentary of the Vietnam War.  Inspired by the stories that some of the veterans tell in the film, Boots reports that “at one point a Pentagon report deemed half of the soldiers in Vietnam were ‘mutinous and not to be trusted’,” adding that “the largely unreported G.I. rebellions played a very important role in stopping the Vietnam war.”

Counting lines like, “You brought us to this country not to free but bodybag them/And free up all their money so accounting firms can add them,” the scorching song — from the Associated Press’ #1 album of 2006 — cannot be ignored.

“So far about 600,000 Iraqi civilians have died in this war and at least 3,100 U.S. soldiers have died,” Riley writes.  “Much has been publicized about the role that music plays in the military today.  I’ve seen a few news segments about the music that soldiers are listening to on their Walkmans and MP3 players — how they listen to certain songs to get in the mood to do what they have to do.  Besides the motivation of purely expressing my thoughts, my experience and my emotions, I also make music to influence people to see my point of view.”

Riley — who was recently selected as keynote speaker for UC Berkeley’s Black Graduation on May 12 — will join The Coup for an explosive set next month at the Coachella Valley Music and Arts Festival on Sunday, April 29.

This article was first published by Epitaph Records and JamBase among other sites.