In the only provincial election of the year in Germany, voters in the city-state of Bremen in northwestern Germany punished the ruling coalition parties, the Social Democrats and the Christian Democrats, for their policies and, for the first time, sent deputies from the newly forming party, The Left, into a legislature in West Germany.

The Social Democrats remained the strongest party, as they have been in Bremen since the Federal Republic was formed, but they lost over 5 percentage points.  The Christian Democrats, the party of Angela Merkel on the national level, also lost nearly 5 points.  The Greens, part of the opposition on both the national and local level, made big gains in what was clearly a protest vote, and have a chance to replace the Christian Democrats as junior partners in the new provincial government of Bremen, if the Social Democrats wish to alter their course. 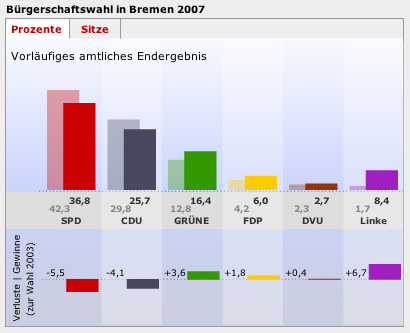 But the really big news was the victory of The Left.  The Party of Democratic Socialism is relatively strong in the East German provinces, where it usually averages 15 to 25 percent of the vote, and it is part of a ruling coalition with the Social Democrats in Berlin.  The WASG, the Electoral Alternative for Security and Social Justice, is relatively new, much smaller in number, and concentrated in western Germany.  Now the two are in a process of amalgamation, which will be completed on June 16th when they merge completely to become The Left.  Thus far neither of the two components has ever been represented in any West German province — where a five percent result is required to get into parliament.  Now, in Bremen, the new party, with candidates from both the PDS and the WASG, which had hoped to get about 7 percent, has surprised everyone, including itself, with nearly 9 percent, thus giving it 7 or 8 seats in the new legislature. 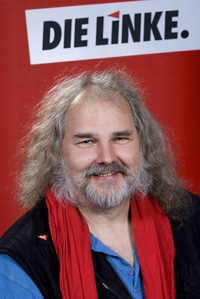 While the mayor, the head of Bremen’s Social Democrats (SPD), proclaimed from the start that he would never even consider including The Left in a coalition government (in keeping with red-baiting traditions in West Germany), the head of The Left, its Number One candidate Peter Erlanson, proudly stated that the Left did not even want to be in a new government, but would conduct a very lively opposition in fighting against privatization of health facilities, promoting jobs in a city plagued by the worst unemployment figures in western Germany, and in better social services for everyone.

Erlanson, a union leader in a local hospital, who has been nicknamed “the Karl Marx of Bremen” because of his big beard and long hair, jubilantly announced the fighting position his party would be taking in the years ahead.  He promised “disquiet and transparency” as the two main goals.  His rejection of any idea of joining a government coalition, even if it were to become possible, was welcomed especially by those members of the emerging new party who are highly critical of the role played by the PDS in the Berlin city government, where a long series of compromises resulted last year in a disastrous defeat in local elections.

The neo-Nazi group DVU (German People’s Party) got 2.9 percent, less than the required amount, but since the neighbor city of Bremerhaven is included in the results, and the neo-Nazis have long been stronger there, they will probably have one seat in the joint parliament, and a local extreme rightwing party will probably also get one seat.  This will make Bremen the fourth German province where the neo-Nazis have parliamentary seats; the other three are in East Germany.

The next provincial elections will be held in 2008 in four more West German provinces, and the Left is hoping it can repeat its Bremen success by getting the needed five percent in at least some of them.  The next national elections are scheduled for 2009.