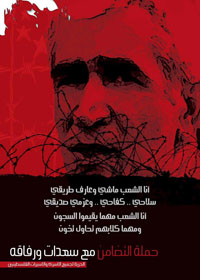 Sa’adat’s trial is scheduled to begin on July 29 at the Ofer military base in Ramallah, Palestine.  Sa’adat, with five other Palestinian prisoners, was kidnapped by the Israeli military on March 14, 2006 after a siege upon the prison in Jericho, where he was being held under a U.S. and British guard at a Palestinian Authority prison.

This is a campaign of human rights activists and concerned people from around the world, coming together to address the travesty of justice taking place, and calling for justice and freedom for Ahmad Sa’adat and all Palestinian political prisoners.

We are asking you now to join us in calling upon international human rights organizations to make clear statements about and prioritize this case.  Ahmad Sa’adat is a prisoner of conscience, subject to the illegitimate military courts of an illegal military occupation.  Indeed, the “security-related charges” against him, such as they are, embody political persecution and targeting for repression due to political activity, including such charges as membership in a forbidden organization (the Popular Front for the Liberation of Palestine, of which he is General Secretary), holding a post in a forbidden organization, and incitement — for a speech delivered after the murder of Abu Ali Mustafa, the previous General Secretary of the Popular Front for the Liberation of Palestine, by the Israeli military, as he worked in his office.

Ahmad Sa’adat is joined by thousands of other Palestinian prisoners, including other Palestinian political leaders, in facing imprisonment by the authorities of an illegal military occupation.  These include 41 members of the Palestinian Legislative Council elected in 2006, including Sa’adat, Aziz Dweik, chair of the PLC, and Marwan Barghouti, prominent Palestinian leader.

Your help and support are needed to secure justice and freedom for Ahmad Sa’adat and Palestinian political prisoners.  Please take action today!

Your support is critical for this campaign.  In order to place meaningful pressure on the Israeli state to cease its persecution of Ahmad Sa’adat and all Palestinian prisoners, it is crucial that this issue take on a high level of international mobilization and support.

To that end, we are calling upon noted human rights organizations to take a stand concerning the trial of Ahmad Sa’adat.  During the imprisonment of Sa’adat and his comrades in Jericho prison, various international human rights organizations continued to shed light on their unjust imprisonment.  In the over one year following the Israeli military’s attack upon Jericho prison, and its kidnapping of the men inside, the Israeli military court has repeatedly postponed Sa’adat’s trial — a trial that is itself illegitimate, based as it is upon an illegal military occupation.

Please join us in requesting that Amnesty International and Human Rights Watch take an active role in advocacy work around the case of Ahmad Sa’adat.

Click on the link to send a letter:
<freeahmadsaadat.org/action.html>.