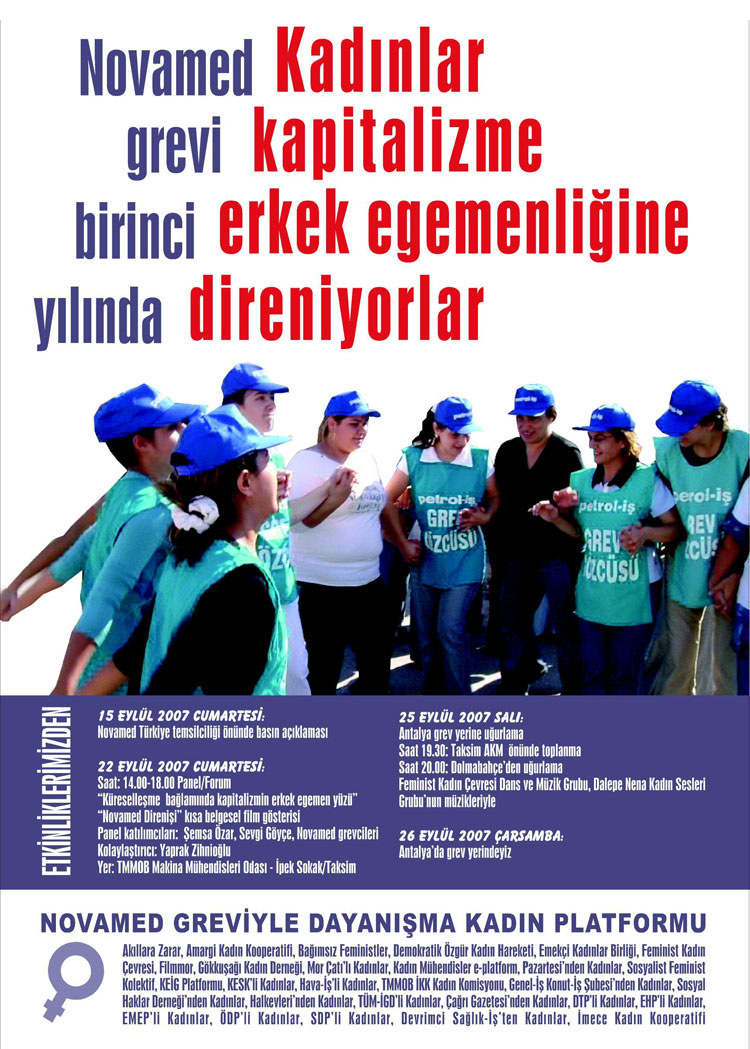 You may have heard about the strike in Novamed in Turkey/Antalya.  Novamed is one of the factories of Fresenius Medical Care located in Germany.  All the workers who have gone on strike are female workers.  Their working conditions are very bad and male-dominated (patriarchal).  For example: female workers are required to apply for permission to marry.  Married women should get pregnant and give birth in accordance with the schedule arranged by the management.  They are humiliated by the managers on account of their sex.  Attached you may find a detailed information sheet prepared by the union, called Petrol-Is.

At the end of September, the strike will be one year old.  A group of women (female workers and female union representatives, feminists and women from political parties) will organize a campaign for that in Istanbul.  As a last step of the campaign, there will be a visit to Antalya for supporting our sisters on 27th September 2007.  Therefore we ask you to support our campaign.  Your support is very valuable for us.  You can publish this news in your magazine or web page.  Petrol-Is has already established international contact with European unions.

SUPPORT THE FRESENIUS WORKERS ON STRIKE IN ANTALYA, TURKEY

The strike started by workers organized under Petrol-Is on 26 September 2006 at Novamed GmbH in the Antalya Free Trade Zone, Turkey, is going on.

This strike has two distinctive features:

Who Is Fresenius Medical Care?

Germany-based Fresenius Medical Care is the world’s largest, integrated provider of products and services for individuals with chronic kidney failure.  Through its network of approximately 2,078 dialysis clinics in North America, Europe, Latin America, and Asia-Pacific, FMC provides dialysis treatment to approximately 161,675 patients around the globe.  Fresenius Medical Care is also the world’s largest provider of dialysis products, such as hemodialysis machines, dialyzers, and related disposable products (for example, bloodlines).

Fresenius Medical Care has been operating in Turkey since 1996.  Turkey is one of a few countries throughout the world where both dialysis care is provided and dialysis products are manufactured and marketed by it.

Since 2000, Novamed GmbH, one of the plants of Fresenius Medical Care in Turkey, located in Antalya, has been manufacturing bloodline systems (approximately 8.000.000 per year), and the sterilization, quality control, and test operations of these products are done within the same plant.  Approximately 300 workers are employed by Novamed.

After the organizing work at the workplace was launched by our union, Petrol-Is, this inhuman practice diminished.  However, the repression practised by the management went on in disguise.

The management refused to recognize the union at the worksite and launched a systematic anti-union repression designed to urge Petrol-Is members to resign from the union.

Petrol-Is has been able to overcome all these difficulties and anti-union repression, particularly through the solidarity provided by the German chemical workers’ union, IG BCE.

Petrol-Is at the Bargaining Table

Having the legal authorization to negotiate and conclude a collective agreement at the workplace, Petrol-Is started to bargain collectively with the Novamed management on 19 April 2006.  However, it was quite difficult to reach an agreement due to the Fresenius-Novamed management’s persistent and obstinate attitude.

At every stage of the bargaining process, the management have persistently maintained the anti-union repression.  Furthermore, the management threaten the workers with moving the plant away to another country.

Meanwhile, the management have hired 50-60 new workers in order to break a probable future strike.

As a result of the above-mentioned attitude of Fresenius and Novamed executives, the Novamed workers in Antalya went on strike on 26 September 2006 for decent work and life.

We ask the Fresenius Management Some Questions

Novamed workers under Petrol-Is are on strike for decent work and life.

We call on honest people to send messages of support to:

We call on honest people to send protest messages to the following Fresenius executives: