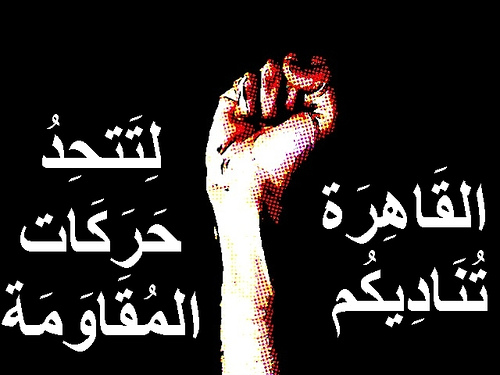 The political forces, popular committees, civil society organizations, and independent personalities, of the Egyptian Organizing Committee of the Cairo International Conference and Liberation Forum, declare the following principles as the fundamental basis for the Conference and Forum, and invite all concerned political and popular forces, organizations and independent personalities, in Egypt, the Arab World and the world at large, who share these principles, to participate in the planning and organization of the Conference and Forum.

Al-Karamah Party; the Muslim Brotherhood; Al-Wasat party, Al-A’mal party; the Revolutionary Socialists’ Organisation; Arab and African Research Centre; al-Nadeem Centre for Rehabilitation of Torture Victims; Egyptian Association for Combating Torture; Egyptian General Committee for Boycotting Israel and the US; the South Group for Culture and Development; Hisham Mubarak’s Centre for Law; Centre for the Freedom of Thought and Expression; Arab Network for Human Rights Information; Egyptian Movement for Change (Kefaya); Popular Association for the Protection of Citizens from Unfair Taxation and Corruption.

Photos from the 2007 Cairo Anti-War Conference could be found here.

This English translation for the invitation to the 2008 Cairo conference was provided by Hossam el-Hamalawy at his blog 3arabawy at <http://arabist.net/arabawy/>.  Read the invitation in Arabic at <http://www.e-socialists.org/node/291>.