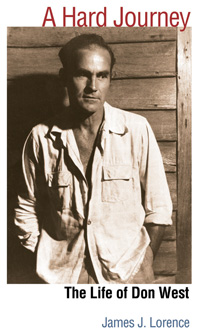 Historian James Lorence has written an engaging biography of a man many have come to regard as a modern-day folk hero.

Don West was a legendary public figure in these parts when I first met him in Charleston, West Virginia, in 1988.  He enjoyed a local reputation as a populist poet, as well as a social and cultural advocate for Appalachia.  Being the founder and director for the Appalachian South Folk Life Center in Pipestem, West Virginia, made him a public figure known to many.  He was also the husband of artist Connie West and father of musicians Hedy West and Ann Williams.  One of the values of A Hard Journey is discovering just how much more there was to this remarkable person.

Born in rural northern Georgia in 1906, West would go on to lead an eventful life of an uncompromising activist committed to racial and economic justice.  He was already a student activist for social causes when he entered divinity school in 1929.  There West embraced a populist version of social gospel theology, all the while embarking on a life-long practice of literary work at the same time as fellow students Jesse Stuart and James Still.

West would go on to help found the Highlander Folk School in Tennessee with Myles Horton, animated by a vision of training Southern labor organizers.

In 1933, West returned to Georgia to work on behalf of Angelo Herndon, an African American organizer for the Communist Party who had been arrested under a Reconstruction-era law against insurrection.  Although previously associated with the Socialist Party, West was drawn towards the Communists for their militant stand for racial equality in the South.  Within a year, he was engaged in union organizing among textile workers in North Carolina and, soon after, coal miners in Kentucky.

In 1946, Clods of Southern Earth, his first poetry collection, was published and sold remarkably well.  By this time, West had been serving as a Congregationalist minister in Ohio, but his social and political activism had continued unabated, and his poetry clearly reflected his radical beliefs and commitments.

Under government surveillance for his political ties, West returned to rural Georgia and spent time farming, as well as organizing for the Progressive Party, which in 1948 nominated for president Henry Wallace, who had previously served as Pres. Franklin Roosevelt’s vice president.  After weathering the McCarthy era, West ended up teaching college in Maryland during the early 1960s, just as the nascent New Left of the Students for a Democratic Society was coming into their own on campus.

By 1966, West had returned to his native Appalachia to found a school and folk festival at Pipestem, West Virginia, with which he would remain associated for the remainder of his life.  In the early 1970s, he collaborated with Marshall University students on publishing material as the Appalachian Movement Press, a key voice in the grassroots regional movement.

This book chronicles a life of unwavering commitment to the cause of the working class and racial and economic equality.  Thanks to Lorence’s book, those of us in the Appalachian South — and indeed elsewhere — can take a deeper inspiration from West’s life and writings.

A Hard Journey can be purchased directly from the University of Illinois Press, www.press.uillinois.edu.

Gordon Simmons is statewide chief steward of UE Local 170 – the West Virginia Public Workers Union.  He works for the West Virginia Division of Culture and History as an editorial assistant at Goldenseal, a magazine of West Virginia traditional life.  This review first appeared in the December issue of the UE News.  Learn more about UE at www.ueunion.org.