Des Moines — Hours before voting begins in the nation’s first presidential poll, peace activists placed the Iraq war front and center again this afternoon as they occupied the Iowa headquarters of Senator Hillary Clinton for the second time since campaigning began last fall. 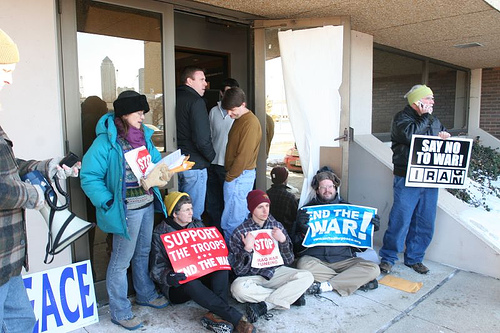 Three Hillary Clinton campaign staff guard the entrance to her Des Moines, Iowa headquarters as peace activists conduct a sit-in to protest the candidate’s support for the war in Iraq.  Photo by Mauro Heck.

Over a dozen members of a campaign called “Seasons Of Discontent: A Presidential Occupation Project” (SODaPOP) went to Clinton’s office, saying they still had not gotten a response to a letter delivered in October demanding she publicly oppose any more spending for the war or occupation and foreswear an attack on Iran.

But as the peace activists approached Clinton’s East Second Street office, staff members locked the main door and refused admittance.  At a locked side door, a Clinton staff person was admitted but could not close the door before Jeff Leys, co-director of Voices for Creative Nonviolence, sat down in the doorway.

Leys, speaking on the phone as he remained in the doorway, said about another 15 peace activists were standing outside the entrance helping block it, several Clinton staffers were blocking the doorway into the office, and that no one was going in or out.

Asked why the campaign targeted Senator Clinton’s Iowa headquarters again, Leys said “because she is the most hawkish of any of the leading candidates on foreign policy and she refuses to commit to ending the war in Iraq.”

He said that they are also concerned with Senator Clinton’s connection to the Center for a New American Security (CNAS), at which she gave a keynote address for the center’s launch in June 2007.   One of its initial reports released that day, “Phased Transition,” concluded that ” . . . as a rough estimate 25,000 to 40,000 American troops might remain in Iraq” until as late as 2012.

“While the people of Iowa are exercising their legal right to go to the caucuses to choose their presidential nominees, it is appropriate that we exercise our extra-legal rights of nonviolent protest to bring this war to an end,” Leys concluded.

Extra-legal or not, Clinton’s office was reluctant to file a complaint that would trigger arrests, so police withdrew after being on the scene about an hour.  Protesters continued their vigil until about 5 pm, by which time nearly all the Clinton staff had left.

Caucus voting was scheduled to begin at 7pm Iowa time and a “Caucus Night Celebration with Hillary” was scheduled at a downtown Des Moines hotel later in the evening.

Clinton’s Des Moines press office was contacted for a statement but had no comment.

Mike Ferner is a freelance writer from Ohio.