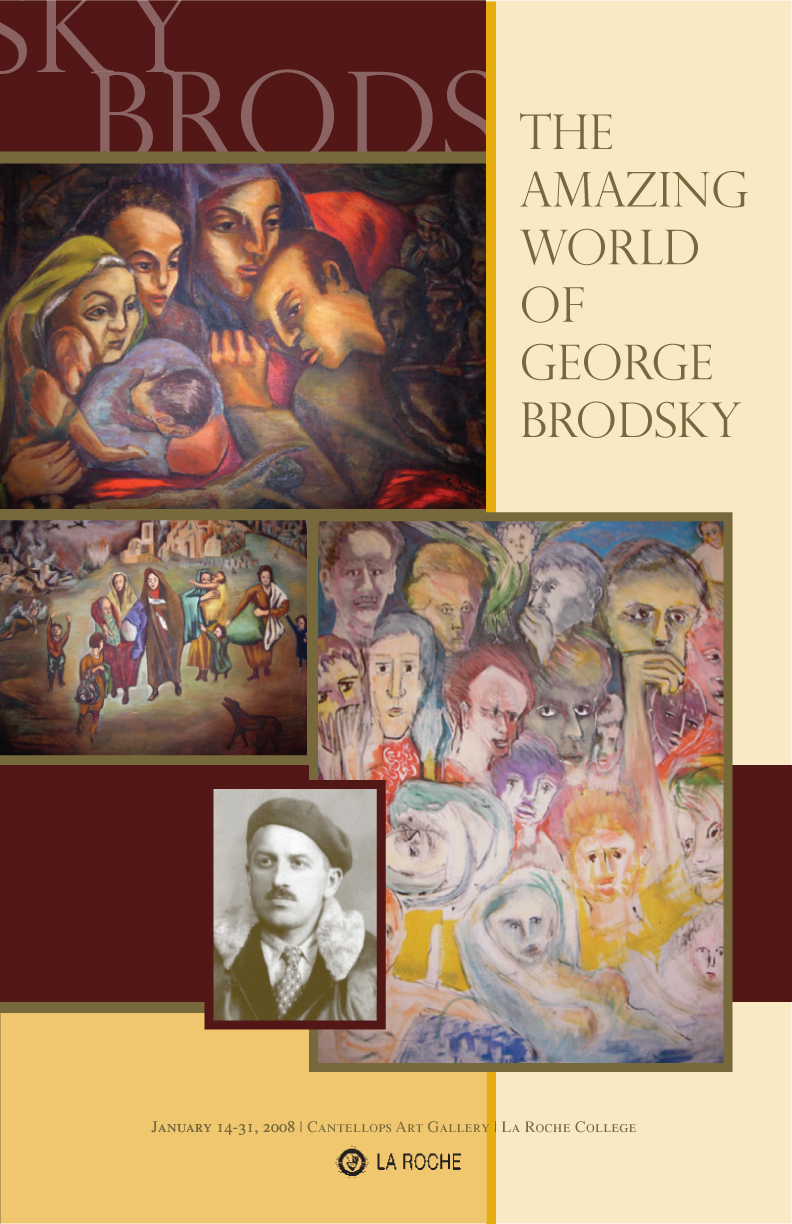 The Cantellops Art Gallery at La Roche College will feature the first-ever exhibition of American artist George Brodsky (1901-1999) from Jan. 14-31.  “Beyond Abstract Art — Reflections of Life on Shell, Rock, Bark and Flat Surfaces: The Amazing World of George Brodsky” will be open to the public for viewing daily from 10 a.m. to 5 p.m.   A special reception celebrating the show will take place from 5 to 7 p.m. Tuesday, Jan. 22, in the Ryan Room on the La Roche campus.  The public is invited.

Brodsky was a minor but innovative figure on the U.S. artistic scene.  Swept up in vibrant artistic currents in the 1920s, his work was profoundly impacted by the Great Depression and the Spanish Civil War in the 1930s, shifted to landscapes in the 1940s, and then ceased — until an incredible welling-up of creativity in his later years, flowing onto surfaces provided by sea shells, rocks, tree bark, and magazine pages.  Brodsky’s art was influenced by a number of other artists with whom he was associated, including John Sloan, Reginald Marsh, Boardman Robinson, Alexander Calder, Raphael Soyer, Moses Soyer, William Gropper, and Ben Shahn, José Clemente Orozco and David Alfaro Siqueros.

In 1977, commenting on the distinctive turn that his art had taken, Brodsky wrote: “Continuing to work on flat surfaces, I was irresistibly drawn to painting and drawing on sea shells picked along the Atlantic shore not far from my home [in Forest Hills, New York].  Then in the quarries and rivers of Vermont, I found rocks and stones to paint and draw on.  More recently, I have added bark as a surface to paint on.”

Brodsky was the great uncle of La Roche College professor and dean of the School of Arts and Sciences Paul Le Blanc, Ph.D., who organized the exhibit with Lauren Lampe, M.F.A., professor in the college’s Graphic & Communications Design program and director of the Cantellops Gallery.  The works are available, en masse, to travel to other exhibition sites.  To that end, Le Blanc said he hopes to find an art devotee who may want to house the works in the future and guarantee their availability to the public.

“I am one of George’s last living relatives, and I think it would be wonderful to have the exhibit housed by someone or some organization that will be able to hold it for generations to come,” he said.

For more information on the exhibit, interested people may contact Le Blanc at paul.leblanc@laroche.edu.  Directions to La Roche’s Cantellops Gallery are available at www.laroche.edu.

In the early 1930s, Spain shifted from being a monarchy to a Republic.  In 1935, a left-wing influenced Popular Front government won democratic electionsby a slim majority.  In response, there was amilitary uprising headed by General Francisco Franco andsupported by fascists, monarchists, conservatives, and others hostile to the new government.

This uprising was largely blocked by a general strike of the labor movement, and a coalition of socialists of various kinds, liberals, Communists, anarchists, as well as Catalonian and Basque nationalists who defended the Spanish Republic. This led to a bloody civil war.

Hitler’s Germany and Mussolini’s Italy provided massive support to General Franco’s insurgency.  Only Mexico and the Soviet Union, both relatively poor, supported the Spanish Republic — although idealistic volunteers from around the world went to Spain to fight against fascism.  Most of these were organized in what were called the International Brigades — including over 3000 men and women from the United States, who became associated with the Abraham Lincoln Battalion.  George Brodsky was among these.  About half of the U.S. volunteers were killed in the conflict.

The Spanish Republic fell in 1939, and General Franco set up a right-wing dictatorship.  World War II began shortly after.  After Franco’s death in 1975, with a wave of protests and reforms, Spain again became a democratic republic.

FILMS.  Motion pictures having to do with the Spanish Civil War, available on video and DVD, include:

BOOKS.  Among the thousands of books about the Spanish Civil War are the following: