The German elections on Sunday, like so many Hollywood films, were full of suspense until the last minute.  Was there also a happy ending?  To use the handy German word combination for Ja and Nein — Jein.

The elections were for the legislatures in two of Germany’s sixteen provinces, Hesse and Lower Saxony.  In the latter, with its capital in Hanover, it was clear that the Christian Democratic Union (CDU) headed by Christian Wulff could easily continue its coalition with its big business partner, the Free Democrats (FDP).  Wulff is fairly moderate as conservatives go and his province has been doing moderately well.  He did win and the weak Social Democrats got swamped.

It was a different matter in Hesse, where the arch-reactionary minister president Roland Koch had won twice in the past by beating the anti-foreigner drum.  And when a subway video camera in Munich caught shots of two young men beating up a pensioner (for ordering them to quit smoking) and it turned out that one man was of Turkish, the other of Greek, background, Koch immediately demanded the harshest of measures against juvenile delinquents of foreign descent, tough “boot camps,” reducing the age of severe punishment even below 14, and deporting young offenders to the homelands of their parents.  Taking a cue from some US politicians, he played on the crudest prejudices against Turks, Arabs, Africans, and anybody else with darker hair or skin color than his own.  The rabid tabloids and channels jumped in to support him.  The national head of his party, Angela Merkel, did the same, slightly less eagerly.  But his vicious campaign backfired so badly that his Christian Democratic Union (sic) lost over 12 percent of its previous vote, its biggest drop in history, but still just a few tenths of a percentage point too few, as it turned out.

There was another even more important aspect to both elections, however.  The PDS (Party of Democratic Socialism), though in second or third position in East German provinces, had never grown roots in Western Germany.  When it teamed up last year with a small, young West German party to form a party called “The Left,” however, it was finally able to break through on a national basis with 8.7 percent and 54 seats in the Bundestag.  But could it now also overcome each five percent hurdle and get into West German provincial parliaments — and key political developments?  Last year it had a first success in Bremen.  This was a big gain psychologically, but Bremen was a city-state, with urban leftist votes most accessible.  Could it also overcome the hostile media propaganda and win seats in larger provinces like Hesse and Lower Saxony?  Friends and foes alike held their breaths.

Early on election evening, it was clear that it had succeeded in Lower Saxony, getting over seven percent of the vote, easily enough to form a small but important opposition. 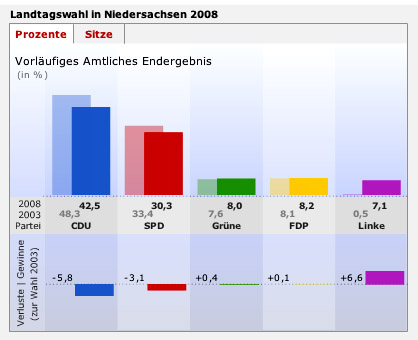 But in Hesse the early estimates gave it 4.9 percent, just under the required proportion.  After tense hours of waiting, this rose to exactly 5.0 percent, barely enough — if later returns did not inch back downwards.  But late in the evening they improved, and a safe 5.1 percent vote meant six seats in the legislature — a giant victory.  Yet big problems loomed ahead. 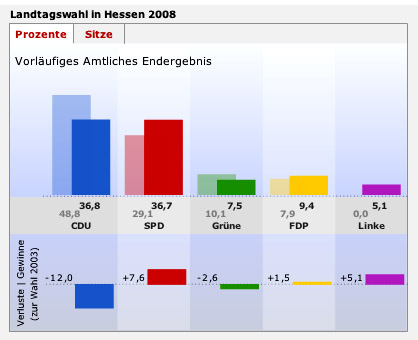 The Social Democrats in Germany, after years of abandoning support for social justice for workers, the jobless, the retirees, and the ailing, and supporting military adventures from the Horn of Africa and Lebanon to Afghanistan, found the hemorrhaging of members and votes to the new Left party so alarming that they decided to start talking like progressives again.  They suddenly discovered that demands by the Left for a minimum wage, a democratic school system, and an end to privatizing public utilities were good ideas after all.  Since they were coalition partners with the Christian Democrats on the national level, this resulted in lots of angry noises yet nothing that might really rock the government boat.  But in Hesse, far from Berlin, an attractive, able, and moderately left-leaning woman named Andrea Ypsilanti, the leading candidate of the Social Democrats, vigorously attacked the xenophobic Roland Koch, swiped positions of the Left, and demanded better conditions for working-class citizens, students, and others.

This led to a big increase and took the Social Democrats — in Hesse anyway — out of the doldrums.  There was wild jubilation in the party headquarters — and wherever people rejected the vicious anti-immigrant campaign led by Koch.  But as the evening wore on, the lead lessened until in the end Koch, despite severe losses, including the absolute majority, did manage to win by a very thin nose, about a tenth of a percentage point.  Now his CDU and the Social Democrats will each have 42 seats in the new legislature.  His allies, the Free Democrats, will have 11 seats, and the Greens, who took a beating in Hesse, will have 9.  That means 53 for a right-wing coalition, 51 for a SPD-Green coalition.  But with 110 seats in all, 56 are needed for a ruling majority.

This is why the 6 seats of the Left are so important.  If the Social Democrats and Greens invited the Left to join them, they would have 57 seats.  They might even work out a deal: the Left would not join the government but would “tolerate” it by not voting against it in key matters.  But on the one hand, the Left would refuse to support them unless such a coalition really took socially progressive measures (some in the Left party would refuse any support, while others waver).  On the other hand, both Social Democrats and Greens still insist that they will never link up in any way with those “nasty Reds from the East” or their new co-chair Oskar Lafontaine, who quit the Social Democrats nine years ago in disgust at its right-wing turns.  In other words, they seem to be continuing the traditional policy of their many predecessors — rather let the right wing rule than join with any who are too far to the left.

The situation at the moment looks like a stalemate, with the queen, Andrea Ypsilanti, stuck in one corner while King Koch in the other corner stays in power until April, when final decisions must be made, possibly leading to new elections.

But come what may in Hesse, the Left achieved its great wish — it is now a force to be reckoned with, not only in its accustomed eastern pastures but in West Germany as well.  Unity and militancy are demanded more than ever before; neither is always easy to achieve as occasionally bitter experience has shown.  But the next goal seems favorable — the elections on February 24th in the big city-state of Hamburg, where it looks like another breakthrough for the Left.