Sociologist and historian at Yale University, Immanuel Wallerstein has described the globalization of capitalism, and today he criticizes Western “universalist” justifications of expansionism. 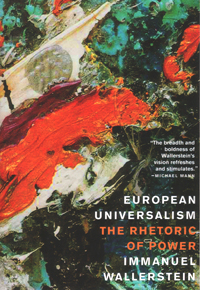 In your book European Universalism, you revisit the 16th-century debate between Las Casas and Sepulveda on the American Indians.  In what respect does this debate seem to you particularly relevant to the debate on universalism?

Immanuel Wallerstein: The intellectual justifications that Sepulveda gave, in the 16th century, to justify the conquests of the Indian lands are, almost word for word, the same ones used for colonization, and the ones that are given today for what is called intervention.  Moreover, Las Casas’ responses at that time seem to me much clearer than many criticisms of intervention today.  Sepulveda’s arguments were as follows: the others are barbarians, we must protect the innocent (whom the barbarians massacre) — constant justification for all interventions — and, finally, it is necessary to permit the diffusion of universalism, supposedly universal values.  At that time, it concerned evangelization and the expansion of the Christendom.  Today, these values are “freedom and democracy.”  But they are in fact the same thing.

Drawing upon the work of Braudel, you have elaborated on the concept of “world-system” to describe the political and economic environment.  What do you mean by this term?

Social science analyses during the 19th and 20th centuries rested primarily on a unit of analysis which was the state, encompassing society, particularly with the nation state.  All states exist in parallel with one another and follow more or less the same structural trajectory, even if some were more advanced than others.  For me, this formula rests on a quite inaccurate vision.  Rather, we have lived in a “world-system” since the beginning of the époque called modernity in the 16th century when the capitalist economy was born in an embryonic form in a small part of the world, Europe.  The world is thus a unit of analysis vaster than the state.  The capitalist system has gradually succeeded, by its internal processes, in extending itself to the totality of the world.  You can in fact see that, since the end of the 19th century, the whole world has been governed by this capitalist system, to this day.  Studying this world-system, in my opinion, makes it possible to enrich the approach of social sciences, by considering states as elements constituting themselves within this system.  But they are not the only elements of the system, in which races, classes, nations, households, etc. also exist.  All are institutions within this capitalist world-economy.  Above all, this concept allows me to show that, like any structure, it has gone through various phases: initially its emergence and establishment, then its development, finally the moment of its structural crisis, before that of its disappearance.  I think that we are currently living this moment of structural crisis, and, while I won’t venture to guess a precise date or time, we shall witness (perhaps twenty-five to fifty years from now) its disappearance — or rather its replacement by another thing.  One cannot say by what, for the time being, but the process is inexorably moving.

How is your criticism of European universalism articulated with this concept of “world- system”?

Consider this world-system — it needs an ideology, what I call a “geoculture,” allowing it to justify its structural development.  This book, European Universalism, is thus an effort to describe the rhetoric used by the powerful1: European universalism is used to justify imperialism, Western expansionism.  Obviously, variants exist in sophisticated arguments.  The first, the most brutal (as in Iraq today), consists in saying that the others are barbarians, whom we must tame.  A second variant, a little more subtle, studied by Edward Said under the name of “Orientalism,” claims that the others are different beings, fixed in their differences, to whom we must bring true civilization — an argument that one finds in Samuel Huntington in particular.  Lastly, a third type of argument is that of scientific truth to which one appeals to impose the Western point of view.  And, as it so happens, this alleged scientific truth is held by the most powerful countries in the world!

You observe that, in the relations within this world-system, for the powerful it is always easy to give but much more difficult to receive. . .

Indeed, the powerful do not accept the idea that they have something to receive from others.  They rebuff others who they think don’t have anything to offer them.  For example, George W. Bush just visited Benin: in his mind, what can he possibly receive from Benin?  Only the United States can give things to Benin.  The world-system, seen from the point of view of the powerful, rests on this type of relationship among its members.

During your conference at the Maison de l’Europe, on 20 February, Daniel Bensaïd declared: “Since 1991, our époque, in a way, has resembled 1830-1840, i.e. a utopian moment when the possible doesn’t have a face yet.  Hence, in the figure of the alterglobalization movement, the frequency of the term ‘Other,’ which is the unknown, the indefinite.”  Do you share his analysis?

In my opinion, this moment did not begin in 1991 but in 1968, when one witnessed a beginning of the collapse of great truths established and accepted for a very long time.  In this type of period, it is normal for people to fall into confusion, not knowing what to do.  Obviously, this impotence was reinforced again after 1991, when the Soviet Union, which had till then seemed immovable, ended up breaking down.  Since then, it is especially the Left that has seemed at a loss for points of reference, with a great deal of pessimism.  However, I believe that today we are seeing neoliberal globalization, which has extended itself everywhere since then, starting to show its limits: with the Zapatistas, Social Forums, Seattle, Genoa, people went back to discussion, in search of new experiments, new solutions.  In 2002, I wrote an article in which I said: “The United States has already lost its hegemony!”  At that time, people treated me as if I were crazy, but I don’t believe I was mistaken after all: we are there, the United States is well on its way to losing its hegemony!  That is why I believe that Bensaïd is right to say that we are now in a “time of Utopia”; for my part, I would rather call it a search for alternatives, where one wonders “what is to be done?”. . .  It seems to me that the Right, too, is increasingly finding itself in doubt, also raising the question “what is to be done?”. . .

The original interview in French was published in Politis on 6 March 2008.  Translation by Yoshie Furuhashi (@yoshiefuruhashi | yoshie.furuhashi [at] gmail.com).