Nine US soldiers have been killed in Afghanistan this week in a major attack attributed to the Taliban.

More US troops have been killed in Afghanistan than Iraq in the past several months. 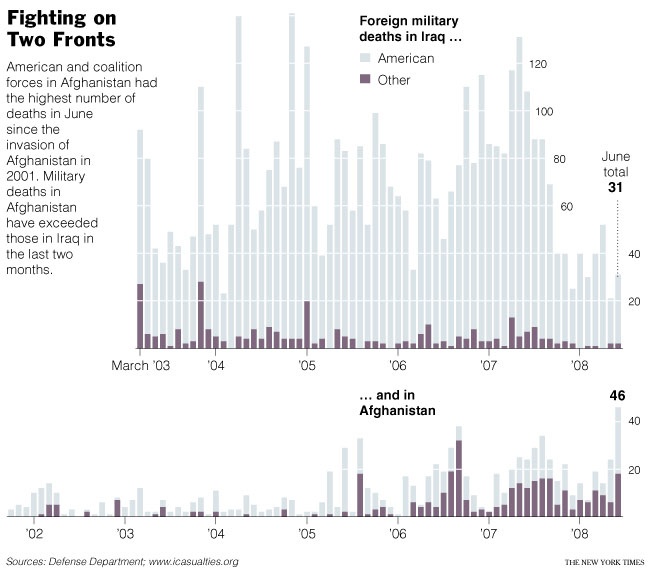 We can expect as a result that the Democrats and their Presidential candidate Obama will intensify their calls for shifting the “war on terror” to Afghanistan, where it should never have been abandoned for the invasion of Iraq.

We will hear talk of attacking Pakistan’s Northwest Frontier Province, even calls for invasion, I suspect.

Given the support for Obama by a significant sector of the anti-war movement, confusion about how to respond is sure to be noticeable.

In order to have some clarity on the question, a little research is necessary.  For example, what about that Afghan-Pakistani border?  Where did it come from?

Per usual for this part of the world, we find that the British had a hand in setting up the Durand Line, which separates Afghanistan and Pakistan’s borders.  This border crosses the territory of the Pashtun people, some 42 million of them, a population much bigger than that of Iraq.  The Durand Line was declared invalid by the 1949 Afghan Loya Jirga, but has been given legitimacy by court rulings upholding colonial divisions of territories across the globe.

There has been and still is a movement for a Pashtunistan nation.

So when we hear stories from the corporate press about the Taliban violating borders, let’s keep the above in mind.  And when we hear denunciations of the Taliban, universally supposed to be the devils incarnate and sponsors of Al Quaeda, let’s remember that for the Pashtun people, it is very likely that repelling the foreign invaders, whether from the US, Afghan, or Pakistani government, is a far likelier motivator for war than the religious theories of a particular Islamic sect.

More US troops in Afghanistan will change nothing.  There is not going to be any solution in the lands of the Pashtun coming from foreign occupiers. Given the Pashtun code of honor, that demands retribution for unjust attacks, US escalation will only see increased resistance in response.  As we have just seen in the deaths of nine Americans.

The demand of the anti-war movement for Afghanistan should be no different than Iraq.  US Out!