It was the Rosa Luxemburg weekend again in Berlin, like every January, this time with an unusual highlight.  Despite the transportation delays caused by big snowstorms, two conferences and the traditional memorial march kept leftists from all over Germany and guests from other countries very busy.

The emotional peak occurred during the main conference on Saturday, organized by the newspaper junge Welt (“Young World”), with speakers from Honduras, Cuba, France, and Canada and discussions on the recession, the role of unions in fighting back, and the campaign to withdraw German troops from Afghanistan, recently strengthened by a courageous statement by the woman who heads the Lutheran Church in Germany. 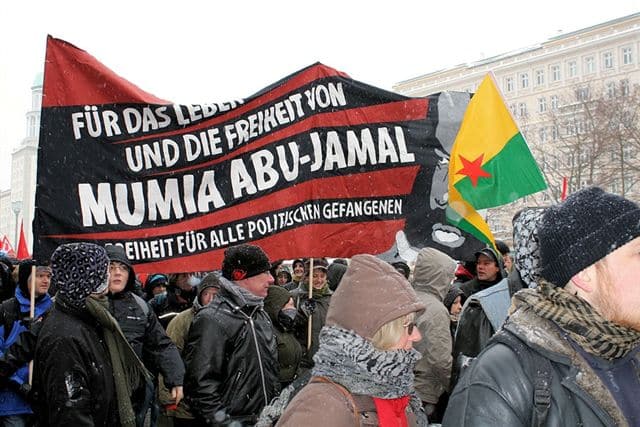 But it was lawyer Robert Bryan who warmed the hearts of the audience in the big hall, or rather his client Mumia Abu-Jamal, whose fight for life, recalling fights of previous generations for Sacco and Vanzetti or Angela Davis, was clearly known to the over a thousand people present.  A voice tape with Mumia has been featured at these annual conferences for many years.  But this time Bryan had arranged for Mumia to use his 15 minutes of telephone time to speak directly to the conference.  One journalist, Birgit Gaertner, described it this way:

Robert held his mobile to the microphone so that we all could hear him, and he could hear us.  Immediately there was tumultuous applause, minute after minute.  It was a breathtaking moment of overpowering feeling.  Robert told us that Mumia was in tears.  So was I.  And we realized that solidarity was not only important for legal or political battles but also, very personally, for him.

Mumia was allowed to speak with Robert for fifteen minutes.  Since he knew that so many were listening, he spoke of his daily life in prison and thanked everyone for the great support from Germany.  His fifteen minutes were soon used up, just a brief connection with the outside world, a small link with life, and then he had to plod back into his cell, shackled and handcuffed, alone again with the chaotic feelings undoubtedly stirred by the telephone call with Berlin.  Thinking about it brought new tears to my eyes.

A smaller conference on the same day brought together anti-fascist groups from all over the country to discuss how best to combat neo-Nazis who march every weekend through dozens of German cities and continue violent attacks on people who look foreign or look like leftists.  A big Nazi march is planned again for February 13th in Dresden, the 65th anniversary of the destruction of that city in World War Two.  In an attempt to win popular support based on this still emotionally charged event, they try to misuse it as a balance, “Dresden’s Auschwitz.”  The city police are again expected to protect the Nazi march as “legally permitted,” but the anti-fascists decided to try again to block its route under the slogan “non pasaran,” “They shall not pass,” recalled from the Spanish Civil War.  The Nazis expect up to 10,000 in a region where they are particularly strong.  The anti-fascists are intent on outnumbering them.

On Sunday, after the conferences, the participants in the march were certainly more numerous.  The goal was the big memorial stone dedicated to Rosa Luxemburg and Karl Liebknecht, the great, very beloved socialists who fought to end World War One and then helped found a Communist Party just two weeks before they were murdered.  Between 3,000 and 10,000, depending on who was counting, chose the longer route through the wide Karl Marx Allee, defying bitter cold and snow-filled streets.  They formed a colorful bouquet of leftist groups, some from Die Linke (The Left) party, others from the Communist Party or others of many views and directions, mostly ultra-left, Maoists, groups still waving flags of the German Democratic Republic and its youth organization, one Turkish group with a banner showing Luxemburg, Liebknecht, and Lenin as well as Stalin and Mao.  There were also Greek Communists, Basque supporters, Kurdish groups.  The banners competed in color and size, but all the very varied groups walked peacefully together through the snow.  Six blocks before the Cemetery of Socialists, their final goal, they mingled with the big crowds which had preferred to take the subway this far.  After passing the many booths with their books, manifestos, petitions, or simply sausages or soup, they walked around the big stone monument with the words “The dead call to us” and placed red carnations there in the snow.  The estimated number, all told, was about 40,000, less than the previous year, due to the weather, but enough to impress greatly the American and Norwegian participants I spoke to.  It was a big crowd who defied snow and ice; the “old faithful” were there as ever, but there were even more young people.

For those in Die Linke, undoubtedly a majority of the main “subway” crowd, it was a crucial for showing their feelings.  The party, which won a big victory in the September elections, has been upset by charges and countercharges involving various leading personalities, made possible by the absence due to illness of the key leader Oskar Lafontaine.  The major media have been busy trying to heat up a quarrel between small but growing party organizations in Western Germany, most of them close to Lafontaine, and party leaders in Eastern Germany, whose support by 20 to 30 percent of the population has made it possible to join coalition governments in Berlin, Brandenburg, with good chances next year for two more.  This strategy is one of the controversial issues involved.  A party meeting on the Monday after the demonstration featured an attempt to sort out the differences, a vital need if the party is to make headway in the May elections in North Rhine/Westphalia, the largest state in Germany in terms of population, and a key in political directions for both the government and the opposition.

The demonstration of 40,000 left-wingers on Sunday, still devoted to the hopes and dreams of Karl and Rosa, should and may perhaps have acted as a signal.  Nearly everyone expects the right-wing central government of Angela Merkel, once the May elections are over, to tear gaping new holes in the raggedy German “social net,” and to expand abroad wherever possible.  Strong opposition by all on the left will then be desperately urgent.