Sales may begin to increase soon if the Federal Reserve extends its program to buy mortgage-backed securities. 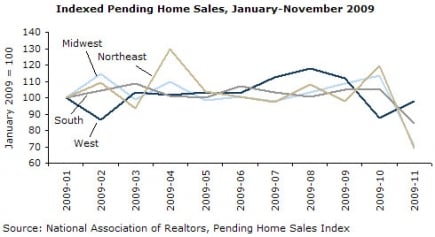 Starts actually dropped 4.0 percent in December.  This was undoubtedly due to unusually severe weather in much of the country.  Starts in the Northeast were down 19.0 percent, while starts in the Midwest were down 18.5 percent.  In the South, which was less affected by the weather, starts increased 3.3 percent.

The increase in starts seems somewhat surprising given the enormous glut of inventories.  This is especially true for multi-family units where the over-supply is leading to a decline in nominal rents for the first time in the post-World War II era.  On the other hand, starts are still at extremely low levels.  The annual rate for permits in December was just 653,000.  This is less than one-third the rate at the peak of the housing bubble in 2005-06.  Given the low rate of building in the last year, it is perhaps not surprising that there would be some uptick, however the enormous inventory of vacant and unsold units makes it extremely unlikely that there will be any sustained uptick in construction.

The recent data on pending and existing home sales are showing substantial divergences across regions.  The homebuyers tax credit appears to have had the greatest impact in the Northeast and Midwest compared with the South and West.  Nationwide, the tax credit drove pending home sales up by 42.2 percent from their trough in January to their peak in October.  In the Northeast, the increase was 73.3 percent over this period, while in the Midwest the rise was 51.9 percent.

It is likely that sales in the West were somewhat less affected by the tax credit because investors may be playing more of a role in buying up houses in former bubble markets in place like Phoenix, Las Vegas, and the central valley in California.

The purchase mortgage applications index was up modestly from the prior week, but it is still down by 19.9 percent from the extremely low levels of January 2009.  This suggests that the demand side of the market is still badly depressed following the rush to take advantage of the first-time buyers credit before its initial expiration date in November.  The extension does not appear to be having much effect thus far.  However, with the deadline for the extension only a bit more than three months away, it is likely that sales will start picking up soon.  Anyone who is considering buying a home in 2010 and qualifies for the credit has a very strong incentive to move up their purchase.  The people who qualify for the credit would now include most potential homebuyers, now that the credit also applies to long-time homeowners.  Of course, applying the credit to current homeowners will have little net impact on the market, since these buyers will also be sellers.  (The new credit, unlike the earlier one, is based on the date the contract is signed, not when the sale is closed.  This means that it will boost contracts until its April 30th expiration date.)

One encouraging sign is that mortgage interest rates continue to remain near 5.0 percent.  With the Fed scheduled to end its program of purchasing mortgage-backed securities at the end of March, it would be expected that interest rates would have already started to rise.  However, the markets may be anticipating an extension of the program, which would be reasonable given the weakness of the economy.

Dean Baker is Co-Director of the Center for Economic and Policy Research, in Washington, D.C.   This article was published by CEPR on 20 January 2010 under a Creative Commons license.