On the 27th of January, all women and men . . . come and break down the wall of oppression!

The mega-march of the Resistance of Francisco Morazán, El Paraíso, Valle, Choluteca, Intibucá, Comayagua, and Olancho will march from the National Pedagogical University to the Plaza Francisco Morazán.

We need everyone to bring large and medium-sized boxes, painted white or covered in white, with the name of a putschist on each.  With these boxes, we’ll build a “Wall of Putschists” (with which they have wished to isolate us from the world, turning Honduras into an island without human rights and dignity, under siege of fear and disinformation, for the white peace of graveyards made by the coup).

Then, the dignified people of Morazán will break down the putschist wall, in a symbolic, peaceful, collective, and creative demonstration of the power of the people and our unstoppable advance toward the re-foundation of Honduras.

The destroyed boxes of the putschist wall will be the symbol of the ruin of the oligarchy.

We shall demonstrate that, after all, we are not another brick in the wall of putschists. 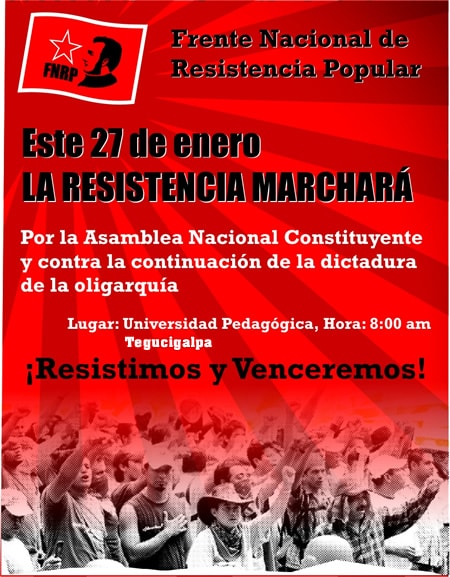