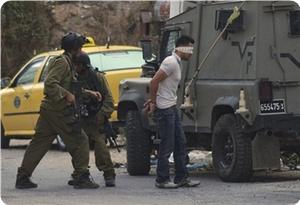 Palestinian Authority security forces arrested a group of comrades in Nablus, on February 25, 2010, as part of their “security cooperation” with the Israeli occupation.  Comrade Khalida Jarrar, member of the Political Bureau of the Popular Front for the Liberation of Palestine, strongly denounced the arrests, saying that this action serves only the interests of the Zionist occupier and demanding the immediate release of the arrested comrades.  Comrade Jarrar demanded a complete prohibition of political arrests and an end to the policy of security cooperation with the occupier and participation in its aggression toward our people.

Comrades Muhammad At-Teriaqi, 17, Muhammad Jihad An-Natur, 18, Omer Tayseer Abdul Haq, 18, and Muhammad Al-Madani, 17 were arrested by the PA forces in the early morning of the 25th in Nablus.  Comrade Jarrar said that “the policy of political arrests is rejected by the Palestinian people,” noting that the security agencies have persisted in ignoring all calls to stop the arrests and persecution of activists.

Comrade Jarrar also noted that this group of arrests comes alongside occupation arrests in the city and throughout the West Bank, targeting the PFLP and other resistance factions, particularly in the face of increased Zionist attacks on the land, Jerusalem, and the holy places of Palestine.

The PFLP issued a statement strongly condemning the arrests, demanding their release and a complete end to security cooperation with the occupation, noting that these activists were arrested at the requests of the occupation forces.  It demanded that all forces in the PLO and PA must end their reliance on the utterly discredited path of “negotiations,” Oslo and the roadmap, saying that this path is destructive to the Palestinian people and cause and ends up only with Palestinian forces acting as agents of the occupation.

For more information, go to <www.pflp.ps>.