The unemployment rate remained at 9.7 percent in February in spite of snowstorms that kept millions of people out of work during the reference week.  The establishment survey showed the economy losing 36,000 jobs with all of the job loss explained by a drop in construction employment of 64,000.  With more normal conditions, it is likely that the economy would have added a small number of jobs in the month.

While it is difficult to determine the impact of the weather, some of the data in the report clearly is positive.  For example, manufacturing showed job growth (just 1.0 percent) for the second consecutive month.  It seems likely that the plunge in manufacturing employment is over, although there is no reason to believe there will be a sharp upturn in hiring any time soon.  The average workweek in manufacturing fell by 0.4 hours, but this was undoubtedly affected by the weather. 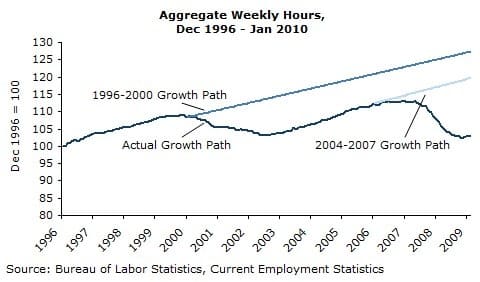 Other data in the household survey is ambiguous.  There was a big jump in both labor force participation and EPOPs for high school graduates in February, but this is a common seasonal pattern (in spite of the seasonal adjustments to the data).  The number of people involuntarily working part-time increased by 458,000, reversing more than half of the sharp drop reported for January.  The percentage of unemployment attributable to workers who voluntarily left their jobs, a measure of confidence in the labor market, fell by 0.4 percentage points to a level near the low for the downturn.  However, all the duration measures of unemployment decreased slightly for the month.

Most of the job loss in construction was probably real and not weather related.  Non-residential construction accounted for the overwhelming majority of the job loss, which is consistent with Commerce Department data showing a sharp drop in this sector.  Publishing lost 7,300 jobs in February, nearly 1.0 percent of total employment.  Health care added just 12,000 jobs, the slowest growth since April 2009.  State and local government employment fell by 25,000 in February.  This rate of job loss is likely to accelerate in future months as state and local deficits force further cutbacks.

Retail employment was virtually flat, losing 400 jobs.  Restaurants reportedly added 400 jobs, while hotels lost 2,700 jobs.  Employment in these sectors was likely affected by the weather, both because these businesses are especially sensitive to weather and also because workers in these industries are more likely to receive weekly paychecks.  (The employment question asks firms about the pay period including the 12th of the month.  If the pay period is shorter, then the weather is more likely to affect total employment.)  The weather also shortened workweeks, with the index for aggregate hours nearing its low-point for the downturn.

In sum, this report is consistent with an economy that would not have lost jobs in the month, had it not been for the weather.  However, there is absolutely no reason to believe that any substantial uptick in employment is imminent.

Dean Baker is the co-director of the Center for Economic and Policy Research (CEPR).  He is the author of False Profits: Recovering from the Bubble Economy.  He also has a blog Beat the Press, where he discusses the media’s coverage of economic issues.  This article was first published by CEPR on 5 March 2010 under a Creative Commons license.