Consumer prices were unchanged in February amidst falling prices for energy.  The CPI has now grown at a 1.4 percent annualized rate over the last three months, while the core rose 0.1 percent in the month.  Falling energy prices appeared in all stages of production.

Medical care prices rose 0.5 percent again in February, and are growing at a 4.8 percent annualized rate over the last three months, compared to 3.6 percent over the previous quarter and 2.7 percent for the three months ending in August of 2009.  The growth in medical costs, though broad, was particularly large in medical commodity prices that rose 0.8 percent in February.

Education prices also rose 0.5 percent in February and have risen at a 5.0 percent rate since November.  Together, medical care and education constitute about one-eighth of the core CPI.

The lack of change in the rate of inflation was driven largely by a 0.5 percent fall in energy prices that largely offset rising medical and education costs.  The February decline in energy prices was the first since last April; energy prices rose 20.3 percent since then. 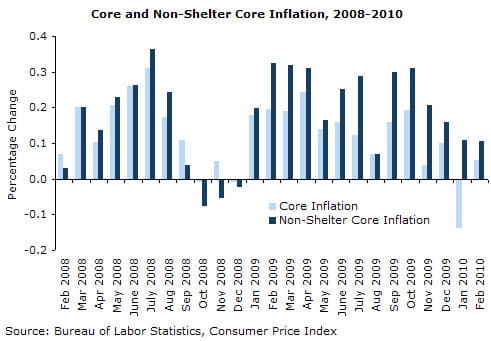 Transportation prices fell 0.1 percent in February, in large measure due to a 1.4 percent fall in gasoline prices.  Used car prices rose 0.7 percent last month — the 9.4 annualized rate of growth was a significant slackening compared to the 18.8 percent rate over the last quarter and 24.3 percent over the last six months.  This may indicate that the tight supply of used vehicles resulting from the cash-for-clunkers program may gradually be relaxing.

A 0.7 percent fall in apparel prices helped slightly to keep prices in check, accounting for 3.7 percent of the CPI.  This was the fourth monthly decline in the last five months for this component, and apparel prices have now fallen at a 1.3 percent annualized rate over the last half-year.

The core finished goods index fell 0.1 percent in the month as February saw significant price reversals in erratic categories of producer prices.  Crude prices remain 28.6 percent above their year-ago level, but a broad fall of 3.5 percent in the price of crude materials, in particular, held down prices after rising 9.6 percent in January.  Crude fuel prices fell 4.7 percent after rising 19.0 percent last month, and non-food non-fuel material prices fell 4.5 percent after a rise of 10.3 percent in January.

Intermediate goods also showed increasing price restraint — rising only 0.1 percent in the month — but this was entirely due to the fall in energy prices.  The price of core intermediate goods rose 0.9 percent in February, as producers at early stages of production pass on the earlier hikes in energy costs.

The February report reinforces several trends discussed previously.  The housing bust has kept core inflation in check, but the persistent rapid price increases in medical expenditures point to the dangers of our broken health-care system.  Failure to control pharmaceutical prices by not reigning in the monopoly-based patent system will result in an ongoing and worsening burden on the elderly and infirm.  Elsewhere, core prices continue to show commodity-price effects rather than a tightening labor market, where the real hourly wage rose only $0.01 cent in the month and is now unchanged since last June.

If commodity prices continue to give back the price gains of previous months and demand for goods and services continues to be weak, we can expect this trend of slowing inflation to continue.  Deflation, rather than inflation, may be likely in the near term.

David Rosnick is an economist at the Center for Economic and Policy Research in Washington, D.C.  He received his Ph.D. in Computer Science from North Carolina State University and his M.A. in Economics from George Washington University.  This article was first published by CEPR on 18 March 2010 under a Creative Commons license.