The standing of Iran’s so-called Green Movement is a deeply serious matter, with potentially profound implications for America’s Iran policy.  Since the Islamic Republic’s June 12, 2009 presidential election, it has become widely accepted among Iran analysts in the United States and the Western political class more broadly that the emergence of the Green Movement in the wake of that election represents a fundamental challenge to Iran’s current political order.

As we have discussed previously, the Obama Administration is increasingly incorporating “support” for the Green Movement as a factor in its policymaking calculations about Iran.  Congress is now becoming engaged with legislative proposals to make “regime change” the explicit goal of America’s Iran policy and to provide material support for Iranian oppositionists — just as Congress and President Clinton enacted the Iraq Liberation Act in 1998, formally defining regime change as the goal of America’s Iraq policy and providing a wide range of material assistance to Iraqi opposition groups.

But, if the Green Movement is not what many Iran analysts and other foreign policy and political pundits have cracked it up to be, adopting such a policy course with regard to Iran would be, to recall Talleyrand’s memorable observation, “worse than a crime”; it would be a “mistake” — a mistake with potentially devastating consequences for the United States and its interests in one of the most strategically vital parts of the world.  We have argued since last June that the Green Movement is not the ascendant political force that its Western champions would have us believe. 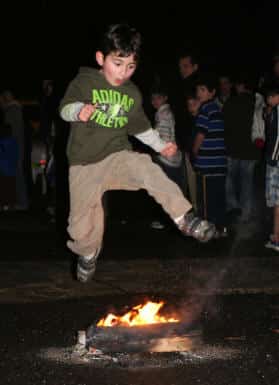 Recent events in Iran provide further evidence for the proposition that the movement, in fact, is fading fast into strategic irrelevance.  March 16 was celebrated in Iran as chahār shanbeh sūri — an ancient Persian festival marking the beginning of preparations for the celebration of Nowruz, the traditional Persian New Year, on March 21.  (Chahār shanbeh means “Wednesday” in Farsi, and sūri means both “festival” and “red”; the celebration of chahār shanbeh sūri takes place on the eve of the last Wednesday of the Persian calendar year.)  Chahār shanbeh sūri, like Nowruz itself, marks not only the turn of the Persian New Year but also the revival of spring.  From time immemorial, Iranians have celebrated the holiday with fire — making bonfires and jumping over them or, in the modern period, shooting off firecrackers.  (Some of our Iranian friends complain about how much money their kids compel them to spend each year on fireworks to celebrate chahār shanbeh sūri.)  Since the Iranian revolution in 1979, there has always been some measure of tension between the Islamic Republic’s religious worldview and the Iranian public’s enthusiasm for observing chahār shanbeh sūri, which is clearly pre-Islamic in its origins.  But, each year, Iranians continue to celebrate chahār shanbeh sūri to mark the beginning of their New Year holidays.  In recent years, some Iranians have gone beyond the limits of the law in their celebrations — just last year, there were reports of younger people burning tires and garbage bins and even tossing Molotov cocktails at police.

Both in Iran and outside the country, Green Movement partisans anticipated that, this year, chahār shanbeh sūri would be an occasion for the movement to show the depth and breadth of its social support and recover from its failure to elicit overt demonstrations of popular support on February 11, the anniversary of the Islamic Republic’s founding.   In the run-up to the February 11 observance this year, Green Movement supporters talked about how the movement would mobilize hundreds of thousands, if not millions, of people in the streets of Tehran, marking the “beginning of the end” of the Islamic Republic.  But February 11 came and went with very small numbers of actual protestors on the streets.  (It was this result which prompted our favorite sentence in Michael Crowley’s recent effort to critique our work on Iran in The New Republic; after summarizing our analysis of Iranian domestic politics since the June 12, 2009 presidential election, Crowley seemed to feel obliged to write: “It’s not obvious that this analysis is wrong — especially in the wake of a disappointing Green turnout . . . on the anniversary of the 1979 Iranian revolution.”)

Iranian contacts tell us that, this year, chahār shanbeh sūri was quieter than usual — almost certainly because, a few days before, Supreme Leader Ayatollah Ali Khamenei issued a public statement reiterating that the holiday had no basis in the Islamic religion and prompted various types of “harm and corruption” that it would be “appropriate” to avoid.  And, once again, a major public commemoration or holiday has taken place in Iran, and the Green Movement has failed to make its presence felt to any significant degree.  According to the Guardian, which had a live blog providing “real time” coverage of events on Tuesday afternoon and evening in Tehran, the Tehran fire department reported 164 “incidents” or calls for “fire service,” some involving homemade fireworks; perhaps a few dozen people were arrested, but without any clear indication that they were arrested for political protest as opposed to apolitical rowdiness.  Even pro-Green Movement journalists like Nazila Fathi of the New York Times had to acknowledge that “given the traditional pyrotechnics of the occasion, [the] number [of people reported injured] was not unusual.”

Still, opposition websites tried to present the participation of thousands of people in these celebrations as a sign of the Green Movement’s “success,” while Nazila Fathi proclaimed from, we presume, Toronto, in a completely unsourced lead that should not have survived responsible editing, that “Iranians defied a ban on events marking a traditional festival on Tuesday, turning an annual celebration into a show of antigovernment sentiment.” One of our Iranian friends compared this to the Green Movement calling on people to drive around Tehran during rush hour and then claiming “victory” because of the traffic.  The Guardian concluded that, all in all, “the opposition must be disappointed not to have witnessed a greater show of strength.”

Clearly, the Green Movement is not, at this point, a social force with any significant potential to impose fundamental change on the Islamic Republic’s political order by operating “outside” that order.  Events on the ground continue to confirm our assessment that the social base for the Green Movement is shrinking, not growing.  Most Iranians, it seems, lead normal lives, focused on their families, jobs, their children’s educations, etc., and are not attracted by the prospect of sustained political and social disruption.  Even those Iranians who want to see the Islamic Republic evolve in ways that Westerners might see as more “liberal” are not hankering for another revolution.

The future course of Iranian politics will be charted within the parameters of the Islamic Republic, not by efforts to overthrow it.  Of course, there are individual political figures and political factions who associated themselves with Mir Hossein Mousavi’s presidential candidacy and, later on, with the Green Movement and who will continue to play roles in Iranian politics.  But these political figures and factions have not helped themselves by their association with the Green Movement.  For reformists, in particular, their performance in the run-up to and the aftermath of the Islamic Republic’s June 12, 2009 presidential election will be an additional burden for them to overcome as they attempt to regain greater salience in Iranian politics.

As we noted earlier this month, after our return from a visit to Tehran, “there is no significant elite challenge to the current political structure.”  Mousavi is increasingly marginalized.  This week, with Nowruz looming, Mousavi could only note on his website that “we have to call the next year the year of patience and endurance until the aims of the Green Movement are achieved.”  But, at this juncture, what, precisely, are those aims, and how do “patience and endurance” constitute a strategy for achieving them?  Former parliament speaker Mehdi Karroubi has even less of a public following than Mousavi.  Former President Khatami has already demonstrated during his career that he does not want to challenge the core constitutional elements of the Islamic Republic’s political order; in recent weeks, he has been largely silent in public.

With regard to former President Ali Akbar Hashemi Rafsanjani, the current head of both the Assembly of Experts and the Expediency Council, we wrote as early as last June that it was foolhardy for Western analysts to hypothesize that he was prepared to challenge fundamentally the authority of Ayatollah Khamenei as the Supreme Leader or lead a behind-the-scenes effort to remove him.  The personal ties of the two men go back too far to permit that, and their political ties have been forged and tested across long periods of great adversity.  That forecast was absolutely on the money; while we were in Tehran late last month, the Assembly of Experts convened for one of its regular, twice-a-year meetings.  In his opening address, Rafsanjani said clearly that “those who care for the revolution must clarify their position vis-à-vis supporters of regime change and opponents of the Supreme Leader, and must regard him as the center of unity” (emphasis added).

This analysis will, no doubt, prove discomfiting, even disturbing for many who read it.  But it is correct, which is the only test that should matter where analytic judgments are concerned.

The record of most Western analysts in interpreting and predicting the course of Iranian politics since the Islamic Republic’s June 12, 2009 presidential election has been, to put it gently, disappointing.  It is also altogether too reminiscent of the analytic failures, wishful thinking, and determination to find a “smoking gun” when one did not exist that fed the U.S. decision to invade Iraq.  To those Western analysts and political pundits who made their personal aspirations for the course of Iran’s political evolution the basis for their analytic judgments, we would respectfully ask, what is your evidence that the Green Movement is not shrinking before our eyes?  What is your evidence that the Green Movement is capable of affecting political outcomes in the Islamic Republic over the next several months or even the next few years in a strategically significant way?

These questions matter, and need to be addressed seriously.  The United States cannot afford more “mistakes” in the Middle East.

Flynt Leverett directs the Iran Project at the New America Foundation, where he is also a Senior Research Fellow.  Additionally, he teaches at Pennsylvania State University’s School of International Affairs.  Hillary Mann Leverett is CEO of Strategic Energy and Global Analysis (STRATEGA), a political risk consultancy.  In September 2010, she will also take up an appointment as Senior Lecturer and Senior Research Fellow at Yale University’s Jackson Institute for Global Affairs.  This article was first published in The Race for Iran on 17 March 2010 under a Creative Commons license.