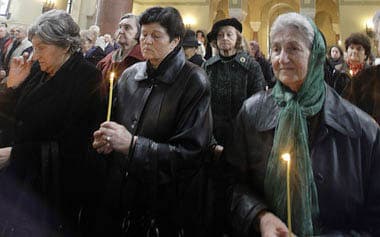 On Wednesday, eleven years after the start of the NATO bombing, Belgrade remembered the victims.  There was mourning in churches (photo), and sirens wailed across the country.  On 24 March 1999, the air war against the Federal Republic of Yugoslavia began.  At first, 430 bombers were deployed.  The number climbed, by the tenth of June, the official end of the war, to a total of 1,200 from 14 NATO member states.  A lot of infrastructure was destroyed.  The casualties ran into thousands.  The German military, too, was involved: at the end of the twentieth century, Belgrade became a target for the third time — after 1915 and 1941.

The original article “Gedenken in Belgrad” was published by junge Welt on 24 March 2010.  Translation by Yoshie Furuhashi (@yoshiefuruhashi | yoshie.furuhashi [at] gmail.com).