Mortgage applications are running below the depressed levels of 2009.

The Case-Shiller index showed house prices continuing to rise at a modest pace in January, with the 20-city index rising by 0.3 percent.  Over the last quarter, the index has risen at a 3.2 percent annual rate.  The index is almost flat over the last year, down by just 0.7 percent.

There are sharp differences in the price movements across the cities in the index.  Eight of the 20 cities showed price declines.  The sharpest drop was in Chicago, where prices fell 0.8 percent.  Prices in Seattle dropped 0.6 percent, while prices in both Atlanta and Portland fell by 0.5 percent.  Over the last three months, prices in Chicago have fallen at an 8.5 percent annual rate.  The annual rate of decline in Seattle over the last three months was 0.7 percent, and in Atlanta, 1.3 percent.  Prices in Portland rose at a 3.0 percent rate.

On the other side, the biggest rises in price were in the West.  Prices in Los Angeles rose by 1.8 percent in January, by 0.9 percent in San Diego, and 0.8 percent in Phoenix.  Over the last three months, prices in these cities have risen at 19.4 percent, 13.2 percent, and 15.0 percent annual rates, respectively. 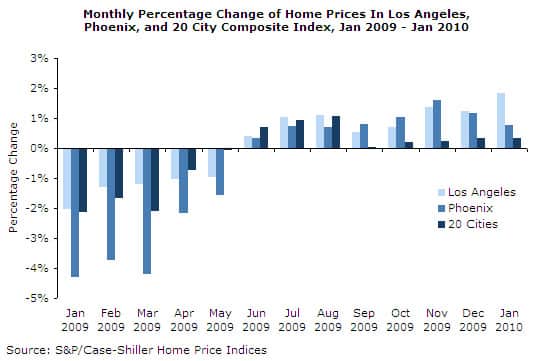 These cities are at very different points in the process of bubble deflation.  Over the last year, prices have fallen by 4.5 percent in Phoenix.  This puts house prices in the area below their February 2002 level.  They are 3.8 percent and 5.9 percent above their year ago level in Los Angeles and San Diego, respectively.  Prices in both cities are down sharply from their bubble peaks, but are still 74.0 percent and 58.9 percent above their levels 10 years earlier.

The purchase mortgage applications index increased by 6.8 percent last week, rising to its highest level since the end of October.  This is likely attributable to efforts to buy homes before the expiration of the extended homebuyers credit at the end of April.  It is remarkable how little activity seems to have been supported by this credit.  Even with last week’s jump, applications were still 9.3 percent below their year ago level.

Dean Baker is the co-director of the Center for Economic and Policy Research (CEPR).  He is the author of False Profits: Recovering from the Bubble Economy.  He also has a blog Beat the Press, where he discusses the media’s coverage of economic issues.  This article was first published by CEPR on 31 March 2010 under a Creative Commons license.