The Census Bureau reported on Monday that the vacancy rate edged up to 11.0 percent of all housing units in the first quarter of 2010, slightly above the year-round average of 10.9 percent for 2009.  The data showed a slight decline of 0.1 percentage points in the vacancy rate for ownership units compared with the first quarter of 2009.  This was more than offset by an increase of 0.5 percentage points in the vacancy rate for rental units.  This indicates that homeowners who are having difficulty selling their units are opting to rent them out instead. 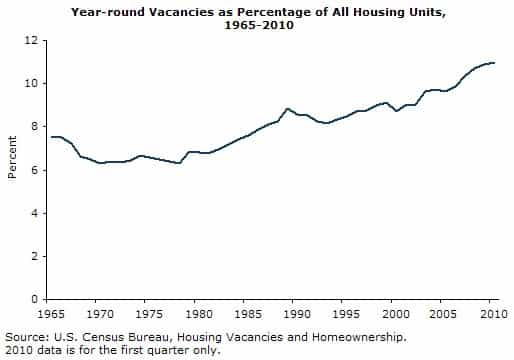 The Case-Shiller 20-City index was unchanged for February (the most recent data available), with 15 cities showing price declines and only 5 showing price increases.  San Diego had the largest increase, with prices rising 0.8 percent in February.  San Francisco had a 0.4 increase, the second largest.  Over the last three months, prices in these cities have risen at an 11.6 percent and 6.9 percent annual rate, respectively.  Prices in Los Angeles have risen at a 14.0 percent annual rate.

While prices have been rising in these cities, houses in the bottom tier of the market continue to experience the sharpest increases.  House prices in this segment rose at an annual rate of 20.1 percent rate over the last three months in San Diego, a 17.9 percent rate in Los Angeles, and a 14.9 percent rate in San Francisco.  This could be explained in part by the California state first-time buyers tax credit.

This pattern of price declines is explained by the end of the first-time buyers tax credit.  In all of these cities, prices of homes in the bottom tier had risen more rapidly than the prices of other homes through the fall.  However, this gap has been reversed since the end of the initial tax credit.  The change in house prices over the last year in each city is close to even across tiers, as the declines since the expiration of the credit have offset the more rapid increases last summer and fall.

The expiration of the extended credit at the end of this month is likely to add downward momentum to house prices.  This will be amplified by the rise in interest rates resulting from the end of the Fed’s purchases of mortgage-backed securities and the smaller role for the FHA.  As a result, price declines will almost certainly accelerate this summer.

Dean Baker is the co-director of the Center for Economic and Policy Research (CEPR).  He is the author of False Profits: Recovering from the Bubble Economy.  He also has a blog Beat the Press, where he discusses the media’s coverage of economic issues.