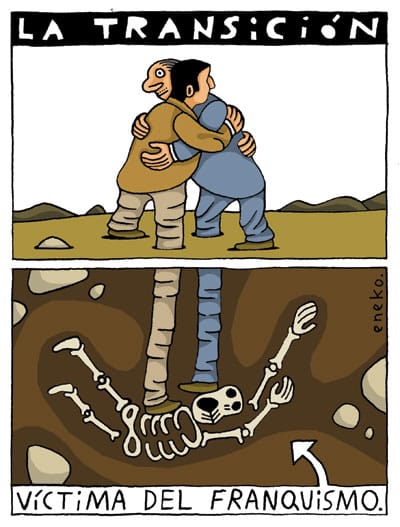 The transition . . . at the expense of victims of Francoism.

Eneko Las Heras, born in Caracas in 1963, is a cartoonist.  This cartoon was published on his blog . . . Y sin embargo se mueve on 9 April 2010.  Spanish judge Baltasar Garzón was indicted, and suspended from his post on 14 May 2010, on the charge — initially brought by the fascist Falange Española, Manos Limpias, and Libertad e Identidad — that his 2008 decision to investigate the crimes against humanity committed by Francoist fascists was “manifestly against the law” given the 1977 law of amnesty.  The number of individuals disappeared by fascists during and after the Spanish civil war is said to be over 100,000.