As of today the idea that Greece might be better off leaving the Euro and renegotiating its debt is considered by many to be unthinkable.  Instead, the country is embarking upon a program of “internal devaluation” — in which it keeps the Euro and lowers its real exchange rate by creating enough unemployment to drive down the country’s wages and prices.

Let’s compare this process to two other countries that have tried it — one which abandoned it after three and a half years — Argentina — and one that is continuing it — Latvia.

First, Greece: Figure 1 shows the IMF’s April 2010 projections for real (inflation-adjusted) GDP.  Note that in 2015, Greece still does not reach its pre-crisis (2008) level of GDP.  However, these projections are already out of date; the current projections from the Greek Finance Ministry show a 4 percent decline for 2010, whereas the IMF’s projections had only shown a 2 percent drop.  Moreover, it will most likely be worse; when Latvia began its “internal devaluation” in 2008, the IMF projected a 5 percent drop in GDP for 2009; it came in at more than 18 percent.  Result: Greece will probably need at least 8 or 9 years, if things go well under the current program, to reach pre-crisis output. 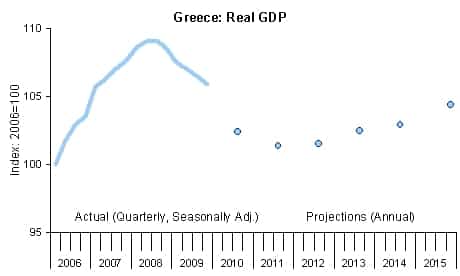 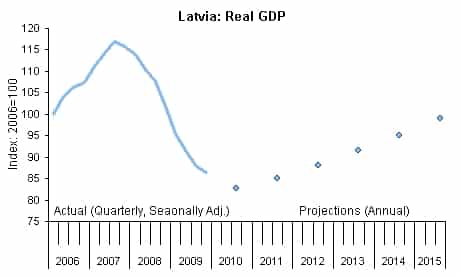 Third, Argentina: Figure 3 shows Argentina’s recession beginning in the middle of 1998.  Argentina tried the “internal devaluation” process — its currency was pegged at 1 to 1 to the dollar — until the end of 2001, leading to an economic and financial collapse.  In December 2001-January 2002, the government defaulted on its debt and abandoned the fixed exchange rate.  Result: after the default/devaluation, the economy continued to shrink for just one quarter (first quarter 2002).  It then grew and passed up its pre-crisis peak within three years of the default and devaluation, with real (inflation-adjusted) growth of 63 percent over 6 years. 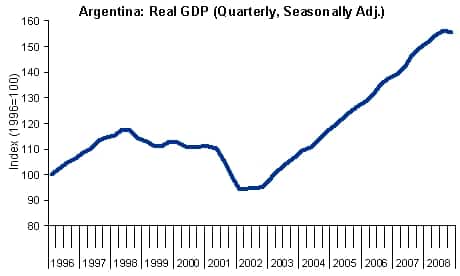 Conclusion: before making a commitment to indefinite recession and slow recovery, including many years of high unemployment and other social costs, Greece may want to consider the alternatives.  They may be less painful and allow for a speedier, more robust economic recovery.

Mark Weisbrot is co-director of the Center for Economic and Policy Research, in Washington, D.C.  He received his Ph.D. in economics from the University of Michigan.  He has written numerous research papers on economic policy, especially on Latin America and international economic policy.  He is also co-author, with Dean Baker, of Social Security: The Phony Crisis (University of Chicago Press, 2000) and president of Just Foreign Policy.  This article was first published in the Guardian on 18 May 2010 and republished by CEPR under a Creative Commons license.