The Case-Shiller 20-City index showed a decline for the sixth consecutive month in March, as 13 of the 20 cities reported a drop in prices.  The drop in the seasonally unadjusted index was 0.5 percent, bringing the annual rate of decline over the last quarter to 6.8 percent.  (The unadjusted index is preferred in the current market due to the high percentage of real estate owned (REO) sales, which do not follow normal seasonal patterns.) 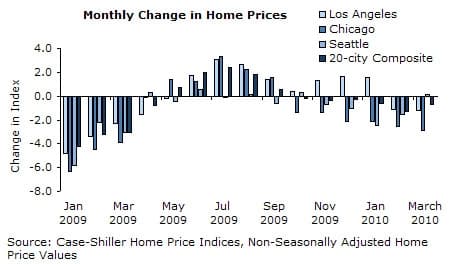 Most of the sharpest declines were in Midwest cities, with prices in Detroit falling 4.1 percent; Minneapolis, 2.7 percent; and Chicago, 2.3 percent.  Over the last quarter, prices in these cities have fallen at a 24.4 percent, 20.7 percent, and 21.7 percent annual rate, respectively.  While the price decline in Detroit is clearly the result of the weakness of its economy, the declines in the other two cities are the result of over-building during the housing boom.

The big gainers for the month were San Diego and San Francisco, both of which had 1.5 percent price increases.  Prices in these two cities have risen at a 10.4 percent and 1.0 percent annual rate over the last quarter.  Prices in Cleveland showed a sharp 1.8 percent rise, but the sample size in the city is small and therefore the monthly movements are erratic.

Weakness in the bottom tier may also reflect a cutback in HUD’s role in the market.  It had guaranteed almost 30 percent of purchase mortgages in 2009.  As a result of large losses, it was forced to tighten up its lending standards.  Undoubtedly many of the people prevented from getting HUD mortgages will not be able to find other sources of financing.

The price rises in the two California markets (prices in Los Angeles dropped 0.8 percent and have fallen at a 1.8 percent over the quarter) may partially reflect the impact of a California state tax credit.  While this credit runs until March of 2011, it is inadequately funded and will be exhausted during the summer.

It is likely that the price declines of recent months will continue to accelerate as the effect of the extension of the credit disappears.  There could be some turnaround in the April and May data as people struggled to close purchases before the expiration, but this will almost certainly be reversed in subsequent months.  It is also worth noting that there was a large jump in the inventory of unsold homes in April.  This suggests that many homeowners who may have been waiting for the market to turn have placed their home on the market.  This will further depress prices in the months ahead.

Dean Baker is the co-director of the Center for Economic and Policy Research (CEPR).  He is the author of False Profits: Recovering from the Bubble Economy.  He also has a blog Beat the Press, where he discusses the media’s coverage of economic issues.  This article was published by CEPR on 25 May 2010 under a Creative Commons license.