The Cato Institute wishes to erase away an entire recession: “You never heard of it because it never happened.  However, the ‘Depression of 1946’ may be one of the most widely predicted events that never happened in American history.”  But the facts are simply not on their side.

If true, this would have been a truly heroic feat on the part of the private sector, given that government spending fell by $56 billion dollars from 1944 to 1947.  GDP was just over $200 billion in 1944.  Today such a cut would be equivalent to $3.4 trillion, or 132 percent of government expenditures.

While the private sector did pick up much of the slack, the downturn from 1945 to 1946 alone was far more severe than the current recession.

Employment figures show a similar story.  From 1945 to 1946, combined employment in nonfarm payrolls (the standard measure of employment at the Bureau of Labor Statistics) and the armed forces fell by 6.7 million, or 13.0 percent.  By comparison, from the peak in December of 2008 to the trough in December of 2009, nonfarm payrolls fell 6.1 percent while the number of active-duty military personnel increased slightly. 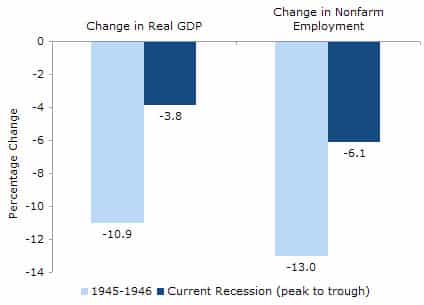 Cato is entitled to argue that the private sector did a fair job of picking up where the government left off.  However, it is wholly illegitimate for the Institute to pretend that the largest economic downturn since the Great Depression “never happened.”

David Rosnick is an economist at the Center for Economic and Policy Research in Washington, DC.  This article was first published in the CEPR blog on 2 June 2010 under a Creative Commons license.