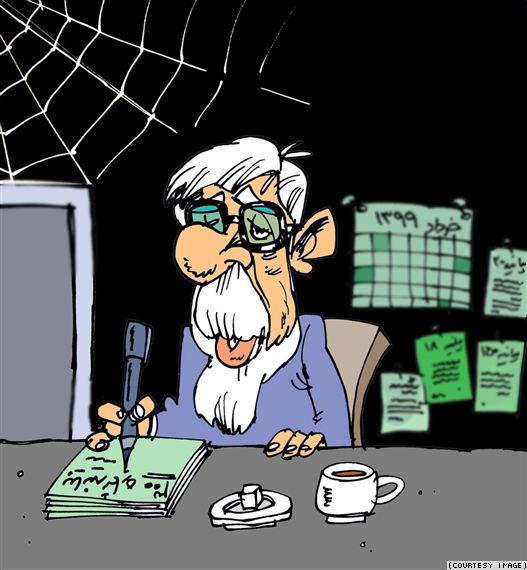 Golnaz Esfandiari of Radio Free Europe/Radio Liberty writes that “Kowsar . . . a contributor to Rooz, confirmed the removal of his cartoon, but did not want to comment on the reasons behind the move.  Rooz did not respond to RFE/RL’s emails seeking explanation.”

Rooz Online is funded by Hivos, an organization whose “largest financier . . . is the Dutch Ministry of Foreign Affairs.”  And every thinking person knows what RFE/RL was and is.  (The United States and the Netherlands are the two countries most dedicated to regime change in Iran; the existence — if not all the contents — of US attempts at destabilization, supporting all manner of organizations from the terrorist MEK/MKO/PMOI, Jundallah, and PJAK to civil society organizations, is relatively well known; that of the latter’s is little known outside the Netherlands.)  As for Nikahang Kowsar, his most recent public appearance was to be one of the presenters at the National Endowment for Democracy conference honoring the “Green Movement” with the “NED 2010 Democracy Award.”

There was always a great deal of difference of opinion in the ideologically incoherent pro-Green camp of the West about what exactly to think about Mousavi’s leadership: to take just one example, ultra-leftists (finding too much bourgeois Islamic republicanism in it) and ultra-rightists (not finding any love for the state of Israel or hatred for Iran’s nuclear program in it) were always skeptical about it; much of the rest found one reason or another in it to “keep hope alive.”  That difference of opinion (grown since Mousavi’s post-Ashura clarification and moderation) is now more out in the open, as the one-year anniversary of Iran’s tenth presidential election has quietly come and gone.  The Mousavi cartoon affair, reflected in an intra-imperialist difference between Rooz and RFL/RL in this case, is indicative of that.

Such a difference of opinion among the Greens in the Iranian diaspora and their supporters spanning the political gamut in the end matters little to the highest echelons of power in the West.  Shortly before the cartoon affair came to light, the UK Guardian published Geoffrey Robertson’s opinion calling for the United Nations to try Mousavi and Akbar Hashemi Rafsanjani among other then high-ranking Iranian officials as “murderers” responsible for the mass executions of 1988.  That would have been a prevalent Western propaganda line had Mousavi been elected.

In the last analysis, the West’s aims and strategy toward Iran, if not precise tactics and rhetoric, will remain the same.  All possible steps will be taken to divide and weaken the leadership, including supporting one faction against another.  However, short of a level of strategic compliance such as that shown by the last Shah, any government of Iran will face the same imperialist pressures.