The Consumer Price Index fell 0.1 percent in June.  This is the third consecutive month of deflation in the broad measure of prices as energy prices continue to fall.  The core index of inflation rose 0.2 percent in the month for the first time in nine months.

Energy prices had increased nearly 20 percent over 2009, but nearly half of that run-up has been erased since January, as energy prices have dropped at a 17.4 percent annualized rate since the beginning of the year.

Housing prices fell 0.1 percent in June, largely due to the lower price of household energy.  Nevertheless, rent and Owners’ Equivalent Rent (OER) of primary residences continue to show considerable price restraint, each ticking up 0.1 percent in the month. 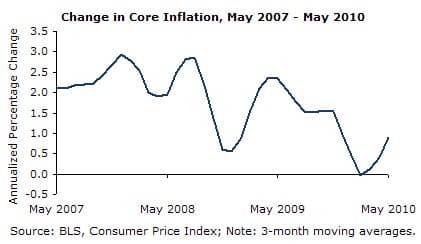 Elsewhere in core prices, the picture is mixed.  Apparel prices, which tend to be volatile, rose 0.8 percent in June and, having fallen 0.7 percent from March to April, are rising at a 1.3 percent annualized rate over the last three months, compared to -4.5 percent over the three months prior.

Medical care prices increased 0.3 percent in June, as hospital services jumped 0.6 percent in the month.  The price of hospital services have grown at a 5.5 percent annualized rate over the last three months and 8.0 percent over the last six.  By comparison, the prices of medical care commodities have grown at a 1.1 percent rate since March and a 4.4 percent rate since December.

The price of used cars and trucks accelerated again in June — the 0.9 percent jump contributed to a 6.6 percent annualized rate over the last three months.  This rate, while still high, is well below the 11.4 and 32.5 percent annualized rates from December to March and September to December, respectively.  It is not clear whether the post-Cash-for-Clunkers disinflation in the used-car market is at an end.

Data at earlier stages of production are consistent with ongoing deflation.  The intermediate core index of prices fell 0.4 percent in June — the first fall since last May.  The rate of inflation in intermediate core goods continues to fall and now stands at a 3.8 percent annualized rate since March, compared to 8.7 percent the three months prior.

Despite inflation in several categories of consumer goods, inflation continues to be quite low, even excluding the recent fall in energy prices.  With the housing market continuing to unwind, deflation in import and early-stage production indicate weak price pressure in consumer prices.

David Rosnick is an economist at the Center for Economic and Policy Research in Washington, DC.  This article was published by CEPR on 16 July 2010 under a Creative Commons license.