Amid spells of heavy monsoon rain and sticky, sweltering heat, Delhi is an anxious city, struggling to meet a deadline.  Preparations are furiously underway for the nineteenth Commonwealth Games, to be held in town in less than three months (from October 3-14).  Delhi residents expect that their upturned streets, recurrent blackouts and impassable traffic jams will soon give way to something spectacular.  On the horizon, or so they are told, is the transformation of India’s congested national capital into a ‘world class city’ — a gleaming global metropolis worthy not only of hosting this prestigious sporting event, but of India’s emerging status as the next Asian superpower. 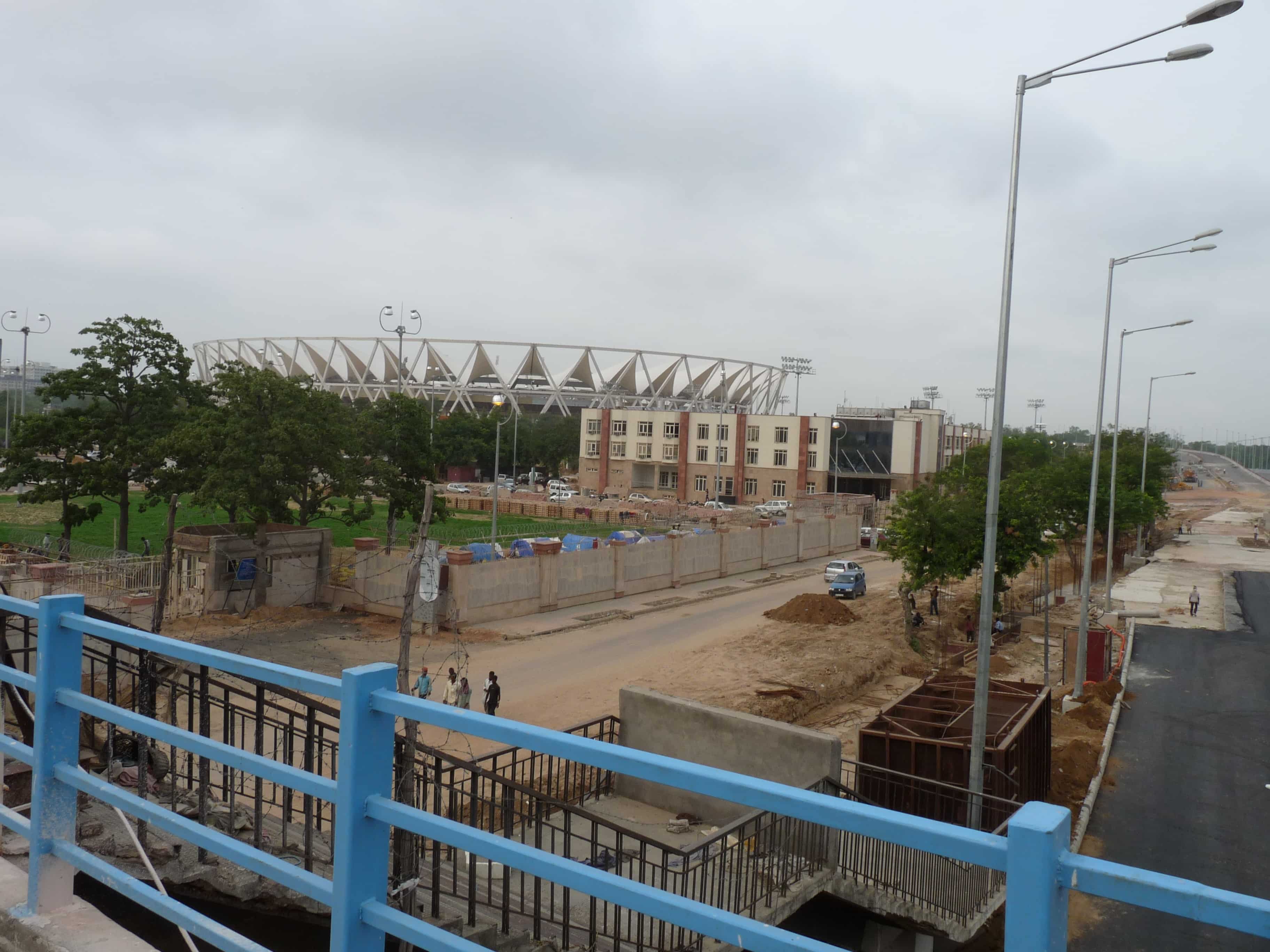 The purveyors of this sweet but tenuous dream, which is still buried beneath layers of scaffolding and rubble, would rather not be reminded that 77 percent of the India’s population live on less than INR 20 (USD 50 cents) a day, and that more than half the country is engulfed by deadly insurgencies.  Their attention is transfixed on the urgency of completing Delhi’s magnificent renovation.  Among the changes specific to the Games is an extravagant overhaul of existing sports arenas, such as the Jawaharlal Nehru Stadium, and the construction, from scratch, of a ‘Games Village’ on the Eastern Bank of the Yamuna, a strip of land that environmentalists have deemed ecologically fragile (the Supreme Court overruled their objections and permitted construction).  The potential damage to the riverbed and the unceremonious eviction of tens of thousands of squatters are outweighed, it seems, by the promise that this elite residential complex shall be “the best Games village in the world, perhaps better than the Olympic village at Beijing.”  Other ‘world class’ facilities to be paraded at the event include a new tennis venue, a wrestling stadium, and a ‘big-bore’ shooting range (these shall later be turned into profit-making ventures and managed by private companies).

During the Games, moreover, Delhi’s security level will begin to reflect its newly minted status as ‘world class city.’  The Home Ministry, Ministry of Sports and Delhi Police have cobbled together a high-testosterone security plan that includes vehicle checkpoints and increased patrolling of the city, in addition to food tasters, helicopter surveillance and snipers to protect athletes.  The main stadium will be protected by a 14-foot fence, close-circuit camera surveillance and a heavy presence of armed guards.  Crack members of the British Metropolitan Police, popularly known as Scotland Yard, are reportedly working with Delhi Police to secure the Games.  To enhance security and disciplined driving, furthermore, the city will install an “intelligent traffic management system” worth INR 200 crore (USD 45 million).  Home Minister P. Chidambaram has already cautioned Delhiites to change their “behavioral pattern,” and adopt manners befitting of residents of “an international city.”  No doubt, their gratitude will also be expected when they are scanned, probed and frisked in order to keep an assortment of ‘terrorists’ at bay. 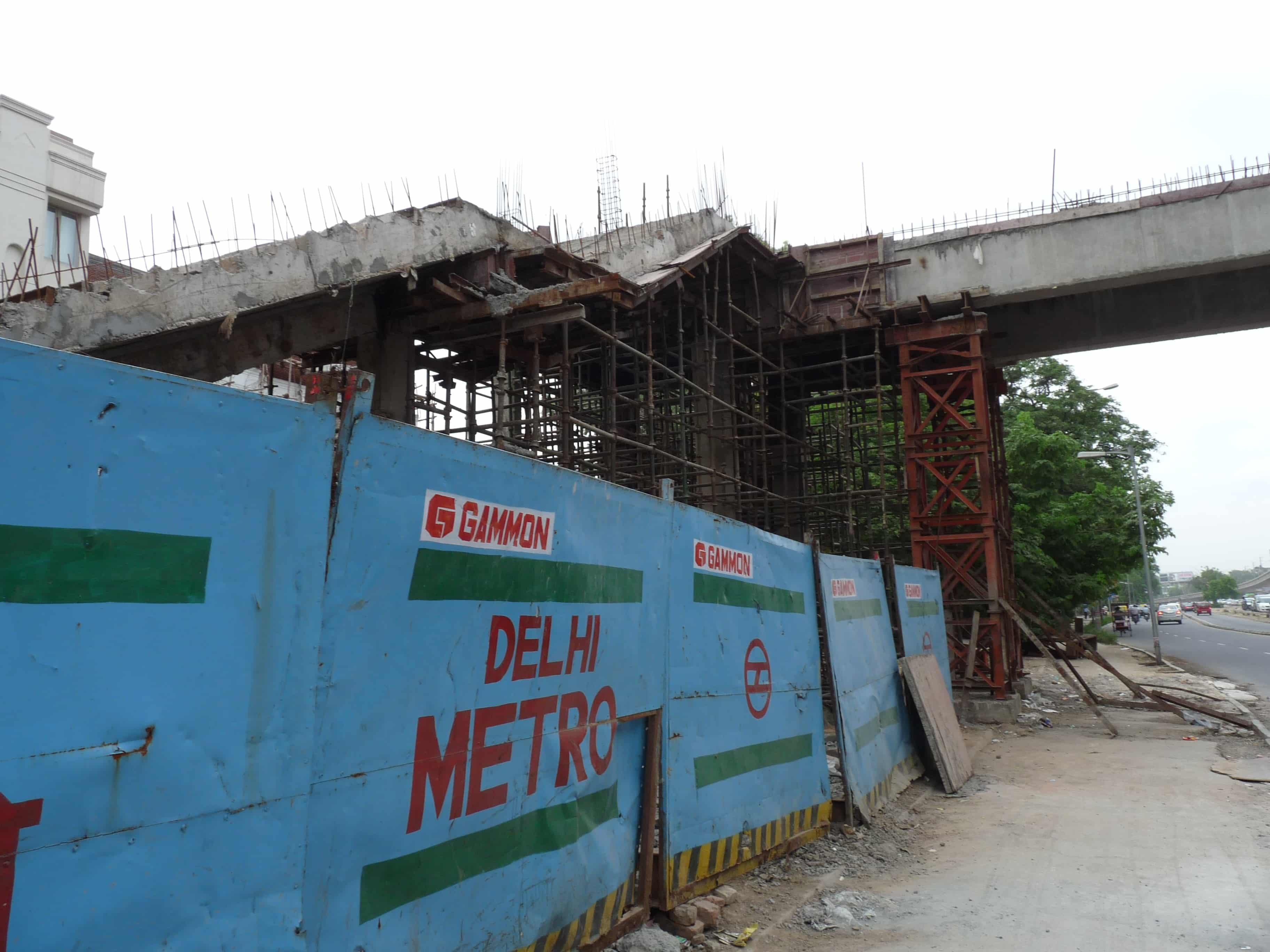 Delhi will also get wider roads, an expanded subway network, and a brand new airport terminal with an annual capacity of 34 million passengers.  Given that Delhi’s population is expected to rise to 23 million by 2021, such projects may be viewed as reasonable, though they will not necessarily benefit the poor, even if the money does go where it should.  More difficult to defend, perhaps, are the final touches to the city’s ‘beautification,’ which include freshly painted street signs, air-conditioned buses, bamboo screens to hide slums, and improved lighting and landscaping for the posh residential colonies that surround the CWG’s principal sites.

This planned transformation bears a hefty price tag.  The budget for the CWG has ballooned from an initial projection of INR 1,899 crore (USD 440 million) in 2003 to an official figure of INR 11,000 crore (USD 2.5 billion), an estimate that excludes the cost of non-sports-related infrastructure development, such as the broadening of roads and the extension of Delhi Metro, which is to be shouldered by the Delhi Government.  Indeed, according to a landmark report by the Housing and Land Rights Network (HLRN) — an arm of the global movement, Habitat International Coalition — the total expenditure on infrastructure, beautification projects and security is unknown, but is likely to be in the “hundreds of crores.”

Arguing that such outrageous spending on a twelve-day “mega event” is “hard to justify in a country that has glaringly high levels of poverty, hunger, inequality, homelessness and malnutrition,” the HLRN report condemns India’s decision to bid for the CWG as “non-transparent and undemocratic.”  It suggests that “the expenses for the CWG are likely to create a negative financial legacy for the nation, the effects of which are already visible in the form of higher cost of living and taxes for Delhi residents.”  Beyond this financial concern, however, are the potentially disastrous social, environmental and political consequences of the event.

A Right to Information (RTI) application filed for the HLRN study has uncovered a deluge of worrying information.  Funds reserved for helping marginalized communities (under the Scheduled Caste Sub Plan, 2009-2010) were allegedly diverted to cover expenditures related to the CWG.  Over 100,000 families have already been evicted in order to make space for CWG-related projects, and a further 30,000 to 40,000 are on the cusp of being displaced and ‘relocated’ (in other words, shunted off to the outskirts of the city, where they face grueling commutes to work and disrupted schooling for their children).  The HLRN also reports that ‘beggars’ and homeless citizens are being arrested and arbitrarily detained under the Bombay Prevention of Begging Act 1959, an archaic piece of legislation that was imported to Delhi in 1960.

Groups such as the Peoples’ Union for Democratic Rights and the Commonwealth Games Citizens for Workers, Women and Children have also drawn attention to the use of child labor at CWG construction sites, and many barefaced labor violations.  As a consequence of the construction boom sparked by the CWG, an estimated one million migrant workers have poured into Delhi from neighboring areas in Bihar, Rajasthan and Uttar Pradesh, which are among the poorest in the country, if not the world.  Most work without proper documentation under the watch of exploitative labor contractors who typically pay them far less than Delhi’s minimum wage of INR 152 (USD 3) per 8 hours work.  Union organizers I spoke with said that these impoverished and malnourished migrant workers typically bear 14-hour shifts and 80-hour weeks, along with sleepless nights in squalid, makeshift roadside camps that lack even the most basic amenities.  On-site injuries and deaths have also been reported.

The point that must be underscored, however, is that none of this is surprising.  The arrogant and immoral misallocation of resources that has defined the CWG is by no means a unique moment.  Scholars such as Partha Chatterjee, Leela Fernandes and Christiane Brosius have studied the rise of politically aggressive ‘citizens groups,’ drawn mainly from the country’s new managerial and technocratic classes, who have launched sustained campaigns to ‘clean up’ cities such as Delhi, Mumbai and Kolkata of ‘encroachers’ and ‘polluters’ (slumdwellers have been consistently targeted).  For those that idealize India as an affluent and influential powerhouse, the desire to be ‘world class’ is potent indeed.

City officials, along with the judiciary, have generally supported such demands for a predictable and ‘safe’ bourgeois utopia, and have often framed their decisions in the language of a ‘public need’ for sanitation, security and environmental protection.  The ‘beautification’ of promenades, parks, beaches and waterfronts is typically undertaken, furthermore, with financial support from the corporate sector, with private security firms awarded contracts for the surveillance of freshly ‘cleaned up’ public spaces.  Private firms have also won contracts to repackage various sprawling slums — often on prime commercial land — into neatly stacked high-rises (a small proportion of the slums’ inhabitants are awarded cramped apartments in the new buildings).  The dynamics in play may be thought of as a form of enclosure, or what David Harvey terms ‘accumulation by dispossession,’ a process through which assets of the state or community are discharged into the market, prying open new vistas for capitalist development.

The CWG are thus but one manifestation of a type of inequitable transformation that is well underway in Delhi and other Indian cities — a shift hinging on the privatization and securitization of public assets, and driven by the fascistic vision of a small, globally connected, but locally detached, elite.  As we’ll most likely see come October, however, such transformations in India shall always be brittle and incomplete.  As Engels observed, in The Housing Question (cited in Harvey‘s Right to the City), “the result is always the same; the scandalous alleys and lanes disappear to the accompaniment of lavish self-praise from the bourgeoisie . . . but they appear again immediately somewhere else. . . .  The same economic necessity which produced them in the first place, produces them in the next.”

Mitu Sengupta is Assistant Professor in the Department of Politics and Public Administration at Ryerson University.  Her academic publications include: (Forthcoming) “Making the State Change Its Mind: The IMF, the World Bank, and the Politics of India’s Market Reforms,” New Political Economy 14:4 (June 2009) and “Labour Power and India’s Market Reforms: The Politics of Decline and the Politics of Survival,” Indian Journal of Labour Economics 51:4 (October-December 2008).  She has also published in India’s Economic and Political Weekly and Frontline, as well as CounterPunch, AlterNet, and The Toronto Star.  See, also, Patrick Bond, “South Africa’s Bubble Meets Boiling Urban Social Protest” (Monthly Review, June 2010).