Over the last three decades the Congressional Budget Office (CBO) has built up a reputation for solid impartial analysis of economic and policy issues.  While the party controlling Congress gets to select the head of the agency, both parties have generally turned to the CBO’s respected academics who did not attempt to use the agency to push a political agenda.

However, this is not the case with the projections referenced in most recent policy discussions.  CBO changed its modeling of the impact of deficits and debt on the crowding out of private investment.  As a result, the 2010 projections show that deficits in the near future will crowd out far more investment than the 2009 projections.  This leads deficits to have a far more negative impact on GNP growth.1

Figure 1 shows the projected crowding out in CBO’s “alternative scenario” for 2009 and 2010 relative to a scenario in which the ratio of debt to GDP remains constant.2

The alternative scenario is constructed by making unfavorable assumptions about health care cost growth, revenue collection, and other factors that will increase the size of the deficit.  It is supposed to be a worst plausible case scenario.

Figure 1 shows that the deficits in the alternative scenario will lead to a rapid drop in GNP relative to a scenario where the debt-to-GDP ratio held constant in the very near future.  The projections show that GNP will be 6.9 percent lower than in the constant debt-to-GDP scenario by 2020.  GNP is projected to be 16.6 percent lower by 2027.  In a footnote to the 2010 projections, CBO reports that it is unable to make projections for years beyond 2027 because the implications are not realistic. 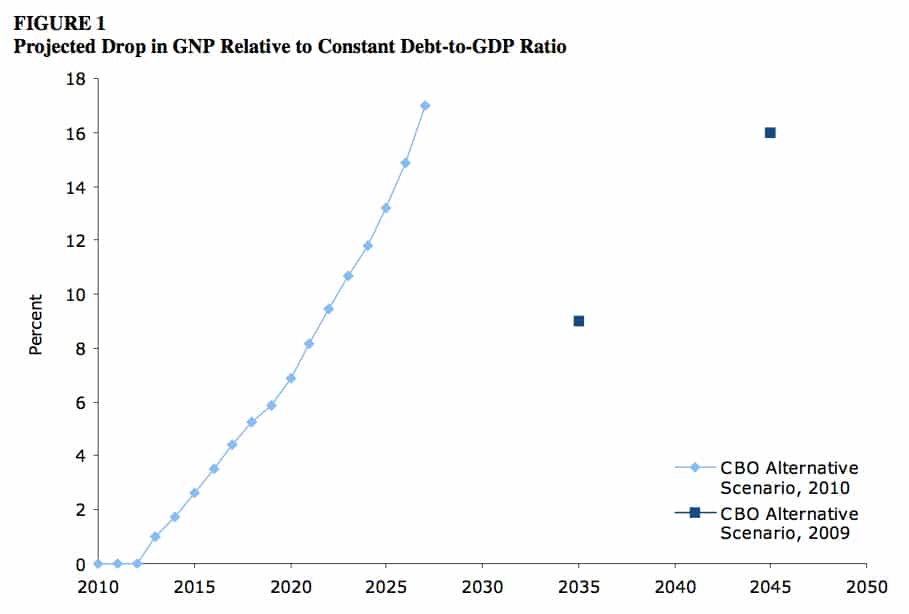 By contrast, the 2009 projections suggest a much more modest level of crowding out.  The text just presents two data points.  It reports that under the alternative scenario, in 2035 GNP will be approximately 9 percent lower than if the debt to GDP ratio had not risen.  It reports that GNP will be 16 percent lower in 2045 compared to a scenario where the debt to GDP ratio had not risen.  In the 2009 projections, it is only for years after 2045 that the implied reductions in GNP are not deemed to be realistic.

The much more rapid fall in GNP is not attributable to more pessimistic deficit assumptions.  While the 2010 projections for the alternative scenario are slightly more pessimistic than the 2009 projections, there is relatively little difference in the rate at which the debt accumulates over the next 20 years as shown in Figure 2.

This means that the much greater rate of crowding out shown in the 2010 projections is attributable to a change in methodology, not a change in projections.

It turns out that this is in fact the case.  CBO adopted a methodology in its most recent projections where it assumed that the full crowding out effect of the deficits is felt on domestic investment, with none of it offset by an inflow of foreign capital.  This model effectively assumes that the United States is a closed economy, unable to borrow in international capital markets and unable to run a trade deficit.  As a result, a dollar increase in the deficit is assumed to lead to a reduction in domestic investment of 60 cents, roughly twice the extent of crowding out in the model used in the 2009 projections.3 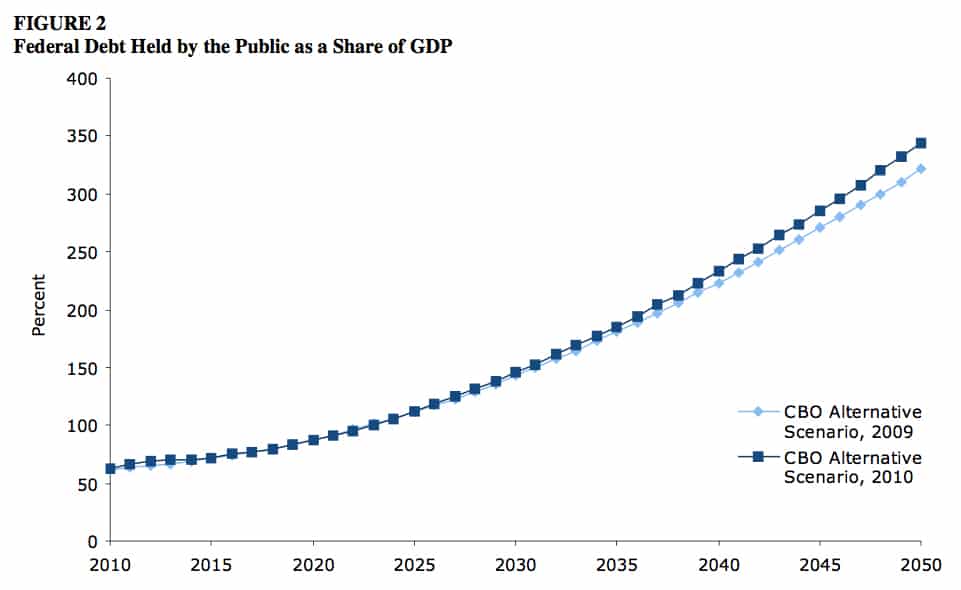 There is nothing wrong with CBO changing its model; there is no universally agreed upon model to apply to these sorts of projections.  However, it is unusual that it would change its model without any clear explanation of the change, especially when it adopted a model that is so clearly out of line with reality — obviously the United States can and does borrow massively in international financial markets.  If CBO opts to use a highly stylized model that departs sharply from reality (and from other economic models), the normal practice would be to highlight this departure rather than conceal it.

With Congress being called upon to make major decisions on the future of the government’s most important social programs, it is essential that it be given reliable information and projections.  It is not clear that CBO’s latest long-term budget projections fit this definition.

1  It is important to note that the CBO analysis refers to GNP rather than GDP.  The difference is net income from foreign sources.  If the U.S. derives more income (mostly profits, dividends and interest) from abroad than it pays to foreigners, then GNP will be larger than GDP.  If it pays more income to foreigners than U.S. nationals receive, then GDP will be larger than GNP.  Historically, they have been very close in the United States.

2  The focus is on the alternative scenario because the increase in the ratio of debt to GDP is very modest in the baseline scenario, and therefore the impact of crowding out is very modest for the foreseeable future.  However, CBO has used the same model to project crowding out in the baseline scenario as in the alternative scenario.  The 2010 data are taken directly from the CBO projections (“The Long Term Budget Outlook,” June 2010, Figure 1-5, www.cbo.gov/doc.cfm?index=11579&type=2); the data points for 2009 are described in the text (“The Long Term Budget Outlook,” June 2009, p. 19, cbo.gov/ftpdocs/102xx/doc10297/06-25-LTBO.pdf).

3  CBO macroeconomic analyst, “RE: Modeling of crowding out in CBO’s long-term budget outlook,” email message to CEPR economist (July 13, 2010).  The crowding out of domestic investment has a much larger impact on GNP because the return on investment is far higher than the payments made for foreign capital that comes into the United States.  While the pre-tax return on domestic investment would average close to 10 percent, foreigners have been willing to lend the U.S. government money at a near zero real interest rate.

Dean Baker is the co-director of the Center for Economic and Policy Research (CEPR).  He is the author of False Profits: Recovering from the Bubble Economy.  He also has a blog Beat the Press, where he discusses the media’s coverage of economic issues.  This article was first published by the CEPR in July 2010 under a Creative Commons license.