Gross Domestic Product grew at a 2.4 percent annualized rate in the second quarter of 2010.  Final demand from domestic sources contributed 4.12 percentage points to GDP — the largest quarterly contribution to growth since 2003. 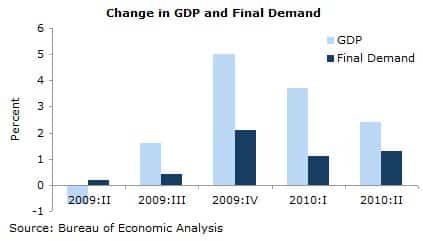 The largest contributor to final domestic demand came in fixed investment, which grew at a 19.1 percent annualized rate since the first quarter.  Outside of nonresidential structures, the growth in investment was broadly-based.  Equipment and software grew at a 21.9 percent annualized rate — the third straight quarter of double-digit growth in that category of investment — adding 1.36 percentage points to GDP growth.

Residential investment contributed a little more than one quarter of the growth in fixed investment.  This increase is likely driven by a surge in home sales as households raced to claim expiring tax credits.  The fees on sales of existing homes are included in this spending category, so the 27.9 percent annualized growth in residential investment is surely masking much weaker construction activity.

This is not the first time since the collapse of the housing bubble that home construction has contributed to GDP growth.  In the advance estimates of GDP for the third quarter of 2009, residential investment was reported as growing 23.4 percent — only to be revised down to a more modest 10.6 percent and resuming its fall over the next two quarters.  It would be surprising if such growth could be sustained for long, given the recent deflation in the price of housing.

The remaining 1.05 percentage points of growth came in the form of continued inventory accumulation.  Changes in private inventories accounted for more than half of GDP growth in the previous three quarters, and nearly any downward revision to final demand for the second quarter would bring the total to four consecutive quarters.

It should be noted that this report included substantial revisions to data over the last few years.  In particular, the rate of GDP growth is now reported as more even over 2009, with higher (less negative) growth in the first quarter and less growth in the third and fourth quarters.  Consequently, we can expect the productivity numbers for the latter quarters to be revised downward by about 0.6 percentage points.

Though there are hopeful signs in this report, many serious weaknesses remain.  Inventory accumulation continues to be a significant driver of economic growth — a cycle that must end soon.  Increased fixed investment is welcome from the standpoint of domestic demand, but with a glut of real estate and capacity utilization at only 72 percent as of February, it is unclear what benefit it may serve.  Furthermore, if the increased investment is derived primarily from imports, a virtuous cycle of growth is unlikely to result.  Finally, as the government stimulus spending peaks and the additional spending on the census winds down, it is unclear that there are sustainable sources of growth in the economy.

David Rosnick is an economist at the Center for Economic and Policy Research in Washington, DC.  This article was first published by CEPR on 30 July 2010 under a Creative Commons license.