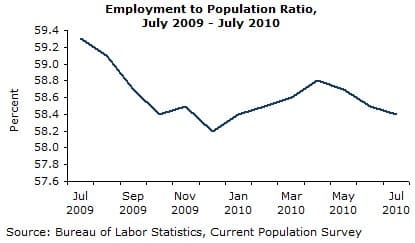 There were substantial declines in all the measures of duration of unemployment.  This likely reflects many long-term unemployed dropping out of the workforce after losing benefits.  The percent of multiple jobholders dropped by 0.3 percentage points to the lowest on record.  This presumably reflects difficulty in getting jobs.

There are very few obvious sources of job growth on the establishment side.  Manufacturing added 36,000 jobs, but most of this increase was attributable to a 20,500 rise in jobs in the auto industry and a 9,100 increase in jobs in fabricated metals.  Most of these rises are attributable to the fact that Detroit auto makers did not shut down in July to change models.  The underlying rate of job growth in manufacturing is very weak, even if at all positive.

Retail trade added 6,700 jobs, but with a 13,000 downward revision to last month’s job loss number, employment is still 14,000 below the May level.  Financial services lost 17,000 jobs, with real estate counting for more than half of the loss.  Professional and business services are now shedding jobs, with the sector losing 13,000 jobs last month.  Employment services lost 23,300 jobs, a bad harbinger for future job growth.  Even the restaurant sector is losing jobs, shedding 10,600 workers in July, the 3rd consecutive decline.

State and local governments shed 48,000 jobs in July, a result of budget cutting coinciding with the new fiscal year.  The only sectors that added substantial numbers of jobs were health care (27,800) and, strangely, ground transit which added 10,600 jobs in July, 2.5 percent of employment in the sector.

There was a small uptick in average hours (all in the goods-producing sector), but this just returned hours to the May level.  There is zero evidence to support the claim that firms are reluctant to hire because of uncertainty, since this would imply that they were increasing hours.  Nominal wages rose at just a 1.4 percent annual rate, also not a good sign.

With the end of the inventory cycle, a huge wave of state and local cutbacks, and further declines in house prices on the way, the situation looks bleak for the second half of 2010.

Dean Baker is the co-director of the Center for Economic and Policy Research (CEPR).  He is the author of False Profits: Recovering from the Bubble Economy.  He also has a blog Beat the Press, where he discusses the media’s coverage of economic issues.  This article was first published by CEPR on 6 August 2010 under a Creative Commons license.