David Leonhardt tells readers that the Great Recession has had some silver linings for many workers.  High on his list is continued wage growth.  This is misleading.  All the real wage growth in this downturn occurred in the months of November and December of 2008.  This was due to a plunge in the price of oil and other commodities.  Since December of 2008 real wages have stagnated.

The wage growth in those two months also followed 6 years of wage stagnation.  Essentially, nominal wage growth was eaten up by rising commodity prices during the upturn.  These gains were then realized when prices crashed, but it is misleading to imply a pattern of consistent wage growth during the downturn. 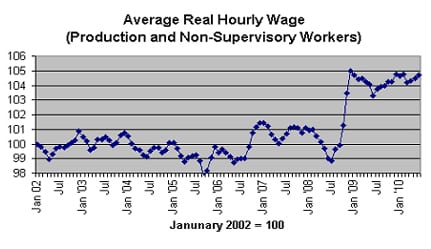 In the 1981-82 recession the baby boom cohort was between ages 17 and 36, years when workers change jobs frequently.  At present, they are between the ages of 46 and 64, years in which workers infrequently change jobs.  This means that much of the reason for the greater concentration of unemployment may be due to a change in the workforce rather than the demand side of the market.

Dean Baker is the co-director of the Center for Economic and Policy Research (CEPR).  He is the author of False Profits: Recovering from the Bubble Economy.  He also has a blog Beat the Press, where he discusses the media’s coverage of economic issues.  This article was first published by CEPR’s Beat the Press blog on 10 August 2010 under a Creative Commons license.