The unemployment rate edged up to 9.6 percent in August as the economy shed 54,000 jobs.  The decline was entirely attributable to the loss of 114,000 temporary Census jobs.  Excluding these jobs, the economy created 60,000 jobs.  With job growth for the prior two months revised up by 123,000, excluding the Census jobs, the August pace is roughly even with June and July. 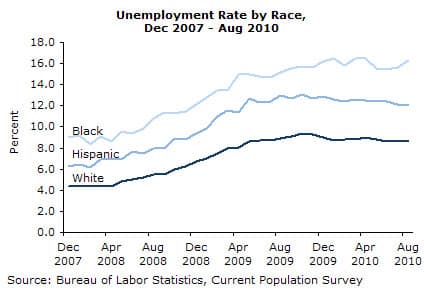 Involuntary part-time employment rose by 344,000, reversing declines in the prior two months.  All the duration measures of unemployment fell, but this likely reflected the long-term unemployed dropping out of the workforce as their benefit period ended.  The percent of the unemployed attributable to voluntary quits fell 0.3 percentage points to 5.9 percent, which is near its low-point for the downturn.

The only sector really showing much strength for the month was health care, which added 28,200 jobs.  Health care employment growth had slowed to an average of less than 16,000 per month in the first half of the year, but the sector has now added 51,000 jobs in the last two months.

Construction reported a healthy gain of 19,000 jobs, although given weak data on housing starts and a continued slide in most categories of non-residential construction, this is not likely to continue.  Manufacturing shed 27,000 jobs, reversing most of the 34,000 gain reported in July.  This was mostly due to the changed timing of shutdowns for model turnover in the auto industry.  This led to a 22,300 jump in jobs in July, which was almost completely reversed in August.

It is worth noting that this report provides absolutely no support to the view that firms are deferring hiring because of uncertainty about taxes and regulation, or that unemployment is increasingly structural in nature.  If uncertainty, rather than lack of demand, explained slow job growth, then we would expect to see the average workweek increase as firms required workers to put in more hours as an alternative to hiring.  We would also expect to see a big jump in temporary employment as firms contracted out for workers rather than bringing them directly on their payroll.

In fact, there was no change in the length of the average workweek and it is only slightly higher than its low-point for the downturn.  And, the biggest proportional increase has been in the restaurant sector where turnover is greatest and therefore the commitment to retaining workers matters least.  Jobs in employment services rose by 2,200 in August, but are still down by almost 20,000 from their June level and are down almost 1 million (more than 25 percent) from their pre-recession level.

The structural unemployment hypothesis fares no better.  This should imply more sectors where job growth is rapid and wages are rising as employers desperately try to attract skilled workers.  There is no sector that obviously fits this bill.  Interestingly, wages for production workers have been rising slightly more rapidly than the overall average, increasing at a 2.1 percent annual rate over both the last quarter and last year, compared to a 1.7 percent overall rate for these periods.  This suggests slightly larger nominal wage increases for less-skilled workers than more skilled workers over this period.

There is very little positive news in this report.  The only sector showing consistent strength is health care.  The uptick in manufacturing employment seems to have ended, suggesting, at best, modest growth in the sector through the rest of the year.  The growth in construction employment was an anomaly that will not be repeated.  State and local governments shed 10,000 jobs and will continue to lose jobs for the foreseeable future.  The weakness in the employment services sector and the lack of any upward trend in average hours suggests that there is no pent-up demand for hires anywhere.  With the stimulus winding down and house prices falling again, unemployment is likely to rise through the fall.

Dean Baker is the co-director of the Center for Economic and Policy Research (CEPR).  He is the author of False Profits: Recovering from the Bubble Economy.  He also has a blog Beat the Press, where he discusses the media’s coverage of economic issues.  This article was first published by CEPR on 3 September 2010 under a Creative Commons license.