Over the last three months, major price categories have seen decelerating prices, including housing and transportation, but inflation in recreation, education and communication, and other goods have also fallen in recent months.

However, the price of used cars actually fell 0.7 percent last month — the first such fall since before the cash-for-clunkers program began last summer.  While it represents only a single month of data, it may at last signal the end of the tight supply of used cars resulting from a program that removed nearly 700,000 used vehicles from service.  Even with the rapid (19.2 percent) rise in prices over the last 17 months, the price of used cars remains 9.5 percent below the 2001 peak.

Housing prices fell 0.1 percent in September as rents rose 0.1 percent and the more heavily weighted owners’ equivalent rent remained unchanged.  Owners’ equivalent rent of primary residences has fallen 0.1 percent since June of 2009, but non-shelter core prices have risen 2.3 percent over that same period.  The bubble-driven housing glut has resulted in real rents falling at a 1.9 percent rate over the last 15 months.

Amidst these price declines, food prices gained 0.3 percent in September.  Though this does represent an acceleration of inflation in this non-core category of goods, the 1.2 percent rate of increase in food prices over the last six months is still below the 1.5 percent rate of the previous six.

Medical care also showed accelerating prices, jumping 0.6 percent last month.  The faster inflation came in both commodities and services, particularly in hospital services — the price of which grew 1.5 percent in September.  Hospital services have grown at a 6.5 percent annualized rate — more than 5.7 percentage points over the core rate of inflation.

The price of imports has a significant impact on the balance of trade.  For example, the price of commodity imports from China has risen 0.3 percent since the end of 2003 — less than 0.05 percent per year.  By contrast, the price of those from industrialized countries rose 22.8 percent and the price index for all commodities has risen 15.2 percent over the same period.  Thus, the relative price of commodity imports from China have fallen, while those from industrialized countries have risen. 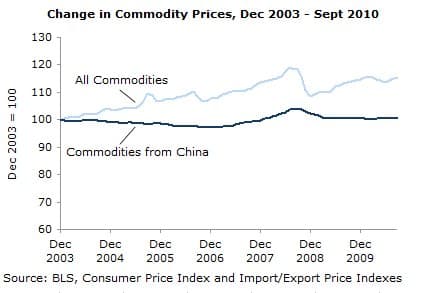 Since 2003, the trade deficit with China has doubled from about $10 billion to more than $21 billion per month, while that with Canada, Germany, and Japan has shrunk from more than $13 billion to less than $10 billion per month.  This provides even more evidence to support the Economics 101 argument that prices matter to buyers, and therefore exchange rate imbalances are significant drivers of trade imbalance.

Finally, the real wage fell by $0.01 in September.  Absent significant employment gains, it is difficult to discern how purchasing power of workers can possibly lead to increased price pressures.  As real rent prices continue to fall, and many commodity prices decline, there is a continued threat of deflation.  This leaves every incentive to manage a fall in the dollar, rebalance trade, and re-energize domestic production.

David Rosnick is an economist at the Center for Economic and Policy Research in Washington, DC.  This article was first published by CEPR on 15 October 2010 under a Creative Commons license.