The August Case-Shiller 20-City Index showed that house prices have resumed their decline, dropping by 0.2 percent for the month.  Prices fell in 15 of the 20 cities in the index for the month.

This picture is exactly what should have been expected given the end of the first-time buyers tax credit.  This credit had a disproportionate effect on homes at the bottom end of the market, both because first-time buyers were more likely to be buying relatively low-cost homes and also because the credit is a larger share of the sale price of lower-cost homes.

The credit reversed the price decline of 2008 and early 2009.  However, the reversal was accomplished primarily by pulling purchases forward.  The data show that sales plunged after the expiration of the credit.  This was first visible in the sharp drop in the mortgage applications index in the first weeks in May.  This index has stayed very low and shows no sign of increasing with data through the middle of October.  This indicates that the buying end of the market will be very weak through at least the rest of 2010, continuing the downward pressure on prices. 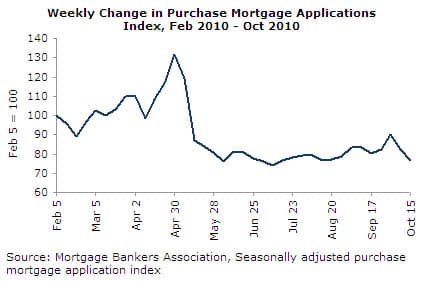 The sharpest price decline in August was in Phoenix, where prices fell by 1.3 percent.  The bubble there has fully deflated with nominal prices back to their 2001 level, but with prices falling at a 7.6 percent annual rate over the last quarter, it seems likely there will be some serious overshooting on the down side.  The next biggest price declines were in Dallas, 1.1 percent; Portland, 0.9 percent; and Seattle, 0.8 percent.

While prices may drift somewhat lower in Dallas, Portland and Seattle both have bubbles with substantial air remaining.  Prices are actually down slightly year-over-year in both cities — 2.3 percent in Portland and 2.4 percent in Seattle.  This decline is likely to accelerate now that the support of the tax credit has been removed.

Prices in the California cities all fell in August as the funding for the state homebuyer tax credit was largely exhausted.  The declines were relatively modest: 0.6 percent in San Diego, 0.4 percent in Los Angeles, and 0.3 percent in San Francisco, but these are also likely to accelerate.  The decline in prices for the bottom tier in the three markets was 0.5 percent, 0.9 percent, and 1.4 percent, respectively.

The September data on existing home sales also suggests that prices have resumed their decline.  While sales are up from the low-point reached in July immediately following the end of the tax credit, the 4.5 million annual sales rate is still down almost 20 percent from the sales rate of the first half of the year when the tax credit was in effect.  The September data also showed a sharp decline in both average and median sales price, both of which were slightly below their year-ago levels.

It is virtually certain that prices will continue to decline through the rest of 2010 and well into 2011, with the only question being the pace of decline.  Sales will undoubtedly continue at a much slower pace than was seen earlier in the year, with lower prices being the only way to clear the market.  Insofar as problems in documentation delay foreclosures, this could be a factor lending some support to the market by restricting supply, but it is unlikely to be a significant factor.  On the negative side, it is likely that interest rates will rise somewhat from their extraordinarily low levels, which will dampen demand further in the months ahead.

Dean Baker is co-director of the Center for Economic and Policy Research (CEPR).  He is the author of False Profits: Recovering from the Bubble Economy.  He also has a blog Beat the Press, where he discusses the media’s coverage of economic issues.  This article was first published by CEPR on 26 October 2010 under a Creative Commons license.